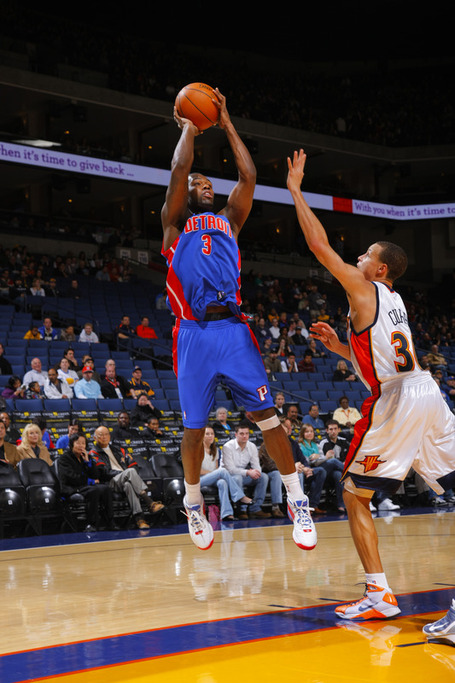 (With no "gifts of a superstar," You know the Pistons are bad when they can't even get Warrior fans out to the games)

In recent weeks, the Warriors have seemed to have perfected the Jeff Garcia strategy of the ‘comeback.'  Remember the first few years of Garcia's tenure with the 49ers where he amassed incredible stats despite the fact that they lost a lot of their games?   Well, a lot of those stats, if you all remember, came from scoring against their opponents who, plenty of times, had practically put the game away by the 2nd quarter.  Against soft defenses based around the notion of being a good sport to your opponent, Garcia little-by-little would make his ‘comeback' only to lose many games by a touchdown or so.

Well, the Warriors, as of late, have looked no different.  After being down by 14 near the end of the second quarter, the Warriors seem to lull their opponents to "play at their level."  Perhaps a team of d-leaguers or non-draftees fumbling the ball, stepping out of bounds inadvertently, and bricking wide open shots in the first half was a deliberate strategy on the Warriors part to fake their opponents into feeling overconfident?  Maybe this is ANOTHER groundbreaking coaching strategy/invention that Nellie added to his repertoire, much like his idea of the point-foward? Maybe Nellie is, now, using some psychology with this Xs and Os based off knowing the limitations of his players and perhaps other player's assumptions of the Warriors AND their crop of d-leaguer players as non-NBA worthy? In other words, this is a coach who's using his player's weakness AS strengths!  This is a hall-of-fame coach, no doubt!

For more about the game, click to continue reading... 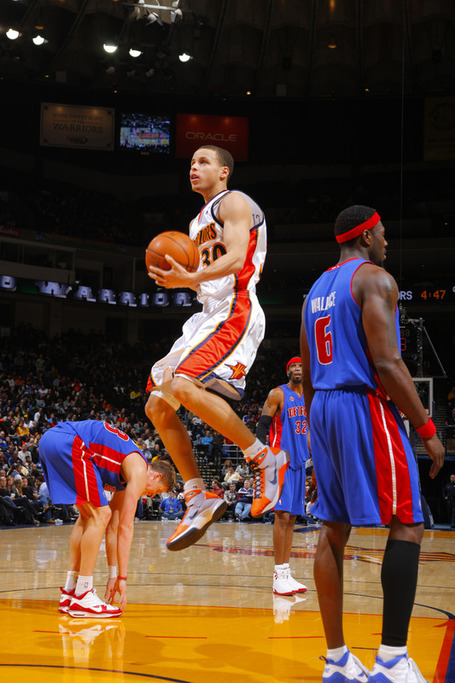 ("Touchin' his toes." Jerebko practices his dance moves for the after party at Suite 181)

We're just going to fast-forward to the third quarter where the Warriors finally seemed to get things together, perhaps based off my assumptions of Nellie's new ‘coaching strategies.'  Though the Warriors were not necessarily LESS sloppy in the second half (lazy passes a plenty), the Warriors seemed to find ways to, in the word of Tim Gunn on Project Runway, "make it work."

Here's what I learned from the Warriors in the second half, which I think were the keys to the game:

Anthony Tolliver:  His stat line was impressive and it definitely seemed like during the game he SLOWLY began to figure out how to be productive when he's unable to convert shots between 2-22 feet out.  Is it me or should Tolliver ONLY be shooting 3pointers if he plans on shooting from the perimeter?  Yesterday was the first day he shot 50% from the field.  The five games prior, Tolliver has been
"Biedrinsney," shooting 40% from the floor.  HOWEVER, he has also made close to 50% of this 3pointers during this span.  His assists were up this game and his give and the give-and-go with Turiaf and others showed some smarts of how to be productive without the ball. 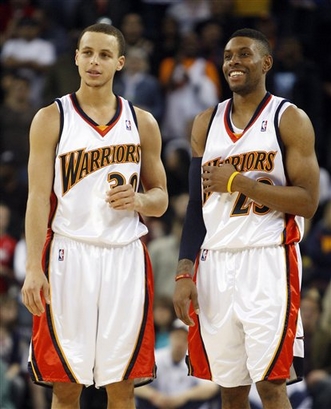 Assists:  I have never seen the Warriors pass the ball this much. And it often seems that this sentiment of sharing, "shared" by all (every player had an assist sans Chris Hunter), happens more often when Corey Maggette and Monta Ellis are out.  This argument will probably be statistically negated with real evidence from you statistics fiends.  BUT, I will say watching the Warriors brick shots off plays that involve ball rotation is much more entertaining than watching Monta or Maggette trying to take on their opponents 1 on 5, either getting stripped, blocked, or a turnover on a charge.  Heck, I would much rather watch the Warriors LOSE with passing than possibly win with little ball movement. 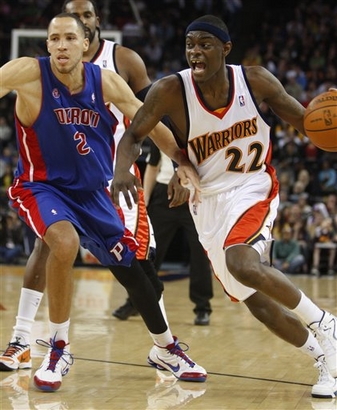 Rebounding: Turiaf, possibly the most physical (looking) Warrior on the team at this moment, cussed out his teammates after putting up a monster block on Charlie Villanueva, only to have Villanueva grab the rebound and score again.  The biggest problem about this, which Turiaf was so furious that his mantrum (adult male tantrum) involved barking expletives at his young teammates loud enough to be heard through the television, was that nobody helped Turiaf out after his tremendous defensive effort.

This tends to be the case, too, when Biedrins is often left to man the middle solo because of the Warriors poor perimeter defensive.  As much as I am frustrated by Biedrins complete lack of confidence at this moment along with his offensive inefficiencies, I do feel for guy as he's often left vulnerable defensively by his teammates who at times couldn't stop a turtle coming down the lane.  On offense and defense, you rarely see much team rebounding as it seems like everyone just takes off for the outlet passes.

After Turiaf's mantrum, it was nice to see all Warriors hitting the boards midway through the fourth quarter.  Often times you could see little CJ Watson in the fray, picking up a block late to preserve a late lead.  C'mon Warriors! Box out!  Defense is half the game!

Stephen Curry's ball handling skills: Besides Baron Davis, I, PERSONALLY, don't think the Warriors have had any one with play-making abilities.  I PERSONALLY think Steph Curry might be the first Warrior since Tim Hardaway to have any sort of court vision to go with his dribbling, shooting, and crafty dribble-drive penetration.  Together, this seems to make Curry particularly important for defenses to recognize by double-team, which often leads to his teammates being wide open on the perimeter or on the block.  Perhaps it was defensive error on the Piston's part, but Curry seemed to always be able to find his screener, whether it be Tolliver, Chris Hunter, or Ronny Turiaf wide open in the lane.  Maybe it was the Piston's overplaying Curry on the pick-and-roll, but I would like to believe that Curry's skill set forces defenses to be honest.  In all honesty, I don't see teams doing the same when Monta tries to run the pick and roll, which is probably because they know he'll never pass.  This isn't a knock on Monta as much as it is to say that maybe Monta shouldn't be the one initiating that type of offense.

Granted, the Warriors played their equivalent on the east coast, it was still impressive to see the Warriors somewhat endearing group of castaways and rent-a-players playing hard, smiling, and not making any OVERLY bonehead plays like cussing out refs, driving 1 on 5 only to get stripped, or chucking up a contested three pointer with 22 seconds left on the clock (ahem...Monta).

You will all hate for me this, but I give it to Turiaf.  His emotional outburst was exactly what this young, inexperienced, and non-physical team needed to win this game.  Although all the Warriors picked up their defense in the second half, it was Turiaf's defensive presence in the paint that to me proved to be game-changing.  Who was your Warrior Wonder?