Share All sharing options for: RECAP: Warriors 97, Rockets 119 - I Missed LOST For This?

Well okay, I suppose missing LOST could have been avoided. But since I was getting out of work late yesterday, I had to drop a record on the game. And since I started watching the game much later than the actual tip-off time, this crapfest which I now have to write about overlapped with the start of LOST. Granted, I also popped a record on LOST, but I just wasn't up to starting it in the post-game state of depression I was in, so I'm saving it for tonight.

Who has two thumbs and is excited?! 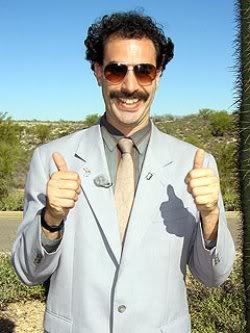 At this point, you must be wondering why I'm continuing to talk about the thrilling final season of LOST rather than touching on points of the Warriors game. If this is the case, I can only assume you didn't watch the game. You lucky duck...

Honestly, the first quarter of this game really made the rest painful to watch. In true Warriors fashion, they dig themselves out of their gigantic hole to make it a game, and then went on to show us an instant replay of their first quarter collapse. In the end, it was Beatdown USA. Population: Us.

At the risk of beating the same dead horse that has been mollywhopped for the previous 5 games (and entire season for that matter), I'm just going to throw out a few bulletpoints. Some will be highlights, others will be lowlights, and other will be just plain random. Feel free to guess which is which!

Overall, it's just more of the same. I'll save the front office the suspense right now; there is no D-League miracle that is going to come and save this team. Most of our core is riding pine with serious injuries and we're really going to have to accept the fact that we may go through the entire developmental league via 10 day contracts until we can get some of our guys healthy again.

It's going to be a looooooooooooong rest of the season.

How could it be anyone but Monta? Definitely a shining star of the evening among a dark sea of subpar play.