Gamethread #48: Warriors @ Dallas Mavericks - Can we beat them with only 5 guys?

Share All sharing options for: Gamethread #48: Warriors @ Dallas Mavericks - Can we beat them with only 5 guys? 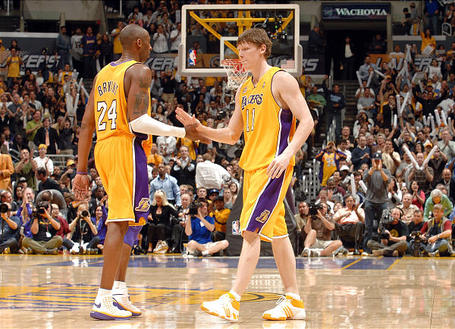 (Kobe teaches Coby a few veterans moves, like the high-five)

The Warriors learned quickly last night than everything is bigger in Texas as Houston's moderately meaty front-line destroyed them. It looked like David and Goliath. Or rather, the game looked like a varsity team playing against a freshmen team to stick with basketball themes, since well, this is a basketball site.

BUT, the Warriors take on the Dallas Mavericks, who like our dubs, are slumping like lounge chair. We all remember how the Warriors made history beating the Mavs with only 6 players on November 24, 2009. Dallas has always been a great pick-me-up for the Warriors and can we expect the new look d-league Warriors to have the same chance as they did last November? Will the Warriors possibly make history by sporting the first an all d-league and/or undrafted lineup with CJ Watson, Coby Karl, Anthony Morrow, Anthony Tolliver, and Chris Hunter? What are folks thoughts about Coby Karl's "Lebron-lite" stats (as Atma Brother #1 described it) from yesterday's game? Will he put similar numbers versus the defensively challenged Mavs? Will Coby Karl be GSoM's new man-crush for the next 9 days? All signs say yes.

The Mavs are currently on a 3-game slide and have been a relatively dismal (but phenomenal by Warriors standards) 2010, having lost as many games as they've lost.

Part of this could be attributed to the injuries that their bigs have sustained, though they continue to play through injuries. Lucky for us, Tim Thomas isn't playing tonight; he fits the Warrior Killer profile to the T: a one-dimensional player not traditionally known for scoring exploding for-one-night-only.

But with or without the bigs, the Warriors are a complete unrecognizable hodge-podge...chop-suey is you will. Unfortunately, the Warriors are not nearly as appetizing as chop-suey. The issues of chemistry, which Corey Maggette had highlighted a few days ago with players coming in and out of lineups, is apparent as passed balls have been seen sailing out of bounds. Players with no practice time, Cartier Martin and Coby Karl, are getting 20-30 minutes a game, which is unheard of on any other team in the NBA. It's a little surprising to see d-leaguers get as many minutes as our starters, but it's probably more out of necessity than anything at all. Though, I have to say I like Coby Karl's instincts and his ability to make plays for others ala Stephen Curry. Remember, this guy used to play with the other Coby, or rather Kobe, so you know he's trained with the best. Remember when we said that about Jason Caffey because he played with Michael Jordan for a few seasons...where is Jason Caffey now...hmm..

This is all to say, that tonight's game may be pretty awful. But, why interpret this game as a waste? On the bright side, you could say we're getting a glimpse of some of the greatest d-league talent broadcast on television. This "treat" is pretty rare on most occasions given how little publicity the d-league tends to get in American discourses of professional basketball.

So anyway, which d-leaguer on the Warriors are you most looking forward to watching tonight?

What are your predictions for today's game?