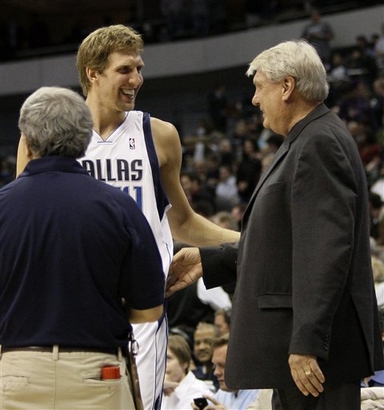 In the 20+ years I've been a Warriors fan, I've learned the hard way to temper my expectations.  Rather than huffing and puffing over poor passing, mental lapses like stepping or dribbling out of bounds, and missing wide open layups, I've come to appreciate the minor things (mini-comebacks) as opposed to the finer things (actual wins).  In fact, I will go so far as to call this Warriors loss a "win" (by some Warrior fans' standards) by how valiantly they came back to the close the 3rd quarter on a 16-6 run.  From being down 18 to 6, I consider this a relatively "tremendous" effort by a team that vaguely looks like the Warriors only by uniform homogeneity.   This counts as another moral victory.  With enough of these under our belt already, the Warriors are destined for the loser's playoffs: NBA DRAFT!

Onlxn's comment in his fan post "A Big Man That Could Help Us," perfectly sums up, in my opinion, last night's Warriors Woes (as opposed to Warrior Wonders):

More to the point, we suck.  And do you know the main three reasons we suck?  1) We're the worst-rebounding team in basketball, 2) we give up the second-most points in the paint of any team in basketball, and 3) we let our opponents shoot better from the field than any team except for the Nets.

Okay, now that we've confronted the Warriors woes head on, let's look at this game (and possibly the rest of the season) as an extended "pre-season" in preparation for next season.  As mentioned earlier, being a Warriors fan's involves some strategies for survival.  So as opposed to considering this a loss, this game, in some ways, seemed more like tryouts for next seasons' Warriors squad with all the d-league "talent" running around.  So let's evaluate this d-league talent versus a decent team in the NBA!

The knock on most d-leaguers (or players from other countries) is that they lack experience playing against the elite.  Well, the Warriors bench is filled with NBA hopefuls (Coby Karl) and wannabes (Chris Hunter) and tonight they played against the elites of the NBA: formerly elite player Jason Kidd, currently elite Dirk Nowitski, supposed-to-be-elite Drew Gooden, and purportedly future-elite Rodrigue Beaubois.  Our Warriors did not fair that well.

Coby Karl: I had dubbed him the Warriors fans' latest man-crush or "flavor of the month," but I think I spoke to soon.  After a statistically impressive (yet meaningless) game against the Rockets, Karl responded with a pretty  typical stat-line expected of a 10 contract player.  The one thing I like about Karl is that even when he's doing ordinary things or nothing, he does them super hard.  When he goes up for rebounds - several times with no one around him - he goes up with HARD, securing the ball with two hands and elbows stretched out to ensure no defenders come by to pop it out.  When he leads the break and just makes a simple dump pass to a wing player at the top of the key, it's the tenacity by which he brings the ball up the court that seems to impressive me.  He makes me think he's going to do something awesome, when in actually he doesn't.  Even when he's just running around "getting open" when it's clear that no one will pass him the ball, Karl looks like he's trying or at least trying to be a diversion in a pretty predictable offensive scheme.  Regardless of whether he has skills, Karl makes the ordinary things look exciting even if his results (play-making skills) are next to nil.  His chances of sticking with the Warriors?  I'll quote Jay-Z: "on to the next.. on-on to the next one."  Oh yea, Karl did grab 6 boards in 15 mins.  That's effective!

Chris Hunter: Chris Hunter has some flaws, like any player.  Benefits? He's got a big body.  Problems?  He seems pretty lost most of the time.  Hunter played a minute in last night's game and really doesn't get much of a chance at all now that Biedrins and Turiaf are back...not that he had much of a chance to before they returned.  You could say Hunter was relatively effective in his one minute, having a rebound and put-back dunk in his first play of the game.  But most of the time, Hunter can't seem to put it together.  Usually, he misses wide open jump shots from the wing.  Or worse yet, he can't finish in traffic, often times missing point blank 1 to 2 footers.  His future?  Back in the d-league ... or a lucrative contract in China. 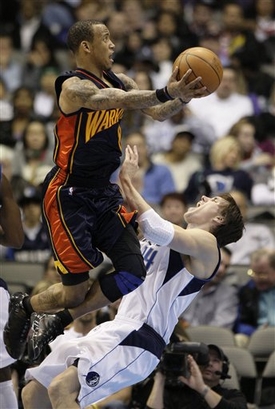 (Eduardo Najera, the Monta-stopper, if there was one)

Anthony Tolliver: We talked about this at-length already, but this guy needs to stop shooting.  Either that or he needs to start taking higher percentage shots.  Anthony Tolliver is quite an enigma to me.  He seems to have all the ability - decent handle for a big man and some quickness.  But he seems to play like he's playing a d-league game, which means he shoots with wreckless abandon.  He already takes more than a third of his shots from beyond the arc shooting a scintillating 14%.  In only 10 minutes of action last night, Tolliver seemed rather ineffective.  Tolliver has shown that he won't challenge anyone on the Warriors squad for minutes.  While he looks much more NBA ready  fundamentally at first glance than say Anthony Randolph or Brandan Wright at this moment, Tolliver seems relatively useless on both ends of the floor with a rebounding rate that is pretty disappointing for a guy his height and size.

This is all to say that the d-leaguers made me miss Kelenna Azubuike, Anthony Randolph, and even Brandan Wright.  Joni Mitchell was right, "You don't know what you got til it's gone."

Monta Ellis.  This is a no brainer.  It was just one of those nights where Ellis couldn't miss even if he wanted to.  His 3-point shooting has impressively improved over the course of the season and it's testament of his hard work on both ends of the floor.  Ellis' 4 assists hardly describe his attempts at getting his teammates involved as Warrior bigs dropped a few pretty passes in the paint early on.  His ability to score with a variety of jumpers, floaters, and drives over extremely athletic and towering-in-height wings two-nights in a row (Trevor Ariza and Shawn Marion) strongly suggests that Ellis is one of the elite scorers in this league.  A superstar?  Not quite.

But, I wonder about Ellis and Stephen Curry's ability to play together.  After earning rookie of the month honors, Curry has seemed to regress a bit with Ellis' return from his ankle injury, taking a back seat and regressing to a more passive role.  More specifically, he's not attacking the hoop necessarily and he's turning the ball over like it was November all-over-again.  I would argue against the belief that Ellis is a player that needs to dominate the ball to be effective or is unwilling to share.   Rather this leads me to wonder if Curry is THE player that needs to have the ball in his hands in order to participate.  Curry's statistically amazing January came when Monta was out, allowing him not only to score prolifically like at Davidson with dribble drives and 3 points shots, but also distribute in ways that Warrior haven't seen since Baron Davis.  But when he's not handling the ball so much, like last night, Curry just seemed to transform from a chariot into a pumpkin QUICK.  In what ways can Curry get more involved without forcing the issue?  There were a few times where Curry put up shots - going coast to coast and hurrying up a jumper from 20 feet with 20 seconds left on the shot clock - that looked more like "I haven't shot in a while" shots or "I need to get mine" shots, if you know what I mean.