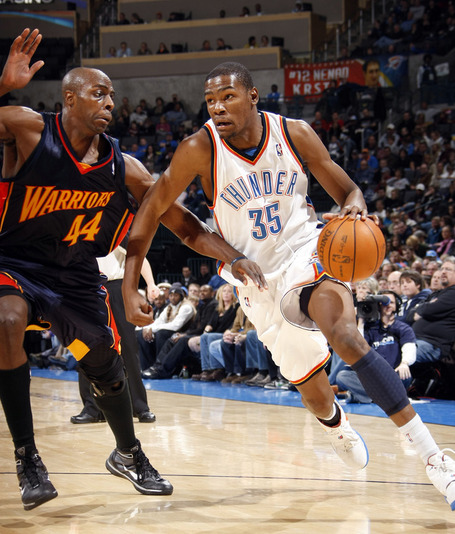 Ain't no Durantulas in the D-league.

Two games after beating the Warriors 112-104 at their place, the Thunder invade Oracle for a rematch, as -4 favorites. The Thunder are on a roll, winners of four straight, with three quality teams -- Denver, Atlanta, and New Orleans -- joining the Warriors as their victims. Kevin Durant is playing out of his mind, averaging 32.5 a game over his last 23 games to challenge

Carmelo Anthony for the scoring title.

The Warriors are on a bit of a roll themselves. In the opposite direction. The Warriors have lost seven straight, and are only 1 game ahead of the Minnesota Timberwolves for the title of second-worst team in the league. The Timberwolves. O the ignominy! So why do I like the Warriors chances in this game? My sixth-sense tells me that Don Nelson has a little change-up cooking, and the Warriors are going to bring the heat.

At 6-11', with guard-like skills, Durantula is one of the most unguardable players in the league. But the Warriors have an unguardable player as well, the player Corey Maggette calls Mr. Incredible, Monta Ellis. Three games ago against the Thunder, Monta was still rusty in his return from injury. He no longer looked rusty putting up 46 against the Mavericks in the last game. I expect Monta to bring it in this game, on both ends of the court. Nellie uses him to guard Durant, and this is a good choice. The best way to slow Durant down is to disrupt his dribble and deny him penetration, which is something Monta excels at. If Durant starts missing from outside, the Warriors are in business.
Jeff Green hurt the Warriors badly in the last game. Anthony Tolliver couldn't stay in front of him, which pulled Biedrins and Curry off their own men to give help. I expect Nellie to change something up here. Tolliver's minutes have diminished in the last two game, also against athletic fours (Landry and Nowitzki). Nellie might start Turiaf at the four, as he did against Dallas. But at some point I expect him to go to Devean George. George played great defense against Nowitzki in the last game, and also shut down Carmelo Anthony in the fourth quarter of a previous game this year. I think Nellie calls for the Deveanator on Green. 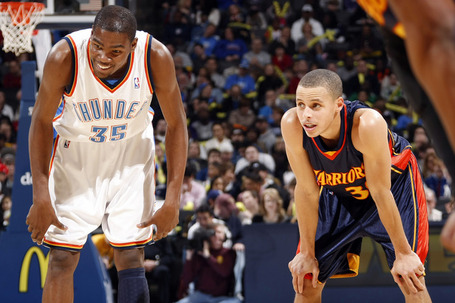 What's the matter, kid... tired?
Curry appears to have hit the rookie wall hard, starting with the game in Oklahoma City, in which he went 4-10 with 5 turnovers and was pulled down the stretch. Curry will have his hands full trying to keep Russell Westbrook out of the lane. Westbrook shot 17 free throws in that last game. With two days rest, I think Curry will do better in this game, and the Warriors as a team will do a much better job staying in front of their men.
Predictions:

Who scores the most points in this game?