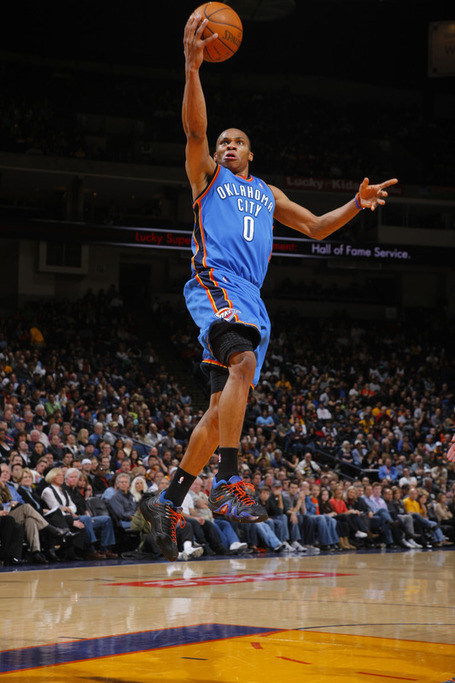 I'll take a plate of Monta Ellis, with fava beans and a fine Chianti.

OK, I'll admit it, I underestimated the Thunder. They are pretty darn good, and not just because of Kevin Durant, who is all-world. The reason they are pretty darn good is their defense, which is spectacular. It is led by Russell Westbrook, who picked up 8 steals en route to a near quadruple double in this game. 21 points, 7 rebounds, 10 assists and 8 steals. Tasty. Westbrook is taking on the look of a bigger, stronger Rajon Rondo. Thabo Sefolosha and James Harden are also terrific on-the-ball defenders. The Thunder backcourt, aided by the terrific length and quickness of Durant and Jeff Green in the paint, hounded Monta Ellis into one of his worst games of the season. Monta shot a miserable 6-22 for 15 points and turned the ball over 7 times.

The rest of the Warriors, who rely heavily on Monta to initiate their offense, weren't much better. In all, the Warriors turned the ball over 22 times in this game, leading to an enormous deficit in fast break points.

A lot of the credit for the Thunder's play goes to their coach, Scott Brooks. Brooks had a great defensive game plan for the Warriors, using the extraordinary defensive ability of his backcourt to trap the Warriors' ballhandlers at the top of the key, and deny the Warriors' entry passes with overplays. And in general this season, Brooks has the Thunder playing at a really high level on defense. They are allowing 7.3 fewer points a game this year, while increasing their scoring by 1.6 points a game. And the Thunder have the fifth best road-record in the league. A heck of a coaching job, of a team that is rapidly headed for greatness.

It's safe to say they're a little better than the Warriors at the moment.

Monta Ellis: When listing the reasons the Warriors lost this game, you have to begin and end with Monta Ellis. As currently constructed, the Warriors cannot win unless he is the star of the game. Monta had a miserable night: Game Over. 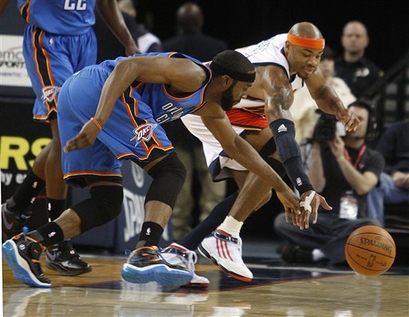 .3 seconds from making Feltbot pass out.

Corey Maggette: There is an element of grossness to watching a Corey Maggette season. It's like watching a Rocky fight going into the late rounds. There is blood, there is swelling, there is feverish work by the corner man. Tonight we were treated to the lovely sight of Maggette's left hand ring finger getting ripped out of its socket. At the time of the injury, in the first quarter, the Warriors seemed to be really playing well, and I think the air went out of them a little when he went to the bench. Which is not to say the injury caused this loss. This Thunder team is really good, and the Warriors are not.

But major props to Maggette for slapping a little tape on and playing through excruciating pain. I couldn't sit up in b ed after an injury like that, but Maggette put up a line of 24 and 6 on 50% shooting. And he took the challenge of guarding Jeff Green. Like Rocky, Maggette answers the bell.

The Centers: Well at least I got one prediction right: Biedrins had his best game of the season, with 18 rebounds and 3 swats. But offensively, he really stunk. He has yet to develop a chemistry with his point guards, which led to several turnovers. And he inexplicably went to his right hand for airballed jump hooks rather than drive to the basket. Jim Barnett had an explanation for that: "He doesn't want to go the free throw line."

On one memorable play at 7:25 of the third quarter, Biedrins caught the ball in the low post, used his off hand to hitch up his pants while the defense got set, then threw the ball out of the double-team straight to Russell Westbrook for a fastbreak slam. Check it out. I'm not sure I've ever seen that move from a post player before.

Turiaf had a decent game. I saw him finish one pick and roll in style with a slam, but lose the ball on another. The Warriors really need to get better at this play. 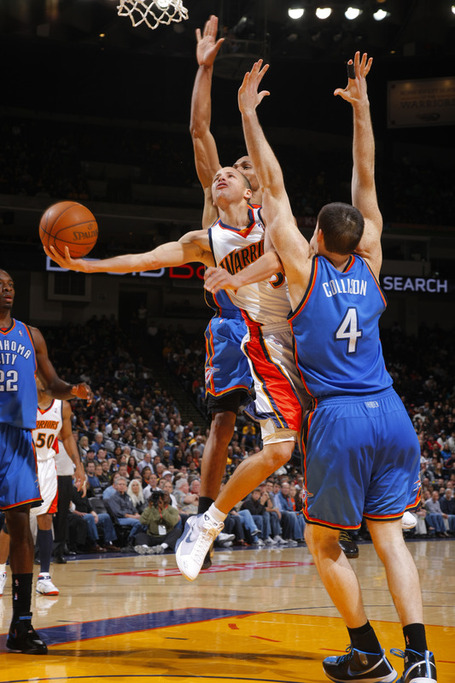 The Thunder allow a wide-open shot.

Stephen Curry: A nice bounce-back game from Curry, picking up 23 points on 9-15 shooting. He has one of the quickest releases in the league, and needed it to get his shot off against the Thunder. Unfortunately his time on the court was limited by foul trouble trying to stay in front of the super-quick and physical Westbrook.

Anthony Morrow: Looked pretty good in his first game back. It was nice to see him bury his first two shots. Unfortunately, there is not one single player on the Thunder whom he can guard. 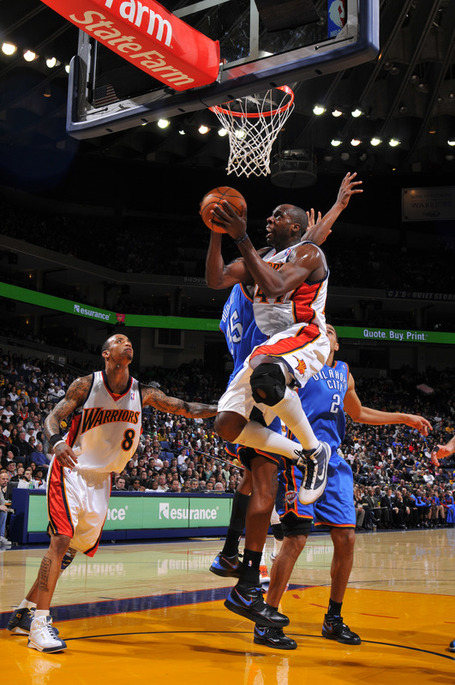 The D-League All-Stars: The piano is no longer on Anthony Tolliver's back, as the Warriors just signed him for the rest of the year. And boy did he respond with a great game. 11 points on 5-10 and 11 boards. These are the things I saw Tolliver do in this game: Move his feet and guard Jeff Green. And then move his feet and guard Kevin Durant (Wha?). Hit his jumpers, including a three. Make a pump-fake, drive the lane and nail a teardrop (Wha?). Box out and rebound in traffic. Steal the ball from Russell Westbrook.

Welcome to the NBA, Anthony Tolliver. 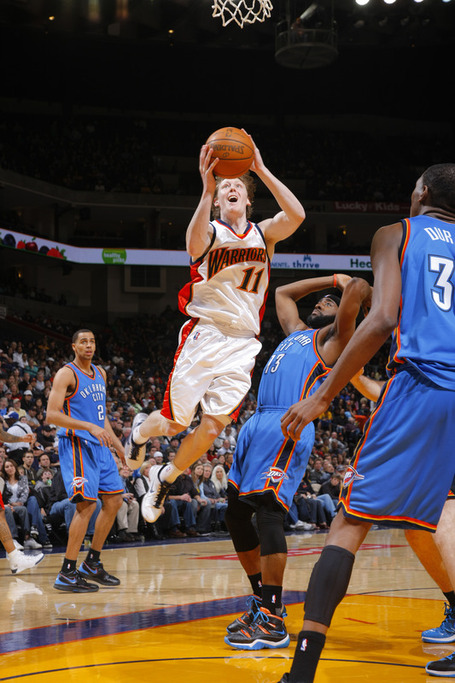 The Coby Karl report is not so good. He did a nice job on Kevin Durant in the first half, working Nellie's game plan to perfection by getting in his shirt and pushing him right, funneling him into traps. Durant was held to 3-11 in the first half, en route to a sub par 7-21 shooting performance.

But on the offensive side of the ball, Karl's play was disastrous. Nellie used him a lot at the point-forward, presumably to avoid the ball-hawking of Westbrook and Sefolosha. It didn't work. Karl looked flustered all night, turning the ball over 3 times against only 1 assist. I lost count of the airballs he shot en route to a 4-12 performance.

And his drives. To describe them as wild would be an understatement. To my eye, Coby Karl driving the lane looks like The Bug in Men in Black, in his Vincent D'Onofrio suit, chasing the cat with the galaxy on its neck. I wonder, does he do a jack-knife when throwing his gum away?

At the end of the game, the crowd was giving him the Mike Dunleavey treatment, booing his every touch. If he doesn't settle down rapidly, this could get ugly.

I could give it to Anthony Tolliver, for a truly NBA-worthy performance. But this one goes to Corey Maggette.