Share All sharing options for: GAME THREAD #50: Mavericks vs Warriors – Can they make it 9 in a row? 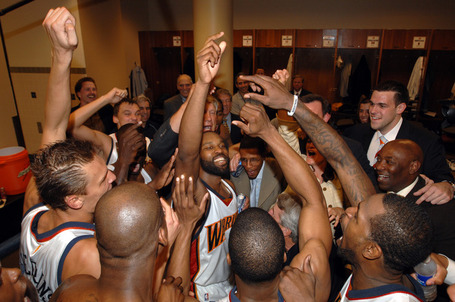 The Dallas Mavericks come into Oakland tonight after losing to Minnesota at home. They lost to one of the two teams that are actually worse than the Warriors. How does that happen? Well I have no idea, but I just know that the Mavs are not going to be very happy and might just take it out on our D-League squad.

The Warriors on the other hand are on an 8 game losing streak with no hope for anything other than more losing. With Minnesota winning (they've now won 4 in a row), the Warriors are now dangerously close to becoming the worst team in the Western Conference and the 2nd worst team in the NBA. Minnesota is 13-38 while the Warriors are 13-36. Waiving Speedy Claxton to keep Anthony Tolliver may be the key to the Warriors claiming last place in the Western Conference. They can't catch the Nets, but they can certainly catch the Twolves for overall suckage.

Just a few days ago, the Warriors faced these same Mavericks in Dallas and lost 110-101. The score ended up being much closer than the actual game. The only bright spot in that game was the 46 points scored by Monta. I have a feeling by the end of the year, he's going to score 50+. I also have a feeling that by the end of the year he'll have a game where he shoots more than 40 shots. Those two predictions might come on the same night. Anyways, perhaps tonight will be that night.

You know the Mavs, you unfortunately know the Warriors too well. Hopefully the Warriors surprise us with a win. Don't hold your breath though. On to the predictions...

Who do you want to win?