Share All sharing options for: Why Don Nelson is the Best Coach for the Golden State Warriors 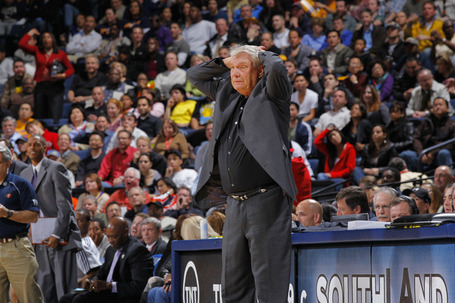 Tim Kawakami has just published a piece in the Merc + Talking Points calling for the firing of Don Nelson. I disagree essentially with every line of what he has written, and in particular with his conclusion. I think it would be a huge mistake for the Warriors to fire Nellie. Here is my rebuttal.

This team was built by Don Nelson, for Don Nelson: From the frontline to the backcourt, this team was built to do one thing, and one thing only: Run, Run, Run. Biedrins, Randolph and Wright are all at their best when beating their man down court, and at their worst when playing in the half court. Monta Ellis and Stephen Curry can excel in any system, but may be the best fast break backcourt in the NBA. Ellis because of his blazing speed, Curry because of his extraordinary downcourt vision and ability to lead the break.

Putting what promises to be the fastest team end-to-end in NBA history -- when healthy -- in the hands of a conventional coach is a recipe for disaster. This is a Nellie roster, and Nellie should coach it.

Don Nelson has the ear of this team: Has any team in the NBA played harder than the Warriors this year? Seriously, in a season completely without hope, has this ridiculously short-handed and undersized team ever dogged it? Ever shown signs of quitting?

This team believes in itself, and takes the court every night looking for a way to win, against all odds. I don't pretend to have my finger on the pulse of the locker-room, but that is simply not the behaviour of a team that has quit on its coach.

Don Nelson does not have a preference for small ball: For those of you who have scratched your heads, or raged in your hearts, when you've seen Don Nelson play Corey Maggette at power forward ahead of Brandan Wright and Anthony Randolph, this might seem like a curious statement. It's not. I stand by it 100%, based on close observation of Nellie's career since RunTMC.

Don Nelson has had four major coaching gigs: coaching the Bucks, the Warriors, the Mavericks, and again with the Warriors. The only time Nellie has played small ball is with the Warriors. While at Milwaukee Nellie traded for Bob Lanier, and drafted Marques Johnson. In Dallas, once he got his hands on Dirk Nowitzki, Nellie played one of the biggest lineups in the NBA. Every game, all game.

Even with the Warriors, it should be obvious to an objective observer that Don Nelson has always worked determinedly at making his team bigger. He blew up RunTMC -- risking the chemistry of a 50-win ball club -- by trading Mitch Richmond for Billy Owens. Is that the act of a man with a preference for small ball?

And then there's the money. There is little doubt in my mind that if Nellie had the resources of a Mark Cuban or a Paul Allen to work with that he would have long ago gone after and signed a major free-agent big man, or multiple free-agent big men. He's already proved that, in Dallas. Every single year he was there.

Nellie doesn't have those resources to work with. He has the resources of Chris Cohan to work with, and an inherited roster that lacked an established power forward. What he does have right now is this: three assets. Brandan Wright, Anthony Randolph and a lottery pick. On the basis of those assets, and my knowledge of Don Nelson, I am very comfortable saying this:

If the Warriors come out of the gate next year playing small, I will eat my shorts.

Don Nelson is one of the best coaches in the league at achieving point-differential. His 2002-3 Dallas Mavericks led the league in point-differential. And if Dirk Nowitzki hadn't injured his knee in Game 3 of the Western Conference Championships against the Spurs, Nelson and the Mavs may very well have won the title.

How does Don Nelson achieve point-differential? Well, that could be the subject of a book. But here's a thumbnail sketch: it involves having at least one big wing player who's capable of shutting down the opposing team's best player. Like Richmond, Elie, Sprewell, Finley, or Stephen Jackson.

Or Kelenna Azubuike and Raja Bell.

It might involve having a couple of other defensive pieces to play matchups with. Like Josh Howard and Eddie Najera. Or Matt Barnes. Or Andris Biedrins and Anthony Randolph.

It involves genius, and the complete and utter fearlessness that has led to glorious playoff upsets - with far inferior talent -- of the Robinson Spurs, the Stockton and Malone Jazz and the Nowitzki Mavs.

Don Nelson is not a defensive coach, he is a basketball coach. One of the greatest in league history.

I want to see it again: I've seen it before. RunTMC. The 2002-03 Mavericks. We Believe. Some of the greatest, most exhilarating basketball ever played in this league.

This team is built in the image of Don Nelson. It is arguably one big player -- and one healthy season -- from being able to play like the best of Don Nelson's teams.

I want to see it again.