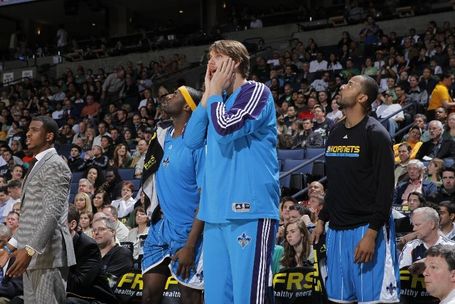 ...as Bob Fitzgerald mentioned towards the end of this 4th quarter.

Down 21 points at one point during the fourth third quarter, would you expect the final stats for the Warriors to look like this:

Would you ever in your mind think that a squad of former d-leaguers and undrafted players, teamed with perennial role players like Devean George, could help lead a balanced and not to forget comeback attack against a semi-mediocre team with mostly 1st round draft talent?  Anthony Tolliver had his Lebron James-like moments swooping to the hoop powerfully, which my girlfriend said "wow, that looks fun!"  Reggie Williams shot like a 3-point shootout contender.  And Devean George came off the bench for some instant offense, Corey Maggette-style.

If this wasn't wacky enough, Monta Ellis had 13 assist.  The dude who has at times been dubbed selfish by myself and many others, had a 4:1 assist to turnover ratio tonight.  Now THAT is Steve Nash-like!  And  you know me, I would never put Monta Ellis and Steve Nash in the same sentence, unless I wanted to say what I wish Monta Ellis could be more like.

Was this truly the wackiest Warriors game you've ever witnessed? 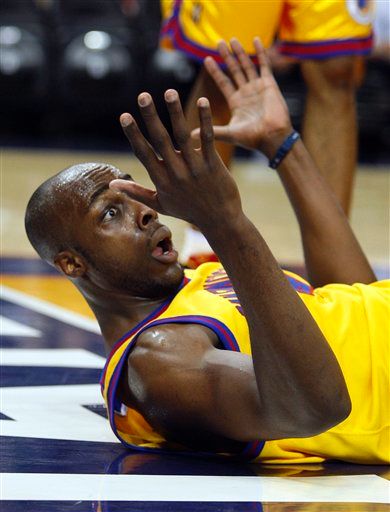 The Warriors began their typical mid-game self-destruction by letting the New Orleans Hornets get way too many second chance points.  Little-to-no boxouts and the same amount of non-existent closeouts on three-point shooters hurt them badly.  They were just getting outhustled and muscled down low and it looked as if the Warriors were just ready to celebrate St. Patrick's Day after the game with the way they were playing.  On the offensive end in the beginning of the third quarter, Maggette, Ellis, and CJ Watson seemed to be competing to see who could shoot the ball with as much time left on the clock.  Maggette wins every time.

Then Devean George checked into the game, igniting a comeback that Whitney Houston could only dream of...or only Michael Jackson could materialize (RIP).

Maybe it was Devean George's mere presence.  Perhaps it was his "veteran-cool" that calmed down this inexperienced team.  Or maybe the Warriors just started playing some good defense which led to some easy buckets?  Yes, most likely the latter.

At any rate, the Warriors d-leaguers put on quite a show and seemed like real NBA players versus what I like to call "irregular clothes" which you would see at factory outlet stores.  They look hot at first glance (great stats).  But once you take them home, you realize that the pants you bought only have one pocket in the back.  Plus the zipper is missing so technically can zip them up either (can't convert easy lay-ups). 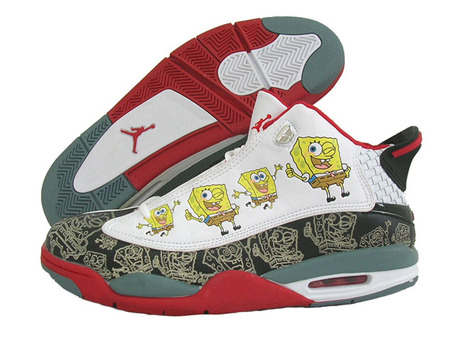 (If Anthony Tolliver wore these pair of these fake Sponge Bob Nike Dub-zeros, would you still rock em? OF COURSE BECAUSE THEY HOT!)

All of a sudden Chris Hunter transformed into what Atma Brother #1 believes to be the Warriors version of Patrick Ewing.  He owned the paint on both ends of the floor manufacturing points of tip-ins.  He cleared space on defense AND offense, not just grabbing boards but scoring off a few nifty spins moves.  In one sequence during the fourth quarter, Hunter got his own rebound after getting blocked and went straight back up for two points.  Granted, Hunter was mostly matched up against Darius Songaila, who's hardly the shotblocker or defensive presence that is Emeka Okafor.  We haven't seen a Warrior defend the paint like this since Marc Jackson, who we owe much for the GSoM philosophy.

Reggie Williams might have had the prettiest jump shot on a Warriors team since Chris Mullin.  And unlike Anthony Morrow, Williams can hit jumpers with people in his face (no-disrespect to Morrow of course).  I kind of wish the Warriors would continue to feed him the ball like the Hornets did Morris Peterson.  He helped spark the second half comeback with several consecutive 3 point shots.  Would you keep Reggie Williams after this amazing display of 3-point shooting?  Especially on a team that, aside from Curry, cannot really make open jumpers with much consistency?

But besides their great scoring capabilities, the chemistry between the d-leaguers - Williams, Tolliver, and Hunter - was amazing.  They were willing to make the open pass to find each other, often times cutting through the lanes for easy buckets.  On several occasions, you could see Anthony Tolliver coming down the lane and dishing to Hunter at the block for an easy lay-in.  Or once Hunter got hot in the second half, Ellis would make a post-entry pass to Hunter who would then see an open man cutting or a wide open for a three.  The ball suddenly flowed much better in the second half and these d-leaguers led the way with their hustle, unselfishness, and clutch plays on both ends of the floor. 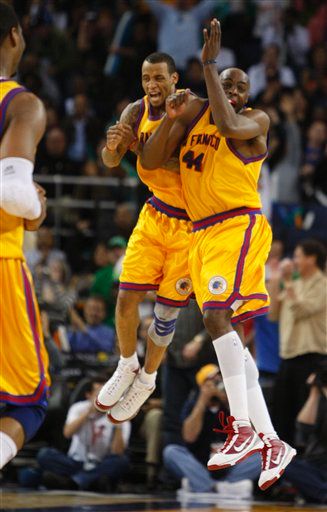 (Monta Ellis and Anthony Tolliver are about to take this celebration to an Irish pub!)

I won't say too much about Ellis not because I didn't find him to be great, but mostly because I thought it was exceptional how the d-leaguers really stepped it up.  But Ellis' defense definitely needs to be accounted for as he played some great defense against Darren Collison at some points, coming up with some big time stops.

This wasn't an exceptional win by any means.  The Hornets were without Chris Paul and Peja Stojakovic.  Darren Collison had another Steve-Nash-like offensive game and David West had unstoppable fundamentals, fadeaways, putbacks, kissing shots off the glass... he really could do it all.  But, it was still an impressive victory nonetheless for these d-leaguers fighting to find a spot in this league.  Based off their performance tonight, there are plenty of reasons why they could be. 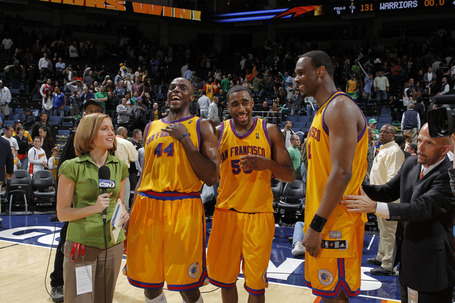 This is tough so I am just going to give it to the trio of d-leaguers: Anthony Tolliver, Chris Hunter, and Reggie Williams.  Together, they accounted for 67 of the Warriors points, 18 rebounds, and 8 steals.  Can we call them the Warriors new "Big 3"?  Or at least they could be the "big 3" of the Warriors upcoming summer league?