In preparation for the Warriors upcoming trip to San Antonio aka the house of horrors where they've lost a remarkable 23 (TWENTY-THREE!) straight, our friends over at San Antonio Spurs blog Project Spurs wanted the 411 on the Dubs. 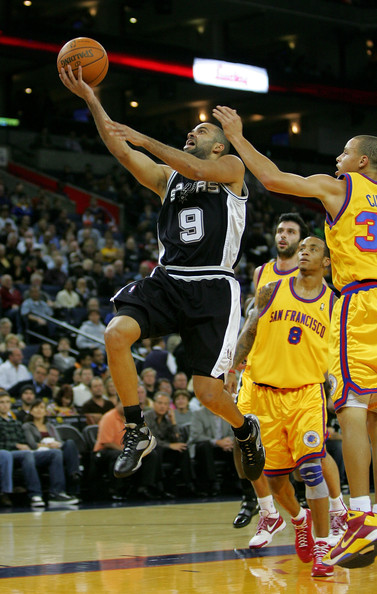 The kind of defense that causes 23 straight losses down by the river walk.

Our friends at Project Spurs are asking GSoM...

1. The Spurs have not lost at home to Golden State since 1997. What will the Warriors have to do to make sure the streak doesn't get to 24 straight games?

2. What are your thoughts on former Spur and Project Spurs favorite Anthony Tolliver?

3. The Warriors seem to always find gems in the D-League. Is that because of good scouting or pure luck?

4. Are Raja Bell's days numbered being a defensive specialist in Golen St? Yes I said Golen.

5. Monta Ellis and Stephen Curry seem to be very similar players, except Ellis is more athletic. How have they co-existed?

6. What is your key matchup for this game and what's your prediction?

1. First things first and I hate to be harsh, but there's one thing in common between the Warriors and Spurs. Their window has closed.

Okay the Warriors "window" was never really open aside from a hot minute in the spring of 2007, but neither of these teams are even in the running for the O'Brien trophy.

But back to your question. What can the Warriors do to stop 24 straight L's in San Antonio?

Is Michael Jordan in the D-League? CALL HIM UP!

2. I don't believe there's a Dubs fan out there who isn't rooting for Tolliver. I love his hustle, energy, desire, and demeanor. Tolliver belongs in the NBA and hopefully there's a spot for him next season on the Dubs. 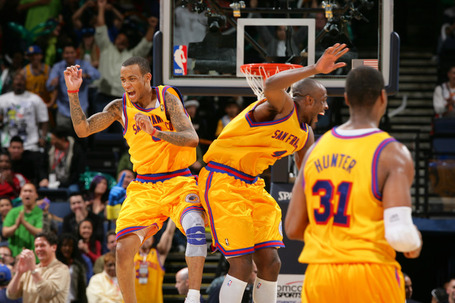 Monta and Ant bust out a little Rumpshaker a la Wreckxx-N-Effect.

3. I don't think it's luck. Larry Riley (a former scout) and the Dubs work hard at mining the D-League for hot prospects. It also helps to have a coach like Don Nelson that is very open to giving D-Leaguers a shot. I remember a year or two ago Nellie said something along the lines of a D-League call-up being more often a mid-1st round or 2nd round draft pick in terms of present-day production.

Also, I really want to give it up to the D-League. Don't sleep. The D-League is legit! Across the vast majority of the 30 teams in the association the difference between their 10th, 11th, and 12th men and the top D-League talents isn't all that substantial.

Think I'm being ridiculous? You ain't seen nothing yet. It doesn't get any more ridiculously wonderful than Ridiculous Upside. They should really change their slogan from just "NBA D-League Coverage" to "NBA D-League/ Coverage of Future Golden State Warriors"

Goleń [ˈgɔlɛɲ] is a village in the administrative district of Gmina Piecki, within Mrągowo County,Warmian-Masurian Voivodeship, in northern Poland.[1] It lies approximately 5 kilometres (3 mi) south-west of Piecki, 15 km (9 mi) south of Mrągowo, and 52 km (32 mi) east of the regional capitalOlsztyn.

Before 1945 the area was part of Germany (East Prussia).

5. I used to say this back when the Warriors were wasting the talents and hyper-athletic years of Baron Davis and Jason Richardson by foolishly teaming them up with a hideously unathletic and weak frontcourt of Mike Dunleavy, Troy Murphy, and Adonal Foyle (thank you Chris Mullin):

The Warriors backcourt has problems, but the Warriors frontcourt is the problem.

They have coexisted because there's simply enough shots and possessions to go around for both Curry and Monta in Nellieball. They'll be fine on that side of the rock. Defensively is different, but that's another issue for a different time.

The real concern is the Dubs front court. Centers Andris Biedrins and Ronny Turiaf have both had terrible seasons. Anthony Randolph got off to a very weird and inconsistent start and Brandan Wright has been out the entire season. 4 and 5 are the problem areas for this team. The real question is not whether Curry and Ellis can play together, but whether one of them can be used to upgrade the 4 or 5 significantly in the near future. Until the front court is upgraded or makes big strides, this team is going nowhere.

6. Tim Duncan will get his. Manu Ginobili will get his. But the Spur I'm most worried about going off for a career night and being Friday's night's Warrior Killer is DeJaun Blair. 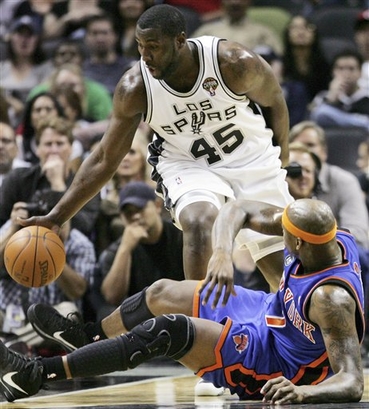 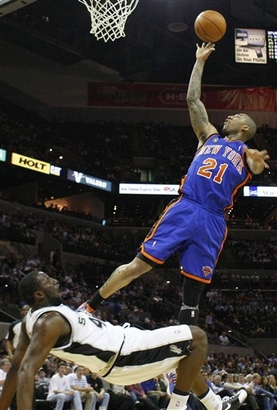 Prediction? Warriors by 1 and longtime GSoMers know what that means.

Make sure to check out Project Spurs and Pounding the Rock for everything you ever wanted to know about the Spurs and more.