I'll keep this quick as Tony.psd and I were at a private season ticket holder event this past afternoon (more on that tomorrow morning) that kept me from the job that (barely) pays my bills and I've got a ton of work too catch up on. After tonight's 24 point loss making it quick is probably a good thing. 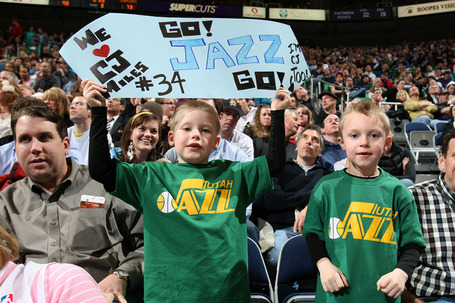 With only 8 dressed (again) the Warriors sure could have used "CJ TOO!" tonight.

Before we get to the game, since we've got a national audience tonight plus some folks from Utah I'd just like to publicly reveal myself as a real deal Salt Lake City, Utah hater and not just because of that horribly officiated 2nd round of the 2007 NBA Playoffs. It dates back to this road trip my main man and co-GSoM conspirator DJ Fuzzy Logic and I took from the Bay Area to Ann Arbor, Michigan nearly 5 years ago. Digging deep in the legendary Hyphy Bloggin' Network Archives:

I've always had a soft spot in my heart for Salt Lake City. Everyone likes to clown them, but I've always thought all those lake landscapes were kinda cool. I mean Andre Kirilenko (a Utah Jazz player) is a great fantasy hoops draft pick- how bad could this town be?

We finally got to the SLC at about midnight. Half awake we stumbled like drunk men up to the front counter of another AAA discounted motel. Before we could even say "We'd like your most luxiourious suite here at Motel 6" the motel clerk warned "The whole town's booked up for a retail convention. 95,000 people here in Salt Lake. Sorry."

Who would have thought that both Wendover and Salt Lake City- two spots in the middle of nowhere- would both be booked on the same night? Was it just our bad luck? Or was the adventure just beginning?

That night's soundtrack didn't help either. I swear I heard rattle snakes and raccoons. I didn't actually see any raccoons, but before that night we had 10 bottles of water that Fuzzy's mom packed for us. After that night we had 1 bottle. There was only one logical explanation for this mysterious disapearance- the racoons stole our great California bottled water.

The next morning we decided to take a quick tour of the city before we continued on I-80 East. We were a little worried about the traffic from those 95,000 people invading the streets of the SLC, but we looked at it like this- when would we EVER be in Utah again?

So what did we see? A ghost town. I don't think we saw 95 people outside total roaming the mean Morman streets of Salt Lake. We started to realize that the only convention in town was the King Klan Konvention (marinate on that abbreviation for a second).

Disgusted by the Konvention that forced us to the VW Suite, we were happily surprised to see the love the Jazz fans at the Delta Center gave to the Golden State Warriors BLOG, another member of the Hyphy Bloggin' Network (HBN). 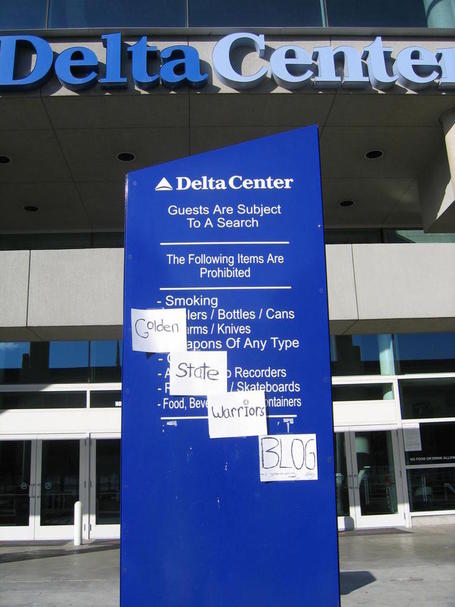 Rating: 2 stars. The multiple wives state probably would have gotten a 3 for that mysterious luv for our Warriors from those Jazz fans at their home arena, but the lies about all the hotels in town being booked were shady like Martha Stewart on eTrade.

See Harold and Kumar... Episode 0 [The Free Shai World Report] and i-80 east... [Two Turntables and a Blog] for much more. (Seriously why didn't we all retire from this goofy blogging game back then? We weren't funny then and we aren't funny now. Well at least we're good looking- EXTREMELY good looking to be more accurate.)

Oh yeah I guess there's some game I should write about too... 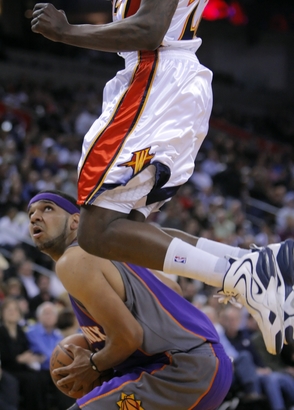 I never realized Morrow was so tall.

Since Reg-gie! Reg-gie! Williams has caught fire there hasn't been that many minutes to go around for Morrow and he hasn't crossed the 20 point mark in 10 games. All of the Dubs had a negative plus/minus tonight, but he was the "least negative" at -6. He only hit 1 of 4 tries from downtown and wasn't his usual NBA Jam style HE'S ON FIRE, but it was nice to see him drop 21 points and collect 5 rebounds in a little over 28 minutes of action.

Now let's sleep this L off.

Make sure to check back tomorrow morning for a report on today's private season ticket holder event!