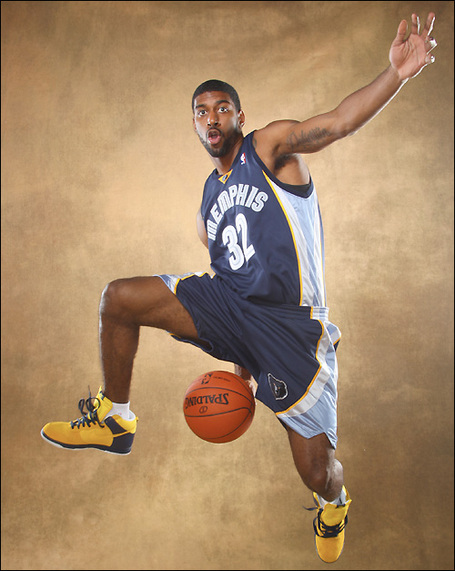 O.J. knows how to put a little extra mayo on his passes. [photo via via www.reclinergm.com]

When the Warriors were offered this trade by the Grizz what did they do of course? Nothing, absolutely nothing.

Over at SFGate Bruce Jenkins investigates why this trade that has been rumored to be offered by the Grizzlies on more then one occasion didn't go down:

As yet another depressing season winds down, it is becoming clear that Don Nelson no longer runs the Warriors. If he gets shut out of major trade discussions, that's the only conclusion one can draw.

Two sources close to the Warriors told The Chronicle that when the club rejected a trade-deadline deal that would have sent Monta Ellis to Memphis for O.J. Mayo and Hasheem Thabeet, Nelson wasn't even consulted. It's not clear who made the decision, but it was news to Nelson, who hadn't even heard the Grizzlies' proposal.

Not only that, the two sources said, but Nelson would have made the deal. "In a heartbeat," said one.

But let's sip a little orange juice because the beat goes on. As I stated previously:

Shoot, on names alone I do this trade.
A Curry & O.J. or Curry & Mayo backcourt? Stef-fun and O.J. putting on a Mayo Clinic regularly against other backcourts across the association by 2012? Thabeet rejecting shots in Oaktown like Adonal Foyle?

Here's some other variations of the trade to pursue if Cohan and Rowell actually decide to consult with their rich hoops resources at hand before rejecting trades that the vast majority of their fanbase are more than down for:

For more on O.J. Mayo check out Straight Outta Vancouver.
For more on Hasheem Thabeet check out Ridiculous Upside.
Think some form of the Monta- Mayo swap goes down this summer? Think Nellie will be included in the decision making this time around?
99% of rumors never happen, but 99% of them are fun to talk about!