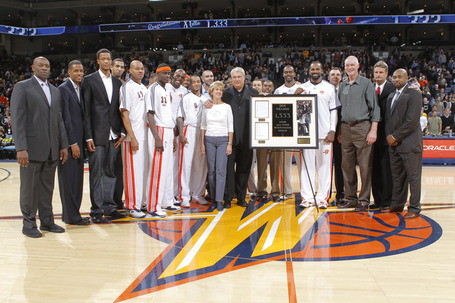 (Down 17 in the first quarter, this was the most smiling by the team and Warriors fans for the first 12 minutes)

Like almost every Warrior game of late, our undersized team found themselves overpowered by a taller, longer, and arguably stronger (willed) Oklahoma City Thunder squad.  The Thunder, raining threes and reeling off ESPN top-ten-highlight-worthy alley-oop dunks, raced out to a 17 point lead at the end of the first.  At one point, the Thunder had 22 points to the Warriors 7.  Not exactly the best way to start a game after honoring Don Nelson with a plaque with his new NBA wins record.

But, in typical Warriors fashion, they found a way to battle back in the second quarter with Stephen Curry at the helm making play-after-play to get within single digits by the second half.  Perhaps this has become the Warriors secret recipe for success.  Let your opponent race out to a huge lead and once they've let their guard down, attack them as quickly as possible?  Whatever it is, this underdog motif that defines our Warriors makes for this equally great narrative of "the comeback" with this rag-tag squad of players that coaches and critics have either doubted as athletic enough to play in the league (Stephen Curry) or cast-offs whose sole purpose is to fill a seat on the bench while the contract player gets healthy.  It could be a great Disney movie, really.  Imagine "Coach Carter" meets "League of their Own."

Highlights!  And there were a ton.

The Thunder maybe my new favorite team to watch given how effortlessly Kevin Durant, Jeff Green, and Serge Ibaka could grab rebounds off missed jumpers and dunk over our puny Warriors underneath the basket.  The "oohs" and "aahhs" from fans over this seemingly non-human athleticism was frequent throughout the first quarter when it looked to be a blowout.  With their crazy length (Durantula), athleticism, and their blue jerseys, it was like you were watching the Na'vi from the movie Avatar. 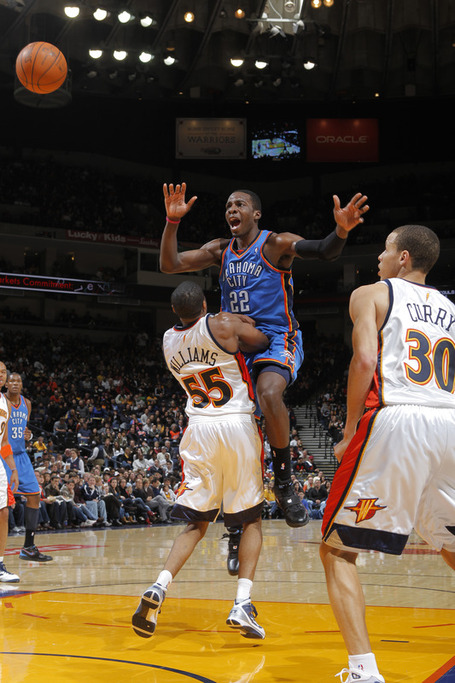 There was one particular sequence where Jeff Green cut backdoor for an alleyoop, which Anthony Tolliver, guarding Green, was again on the wrong side of a highlight reel.  From our seats, you could see how much further up Green got than Tolliver, a good foot and half maybe.  I think Tolliver needs to get some strength shoes over the summer to help his ups so he doesn't become a possible Slam-magazine insert, for the wrong reasons, every game.

But the Warriors weren't without their own highlights as well.

Stephen Curry led the Warriors cut the Thunder lead in half in the matter of minutes in the second quarter with an array of drives.  Most notable to me was his behind-the-back-pass-fake to Reggie Williams in the corner, which froze Nick Collison just enough to keep the lane open for an easy lay-in.  Or who could forget his nifty no-look passes to a cutting Rony Turiaf in the middle of the paint for a point blank shot.  We have come to expect this from Curry on a regular basis. 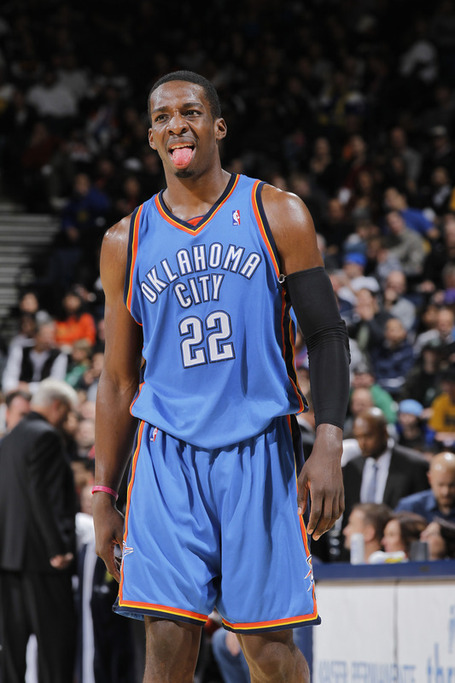 But the most impressive play was Curry's underhand no-look pass to Corey Maggette while face down on the ground, which led to two free-throws.  Curry, having some dribbling problems, had the ball poked out.  With the ball loose, he quickly dove to the ground, recovering the ball briefly just enough to throw it backwards without looking to Maggette, standing behind him.

Monta, back from the Flu which needed extensive blood-work to diagnose the issue, was a bit rusty to begin the game but returned to his usual self, turnovers and fantastic drives and all.  As usual, there were plenty of "GROAN" moments where Monta dribbled it off his leg or was picked cleanly like dried up boogers.  Then there are the moments where Monta splits 4 people driving to the hoop in what looks to be a situation that only Michael Jordan could manufacture points from.  As usual, Monta found his cracks between defenders and managed to get high-percentage shots in what looked to be low-percentage shots.  Monta also hit back-to-back threes to help the Warriors close in deficit to single digits.

The Monta and Curry show looked to be in full effect.  And it was best when they weren't on the floor together at the same time.  In the second quarter, Monta sat out all but two minutes which for some reason helped the Warriors close the gap.  By the end of the first half, Curry had 12 points and 5 assists.  But for a bulk of the third and fourth quarter when the Warriors finally took the lead, Monta began to get hot while Curry sat on the bench until about 3 minutes left in the fourth.  Is playing them separately the only way they can co-exist?  Ironic?  Or was Nellie just giving minutes to whomever was playing well at the moment?  At any rate, perhaps this is another one of Nellie's great coaching strategies...

Turiaf's spike in the second half might have been the greatest play of the game if not one of the greatest plays of the whole season for just how loud, hard, and far the ball sailed.  With Jeff Green driving into the lane in what looked to be another relatively easy lay-in, Turiaf raised it up and met him at the rim, sending the ball back about 15 feet to the foul line, which the Warriors corralled and went racing to the opposite end of the court.  I would have to say that Jeff Green got "Tolliverized" on that play.  To make matters worse for him, Green also fell to the ground after the block.

Reggie Williams continues to do what he does best, which is rifling in open three point shots.  Playing point-forward for a bulk of the time he was in, Williams had one particular amazing pass where he drove in and went up in what looked to be a difficult lay-up.  But instead, Williams dished the ball to Tolliver on the opposite block for an easy wide-open score.  I'm glad we locked Williams up for next year at the ultra low-price.  His 9 rebounds to go with his 20 points continue to show his well-rounded game. 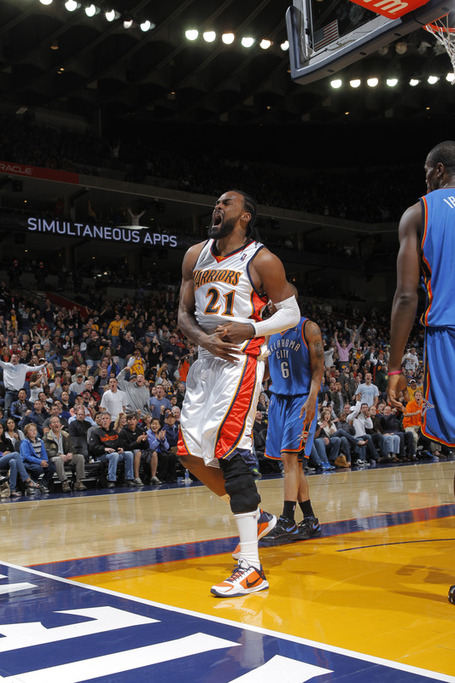 (Almost becoming an all-male revue, Turiaf holds back on his post-dunk celebration by just pulling his jersey out as opposed to taking it all off)

The Asian woman sitting in front of me deserves the Warrior fan of the game award, if there ever was one.  From tip-off to the confetti celebration raining down after Durant's missed three-pointer, this woman was jumping out of her seat, chapping her hands, and chanting "Warriors."  She sat at the edge of her seat for the bulk of the third and fourth quarter with her hands clasped together like she was praying.  Whenever the Warriors hit a three pointer, she leapt from her seat and threw her hands up like she was attempting a three-pointer herself, which she would then yell "THREE!"  I think what struck me the most about this fan was how no one else in her family - husband and two kids - even remotely shared her enthusiasm for the Warriors.  Given that she had a family and all, she definitely didn't fit the image of who I expected to be most into the game in her family.  Plus she practically ate a whole tub of popcorn by herself and a 16 oz soda pop, which definitely added to her impressive-ness.  Warrior fans take note of her fan-dom

As amazing as this win was, and more importantly, entertaining, part of me wonders if this win is what we need.  As the Warriors now sit at 25-55, There slowly creeping further and further out from the promised land of landing one of the first 3 picks.  For those that watched this game, would you have rather see a victory or a VERY VERY VERY entertaining loss? 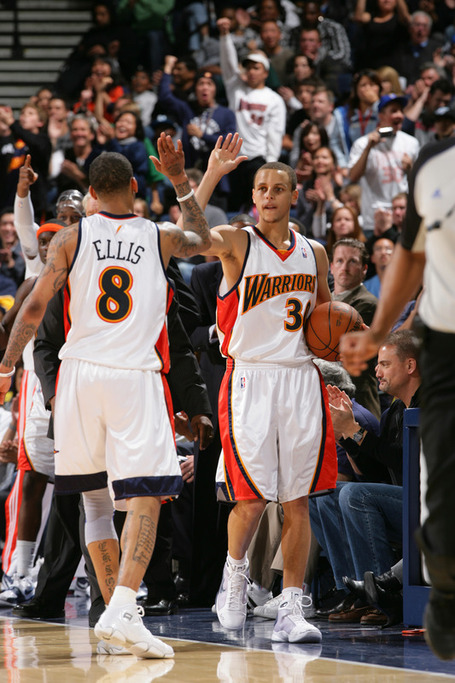 (They're finally celebrating together.  And they look like their matching with their white kicks.  Does this mean they're friends now?) 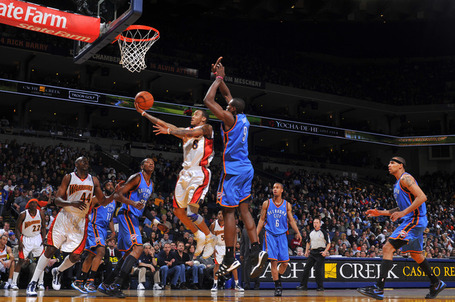 As mentioned earlier, Monta came back and did his usual "how did he do that?" thing, weaving between defenders for lay-ups.  27 points ain't bad when coming back from the flu.