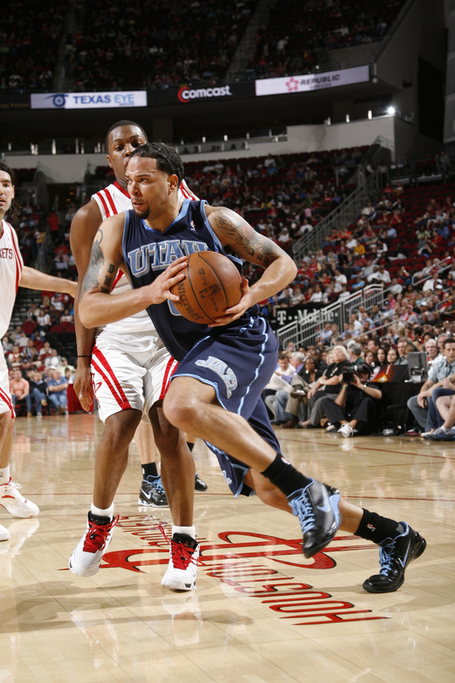 The best point guard in the world?

The Utah Jazz are in town, and they mean business. With two games left, they are tied for Phoenix for the fourth seed and homecourt advantage in the first round. They are also tied with Denver in the loss column for the Northwest Division crown and the third seed, out of the Lakers' bracket. So this game obviously carries huge significance for the Jazz. Which is one reason why the Warriors are +6.5 point dogs in their own house.

Can the Warriors compete with the Jazz in this game? Perhaps more importantly, should they compete?

A lot of Warriors fans have been rooting for the Warriors to lose games to improve their playoff seeding. I think that's fool's gold (except when Tim Duncan is in the draft). In most cases, I believe, teams should continue competing and working to improve, and let the lottery chips fall where they may. And that appears to be the Warriors' mindset. Their victory over the Thunder in the last game, with nothing on the line, showed that if management intends to start tanking, the players haven't got the memo.

Even if the Warriors show up for battle, its an open question whether this game can be competitive. Utah has owned the injury-depleted Warriors in recent years. The Warriors have had no answers for either the inside dominance of Carlos Boozer, or the outside artistry of Deron Williams. And the Jazz are startlingly effective at holding down Monta Ellis and the Warriors' guards. In his last seven games against the Jazz, Monta has averaged 12 points on 40% shooting. In his lone effort against the Jazz this season, it was even worse: 6 points on 2-14 shooting. Clearly the Jazz know something about defending Monta Ellis.

They're not too bad at defending Stephen Curry either: he's turned the ball over 14 times in his two meetings with the Jazz. For the Warriors to compete in this game -- before they even consider their battle in the paint with Boozer and Millsap -- Curry and Monta need to solve the Jazz defense.

Here are the signs that will indicate early whether the Warriors intend to bring their A-game tonight: 1) Turiaf plays, for absolutely no reason, on the knee that will require surgery after the season; 2) Don Nelson, not Keith Smart, coaches; 3) Maggette takes the challenge against Boozer and Milsap; and 4) Monta takes the challenge against Williams.