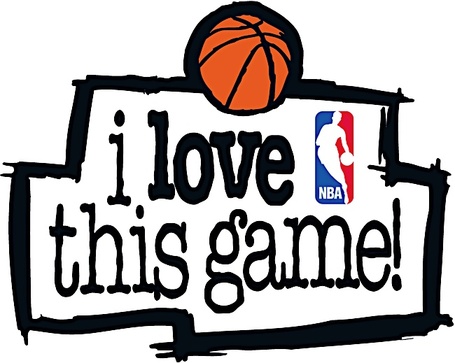 I'm honestly sad to see this season end. These guys played some inspiring basketball down the stretch.

Without a doubt it has been a very difficult Golden State Warriors season for all, but you know I wish it didn't end tonight. The past month and half these guys have really showed me something. Instead of just packing it in and idly counting NBA Lottery Balls these guys showed some fight and passion. From Stephen Curry's eye-popping post-All-Star break rise to amazing heights, to Don Nelson's record for most wins as an NBA head coach, to everyone on this roster including the D-League call-ups and Devean George playing like it's 2002- I can dig it and I'm sad to see it end. These guys got HEART.

I've watched a lot of NBA basketball over years, but I've never and probably will never again see something like what happened tonight.

Devean George fouled out of the game with less than half of the 4th quarter left leaving the Warriors with 4 healthy bodies. That would mean George stays in the game and every additional foul he commits results in an extra tech. Right?

Here's the catch. The Warriors had 3 dressed guys- Chris Hunter (though he was injured in the game and Nellie told the refs he wouldn't be returning), Ronny Turiaf, and Anthony Morrow sitting on their bench. Even though both Turiaf and Morrow were deemed injured and unable to play during the pre-game warmups, the referees stuck to their interpretation of the rule and forced Nellie to play his injured guys.

Nellie wasn't the least bit happy as he got into it (understatement of the season) on the sidelines with the refs for several minutes. Finally the arguing stopped and Nellie- well, Nellie was just Nellie. First he put in Hunter and then after a few plays of watching Hunter in pain Nellie pulled him out saying he was too injured to play. He then did the injury version of Hack-a-Shaq and trotted out Turiaf and Morrow for a combined total of 16 seconds just to appease the refs and then pulled them out as they were (drumroll please)... too injured to play.

The Portland crowd was booing like crazy while Nellie was (rightfully) screaming at the refs and even booed the injured Hunter, Turiaf, and Morrow as they headed into the tunnel towards the Warriors locker room injured. I'll forgive them though as they probably had no idea what was going on.

Props to Nellie for sticking up for his guys though.

Refs- you've got to kidding me. You do not force injured players to come onto the court under any circumstance. All it takes is one screen, one cut, one trip, for a player to be seriously, seriously injured. In case you haven't noticed these players are big and strong. Big and strong falls down hard. It was just a negligent and dangerous move on the part of the refs.

I'd like to split the final Warrior Wonder of the 2009-2010 Golden State Warriors and hand it out to two extremely deserving candidates. Hopefully the 2009-2010 Rookie of the Year voters do a split between Stephen Curry and Tyreke Evans as well.
Anyhow I'd like to give 1/2 of tonight's award to the NBA D-League. The NBADL is real folks. Props to the Warriors for knowing how to take advantage of it- particularly Nellie and Larry Riley.
Also I'd like to show some love and give the other half of tonight's award to our brother blog Ridiculous Upside. All season long they've armed us with NBADL insights about all 5 players the Warriors called up this season. Don't forget to thank my man Scott for the Reggie Williams tip as well. 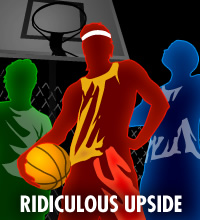 In closing I just wanted to say thank you, thank you, thank you.
Believe it or not but we're closing in on 5 years on this project dating back to our Golden State Warriors BLOG days. It's been a pleasure. I remain impressed with my co-writers' work on this site and I'm forever in awe of how fabulous this community has grown. Thank you for making this place undeniably... 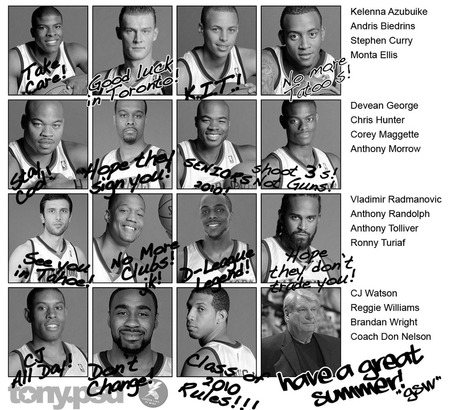 Keep it locked on GSoM all offseason long for our annual coverage of the NBA Playoffs, the NBA Draft Lottery, the NBA Draft, the summer leagues, and free agency/ trades!