TV: CSN, with the low-def feed.

(it's a truly first rate site! worth the read even if you are indifferent to all things Portland.) 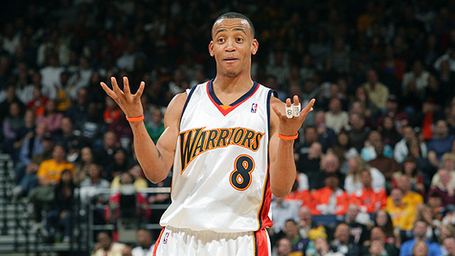 Monta Ellis ponders the question "will I be back next season?"

It’s been a long season, but it ends today.

Was it really just three years ago when our Warriors played a meaningful game in Portland where the outcome would determine whether or not they’d make the playoffs? Yes, there’s a season’s worth of excuses. Injuries, injuries, injuries, injuries, a less than optimal mix of players, and some more injuries. But excuses or not, it’s just been a terrible, terrible season.

Bring on the Summer League!

In the mean time, the game is not without significance. Portland is knotted with San Antonio for the 6th seed. With the tiebreaker secured versus OKC, Portland does not need a win to avoid the Lakers in round one. It is a matter of preference whether they’d like to face the Jazz or Dallas in the first round, so don’t expect the Blazers to come out gunning. There’s not enough on the line for them.

But for the Warriors, victory would mean at "best" the 5th worst record in the association, have "caught" the Kings with our meaningless victory over the Thunder. A loss would ensure a tie with the Kings and Wizards for 3rd worst record with equal chances in the lottery and coin tosses to determine the picking order should either or all fail to pull a top-three slot.

Is there another story line? (follow the jump to find out).

Williams and Tolliver, playing for spots on the team next year, do not realize that their better than expected performances look to bring us worse than expected odds in the lottery. One can only hope that their quests for personal glory subverts a winning cause in the same way that the ball-hoggedly antics of other shot hungry Warriors-to-remain-nameless has done for much of the season.

One can only hope that Nellie is on the plane for Maui already in spirit if not in body. His coaching this year has left much to be desired. For point of reference, neither Montgomery nor Musselman managed to lose as many games in a season as Nelson has in each of the last two. However, as bad as it seems Nellie has been this year, the short lived Keith Smart era was even worse. If ever we needed a loss, it’s time for Keith to take the reins and drive ‘em right off a cliff. Settle for nothing short of a double-digit deficit at the half. I don’t want to sweat this one out!

But I want to watch. This could be the going away party for Monta (the other potential departees seem to be in Abdenour’s care already). It’s a shame that his success could be costly for the Warriors.

Tanks for the memories!