2009-2010 NBA Rookie of the Year: The case for Stephen Curry vs Brandon Jennings + Tyreke Evans

Share All sharing options for: 2009-2010 NBA Rookie of the Year: The case for Stephen Curry vs Brandon Jennings + Tyreke Evans 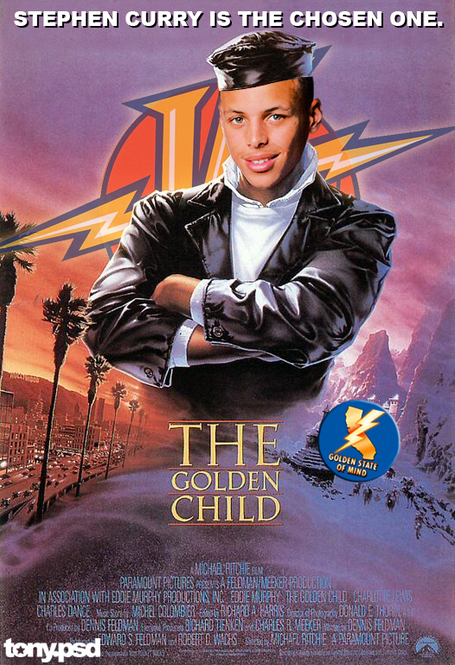 It's all over but the counting, and the statisticians, spindoctors and hypesters are crawling out of the woodwork to have their say over who deserves this year's NBA Rookie of the Year award. So why should I be any different? Here's my analysis of the three leading candidates for Rookie of the Year, and my reasons why Stephen Curry stands alone as the correct choice. 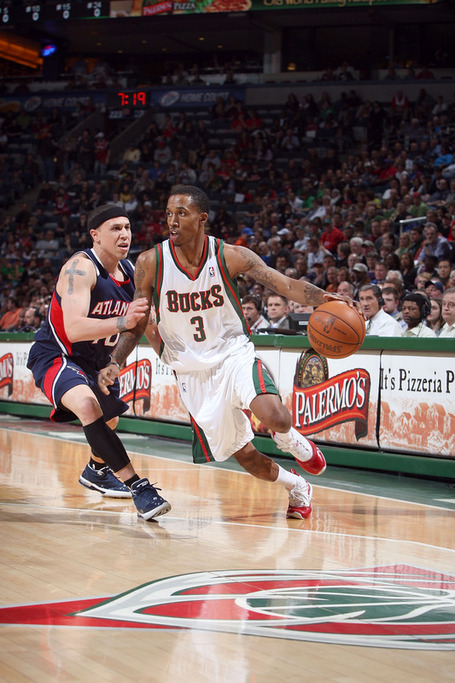 1) The Bucks are going to the playoffs.

2) Is there another reason? If so, I haven't heard it.

1) It's not at all clear that Jennings is even a good player: Since getting off to the hot start that ignited a firestorm of attention -- including a 55 point game against a decimated and demoralized Warriors squad (Azubuike blew out his knee in that game; Jackson was destroying team chemistry; Curry came off the bench) -- Jennings has struggled badly. He is shooting an anemic 36% from the field since the all-star break. His scoring average has declined from 17 ppg pre all-star game, to a mere 13 ppg post all-star game. And as his production has declined, so have his minutes under Scott Skiles. As the season draws to a close, Jennings finds himself in a virtual platoon with Luke Ridnour. Jennings is getting 30 mpg, Ridnour 20. In fact, in 4 of the last 12 games, Skiles has played Jennings fewer than 20 minutes.

It is not even clear at this point that Jennings has what it takes to remain a starting point guard in the NBA. He will need to improve his shooting considerably in order to keep his job. And it's far from a given that that will ever happen. Consider the case of Ramon Sessions, the point guard that Skiles dumped last summer.

2) Bogut, Salmons, Mbah a Moute, Ilyasova, Ridnour, Skiles. The Eastern Conference. In other words, all the other reasons that the Bucks are going to the playoffs. Did Jennings really lead the Bucks into the playoffs, or did they drag him? 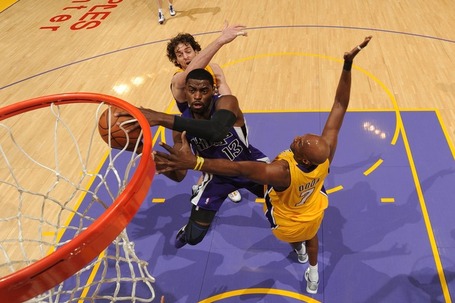 1) The Stats: Joins Oscar Robertson, Michael Jordan and Lebron James as the only players to have averaged at least 20 points, 5 rebounds, and 5 assists in their rookie seasons.

2) Is there another reason? If so, I haven't heard it.

1) He's not a point guard. Here's John Hollinger, who recently included Evans on his list of most selfish "Chuckers" in the NBA:

Evans plays point guard much of the time and thus has a decent assist ratio, but that masks his major weakness as a playmaker: He thinks sequentially. As in, "First, I'll look for my shot; only when I am cut off, I'll look to see what's going on around me." As a result he might be one of the most frustrating teammates in the league.

He's one of a handful of players with a TS% under 53 and a usage rate above 25, but the visual is what really puts him over the top -- the idea of involving people just for the sake of their participation in the offense seems completely foreign to him. Too many times he's passing only as a last resort.

If that analysis, or even the experience of watching Evans ball-hog yourself, has not convinced you that Evans is not a point guard, then consider this: Evans could not co-exist in the same backcourt with one of the premier offensive off-guards in the league, Kevin Martin. Their lack of chemistry forced the trade of Martin to the Rockets at mid-season. Who replaced Martin in the backcourt alongside Tyreke Evans? Point guard Beno Udrih.

In other words, the Kings themselves don't think Tyreke Evans is a point guard.

2) Evans can't shoot from outside, and is a very poor defender. These are qualities that are sometimes overlooked in a point guard.

But are they qualities you want in your shooting guard? Evans is still a long way from being a winning basketball player.

3) Now reconsider Evans' 20-5-5 stats. Still very impressive, of course, but far less impressive as an off guard than as a point guard.

Consider this: a few seasons ago, Stephen Jackson averaged 20.7 - 5.1 - 6.5 for the Warriors, and received no recognition at all from the NBA's coaches or the national press. No all-star consideration, no laudatory articles. Not one peep.

4) Evans doesn't make his team or his teammates better. Led by Evans, the Kings have had an absolutely disastrous season. Why? Apart from the early injury to Martin, and a late injury to Spencer Hawes the Kings have enjoyed a remarkably healthy season. But rather than show improvement, they have fallen apart in the second half of the season. Even the subtraction of Martin and the addition of the heralded Carl Landry did nothing to improve them. Why?

Players whom Tyreke Evans has failed to improve: Kevin Martin, obviously. But also his big men, Spencer Hawes, Jason Thompson, and Andres Nocioni. Both Hawes and Nocioni are seriously disgruntled over their role in the Kings' offense. Why?

5) How did Tyreke Evans achieve his remarkable stats? If you want to know why Evans failed to make his teammates and his team better, this is where you should start. I'll let Tyreke Evans himself do the talking:

Evans didn't say so specifically, but there can be no doubt that his agents keep calling to make sure he does the math.

Here's more, from the same article, to provide context:

As the losing persists, some of the Kings have become resigned to an offensive scheme that often results in excessive dribbling and a complete absence of ball and body movement. Both primary ballhandlers - Evans and Beno Udrih - are major offenders, though hardly the only culprits. Overdribbling spreads like a bad cold.

"Coach (Paul Westphal) tells us all the time, 'just because Tyreke has the ball and we isolate him on the wing, that doesn't mean we can't run splits, doesn't mean you can't cut,' " said reserve forward Sean May. "It's been happening all year. But at some point we have to say, 'Tyreke, you gotta go,' or call for a screen and roll quicker if you don't see something. There's got to be more movement to our offense."

And here's more still, a description of the game in which Evans secured his statistical milestone. If you have trouble interpreting any of this, I'll help you out: Tyreke Evans' stat-hunting Rookie of the Year campaign has killed the Kings' offensive chemistry. He is playing the game for all the wrong reasons.

Is this something that deserves to be rewarded? 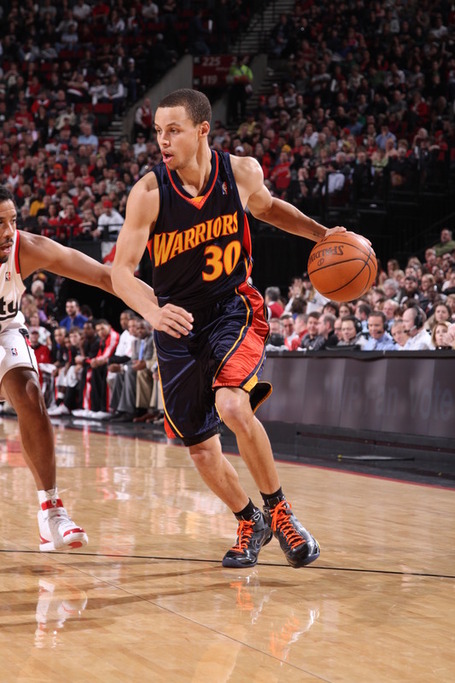 1) The Stats: Curry hasn't averaged 20-5-5 over the entire season. His averages are 17.2 - 5.9 - 4.4. But Curry didn't have an established role with the Warriors at the beginning of the season. He had to deal with the Stephen Jackson turmoil, and something even more difficult: being frozen out of the offense by Monta Ellis, who deeply resented his presence. Curry did not become a full time player, nor begin to take the reins of the Warriors offense until the month of January. These are his averages in his 48 starts after January 1st: 20.6 - 6.7 - 4.8. These are his averages in his first 7 games in April, in which Monta Ellis missed 5 games, and the Warriors' record was 4-3: 24.1 - 8.1 - 6. (This does not include the arguably meaningless last game of the season, in which Curry dropped 42 points, 9 rebounds, and 8 assists in a win in Portland.)

He achieved these averages as a point guard. A REAL point guard. Playing the game the RIGHT way. Stephen Curry, according to his coach Don Nelson, "plays the game for all the right reasons."

2) More stats: Curry has broken the record for three-pointers made by a rookie, while shooting 43% from three. He is 8th in the entire NBA in three-point shooting. His overall shooting percentages are 46-43-88, making him a great bet to eventually join the elite club of 50-40-90 shooters headlined by Larry Bird, Reggie Miller and Steve Nash. Just as a reference, compare Curry's shooting percentages in his rookie year to those of Steve Nash in his first three seasons.

On the defensive side of the ledger, Curry is 3rd in the entire NBA in steals.

3) Stephen Curry makes his team and his teammates better: The Warriors have had a woeful season, but this has had nothing to do with Stephen Curry. It has had to do with the loss, for the season, of the Warriors entire frontline, and both of their starting wing players. Biedrins, Randolph, Wright, Moore and Radmanovich all suffered season ending injuries. Turiaf missed major time, and was seriously limited even when playing. Azubuike was lost to injury early, and Jackson forced himself off the team.

As has been well chronicled, the Warriors have played ridiculously short-handed all season long. This team was held together by midseason D-League call-ups, that brought the number of players available to play each night up to a ridiculously low six, seven or eight. In the midst of all of these injury woes, Curry was the iron-man, playing in all but 2 games. He has been a major part of the glue that has kept this decimated Warriors squad together, and playing hard all season long.

As Curry has assumed the mantle of leadership with the Warriors, the team has gotten better. Consider the recent stretch of games the Warriors played without Monta Ellis, which secured Don Nelson the record for most lifetime coaching wins: the Warriors record in that stretch was 4-3, with three D-leaguers getting substantial minutes.

And what of Curry's work with the D-leaguers? The on-court chemistry he has achieved with Chris Hunter and Anthony Tolliver, in a matter of weeks, is nothing short of remarkable. Could Tyreke Evans, who failed in an entire season to attain any chemistry with his established high-draft-pick big men, have led the Warriors D-leaguers the way Curry has?

Stephen Curry is loved by his teammates. Don Nelson recently referred to the extraordinary chemistry in the Warriors' locker room, calling the Warriors' young core of players "Curry's guys."

By playing the game the RIGHT way, and for the RIGHT reasons.

4) The greatness quotient: Real greatness is foreshadowed in Curry's rookie stats. And not just in his stats, but in the opinion of his head coach, and many other coaches and commentators around the league, who consider him on a par with Steve Nash in terms of basketball IQ.

Brandon Jennings has me wondering if he really is a legitimate NBA starter. Tyreke Evans has me wondering whether he can ever be the kind of player who makes his teammates better, who leads his team into the playoffs, who becomes worthy of an all-star selection.

I don't wonder about those things with Stephen Curry. I have no doubt that he will lead his team into the playoffs many times, and earn many all-star selections.

What Stephen Curry has me wondering is whether I'm watching a future NBA Hall of Famer.

Stephen Curry is the right choice, and the only choice, for the NBA Rookie of the Year.