Share All sharing options for: 2010 NBA Playoff Preview: 1st Round Predictions and Bets 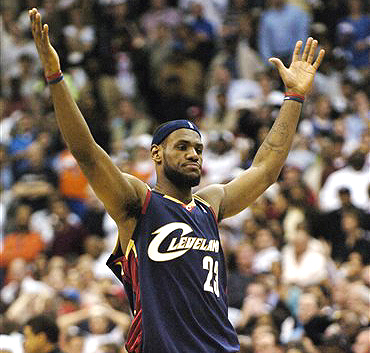 This is a very odd year in the NBA. I cannot recall a season where so many important players were fighting through injury coming into the playoffs: Kobe, Bynum, KMart, Parker, Hill, Marion, Kirilenko, Okur, Shaq, Garnett, Pierce, Jackson, Noah. Needless to say, it makes it extremely difficult to evaluate even otherwise mundane series. But here we go....

Would you like a 3.3% return on your money in a one-week investment? Put everything in your savings on the Cavaliers to win this series. (That's a joke, haters!) But a word to the wise: Do NOT bet against Lebron in any playoff series this year. David Stern badly wants Lebron to win this year, and betting against what David Stern wants is like setting a blowtorch to your money. Just ask Mark Cuban and Bill Simmons. No Bet. 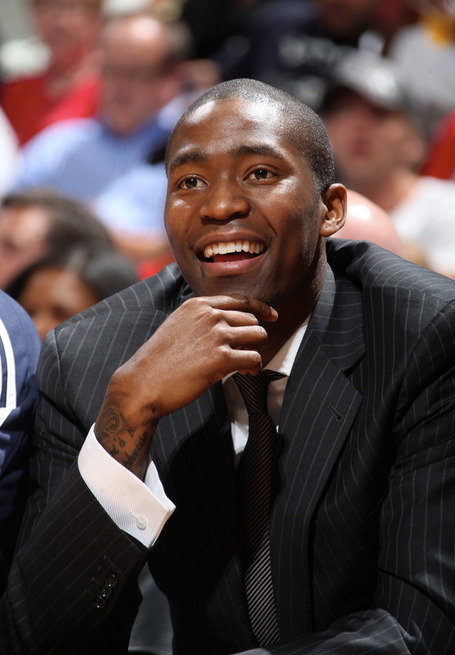 Who's got a Sixth Man of the Year clause in their contract? I do!

Won't be very interesting with Bogut out. Except for this: I'm really looking forward to watching the Jennings/Crawford matchup. Ole! No Bet. 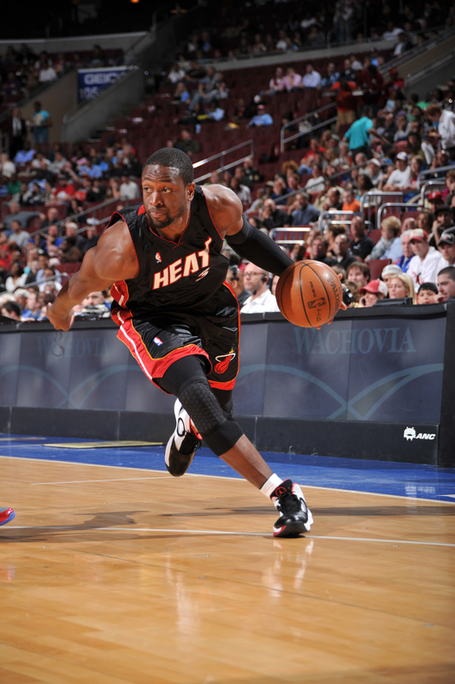 Someone stop this man!

Can you believe the price of this series? Obviously, it reflects the poor health of the Celtics, Garnett and Pierce in particular. It also reflects their poor play down the stretch: the Celtics were 3-7 straight up (SU) and against the spread (ATS) down the stretch. Miami, on the other hand, is red hot: they finished 12-1 SU, 8-4-1 ATS. But still...

The Celtics swept the Heat 3-0 (2-1 ATS) in the regular season. Its really hard to imagine the Heat getting anything at all inside against Perkins, Garnett and Wallace. Can Dwyane Wade once again do everything by himself? Rajon Rondo might have something to say about that.

OK, I talked myself into it. I just bet the gimpy, run-down, collapsing Celtics to win this series at -180. Does this mean I have to root for them?

Update: Uh oh, the great Bill Simmons just picked THE HEAT in the first round against his Celtics! Not good. Can I have my money back? 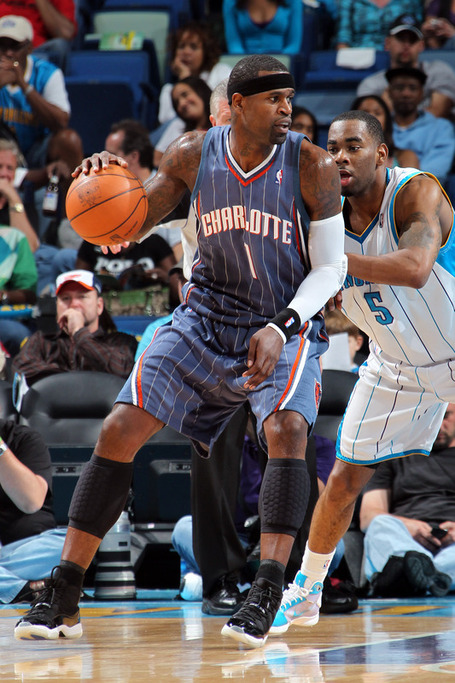 Back in action, Jackson.

These two teams are a lot closer than this series line suggests. Orlando is 3-1 against Charlotte this year. But the first Orlando win came before the Jackson trade, and the second came the day after the Jackson trade. The final two games went like this: Orlando won in overtime in Charlotte, with Chandler out. And Charlotte, after picking up Theo Ratliff at the trading deadline, beat the pants off Orlando in Orlando.

And then there's Stephen Jackson against Vince Carter. Ooh baby, I can't wait to watch this. Jackson haters, open your eyes and watch the man in action on the big stage. There are few better.

With this caveat: Jackson finished the season incredibly beat up, including a extremely painful sprained finger ligament that hampered his shooting. If Jackson can't shoot, the offensively challenged Bobcats will be in real trouble. Their shooting woes got worse in the trade that brought Thomas: they gave up their sixth man, Flip Murray. Now their sixth man is DJ Augustin, who's had a terrible season. He will need to show up.

Can the Bobcats win? I might bet $50 at 7-1 for fun. But I will be looking to bet serious amounts on ridiculous game lines. Like that 8 point opening spread. 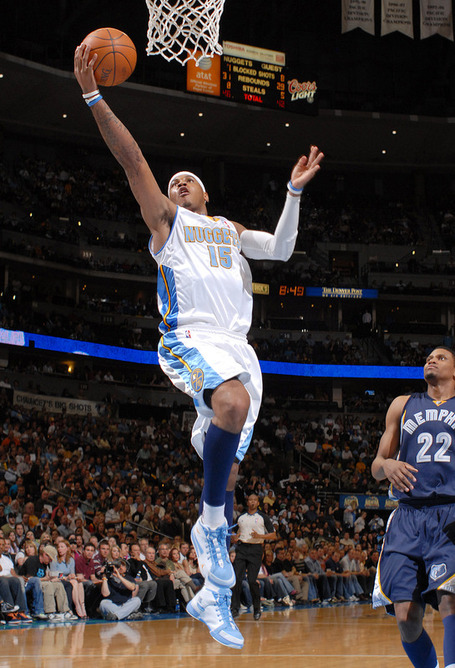 This is a somewhat intriguing series to me. Denver pwned Utah during the regular season, at 3-1 SU and 2-0-2 ATS. Nene and KMart were very effective at holding off Boozer, and allowing Denver's speed and shooting advantages to take control.

But can Denver hold off Boozer without KMart? I think KMart will play, but how good can he be on a gimpy leg after such a layoff? On the other hand, Boozer has his own injury issues (oblique), as do Okur and Kirilenko.

Wildcards: 1) Ty Lawson: Utah struggles against speed, and Lawson torched them this season. Can the rookie step up in the playoffs? 2) Wes Mathews: The Jazz have an impressive rookie of their own. Sloan will try him as a defender on Carmelo.

Injuries throw some doubt on the outcome. But by default, I think you have to take the team with the superstar, and the track record. That be Carmelo, and the Denver Nuggets. No Bet. 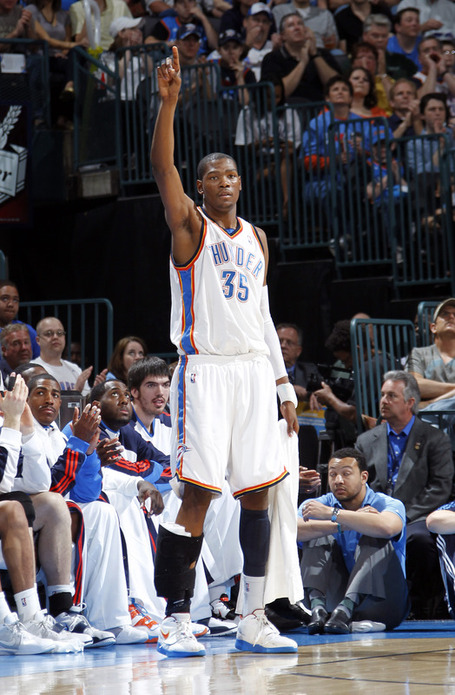 Not yet you're not.

This will be a fun series to watch, for a couple of reasons, but not because the outcome is in doubt. The Lakers are just way too dominant on the front line to lose this series. And then there's that Kobe feller.

OKC needs to get out and run. Their biggest advantage on the floor is Westbrook on Fisher. Westbrook has the opportunity to make his name, to become a star, going against the decrepit Fisher. Can he do it?

The problem with OKC is that they can run but they can't gun. Westbrook, Sefolosha and Harden are all suspect from outside, which will allow the Lakers to focus their defense on Durant.

Something fun: Durant in the playoffs! Artest on Durant going to be fascinating. Is Phil Jackson clever enough to guard Durant with Kobe, like Don Nelson would? No, Phil Jackson is not that clever. On the other hand, he doesn't have to be.

Something not so fun: Watching Kobe freeze Pau Gasol out in crunch time. No Bet. 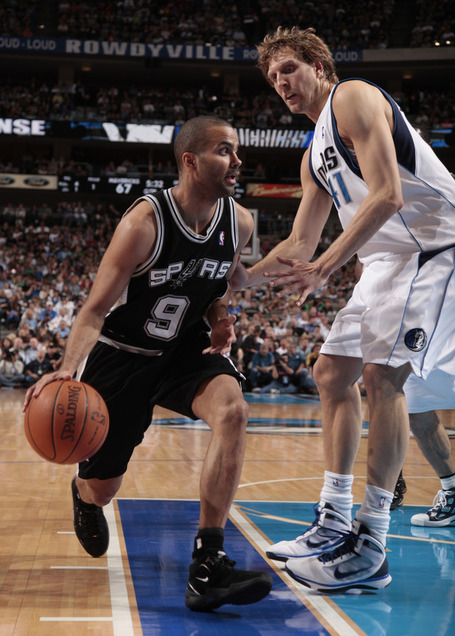 It's on in Texas.

This is an incredibly difficult series to forecast, particularly because Dallas only became a contender at mid-season, with the blockbuster trade that brought them Butler, Haywood and Stevenson. Then throw in the fact that the Spurs are throwing Tony Parker into the fire after a huge layoff, and George Hill is playing on a bad ankle; and for the Mavericks, Marion is coming back from a layoff and I don't believe he's fully healthy.

Both teams can play as big as you like, but should they? Both Popovich and Carlisle are matchup wizards, and I could easily see both of them racing to get small, since neither team has an edge in the middle. Can Eric Dampier outplay Antonio McDyess or DeJuan Blair? Can Haywood?

Duncan, Jefferson, Ginobili, Hill, Parker v. Nowitzki, Marion, Butler, Terry, Kidd. Which small ball unit do you like? Exactly. It's going to be fun. No Bet. 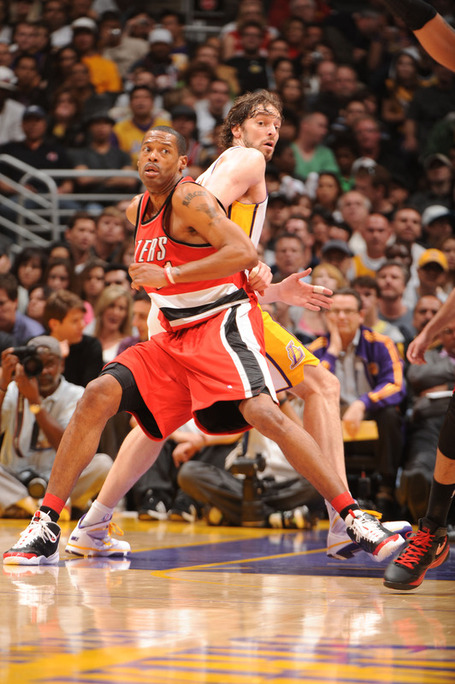 I won't be betting this series, but I seriously wonder if Portland can't shock the world against Phoenix. This line reflects the loss of Roy, a hugely important player, no doubt. But Portland already has played without him this season, and played well. They have some incredibly talented wing players in Webster and Batum to step into the breach. Will JRich be able to get anything done against Batum?

But the real reason I think Portland is being taken lightly is Marcus Camby, who was a late-season addition to their team. Camby is one of the great playoff centers in the league, and he has been playing like a monster as of late. I think he could give Stoudemire fits.

At the point, Nash is great, of course, but he will have plenty of problems trying to guard Andre Miller. Remember Miller taking Curry and Morrow to the rack like a rodeo bull? It's gonna be just like that.

And then there's that Rose Garden. Hmmm. No Bet on the series, but I will be watching the game lines of this series closely for opportunities.