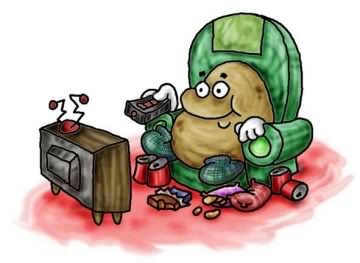 The NBA playoffs is the best time of the year to test your couch potato skills, especially on opening weekend where the schedule is filled with wall to wall basketball: 4 games on Saturday, 4 more games on Sunday. How many games did you catch? Be sure to answer in the poll.

The opening weekend kicked off the post season with a bang, as the Cavs crowd tormented Joakim Noah, while Kevin Garnett introduced his elbow to a Heat player, and got a 1 game suspension. Injuries also took their tolls as Brandon Jennings tried to do it all without Andrew Bogut while Stephen Jackson gutted through a hyper extended left knee (MRI results later showed a bone bruise) suffered at the end of the 1st half. The Jazz were bitten by the injury bug twice as CJ Miles got the wind knocked out of him (though he later returned) and Mehmet Okur tore his Achilles tendon, ending his season.

Tonight's TNT double header features Game 2 of the Bulls @ Cavaliers, 5:00pm, and Game 2 of the Jazz @ Nuggets, 7:30pm. Come on in and drop a few comments. Where else do you think I get my writing material from??? 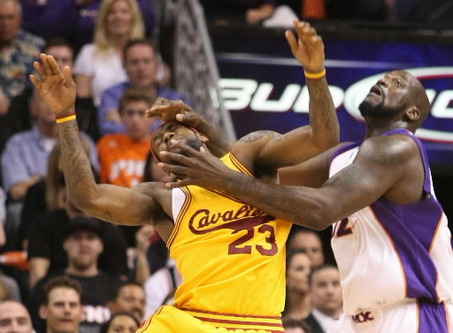 Lebron and Shaq have a new pregame ritual.

On paper, the Bulls, who snuck into the playoffs with the help of a Bosh-less Raptors losing streak, had no reason to be in any conversation against the fully loaded Cavaliers. On the court, the Bulls showed that they had no reason to be in any game against the Cavs. So why watch this series? Because on the mic, Joakim Noah showed that he can take any spotlight away from the Cavs.

Before the series started, Noah had this to say about the series.

This, of course, irked the Cavs fans, causing them to rain down boos on Noah during Game 1. So in tonight's game, the fans should be just as mean to Noah, right? Nope. They'll be meaner.

"I don't know about Cleveland, man," Noah said following Bulls' practice on Sunday. "There is nothing going on. It's bad, man." When asked if his dislike for the town would motivate him more in the series, Noah said: "What, that Cleveland sucks?"

That's right, Noah stole the mic once again. So expect a lot more fireworks from the fans tonight.

This guy will single handedly beat the Cavs in number of post game quotes.

Oh by the way, Noah. Your Bulls aren't the We Believe Warriors. I'd get more shock out of folding my laundry.

Nobody knows more about injuries than us Golden State Warriors. We have had to dip into the D League 5 times and signed 3 of them to season long contracts. And even still, we ended our season in Portland with only 5 healthy players.

So we know what the pain feels like when a player goes down with injury, especially during a game. On Saturday, Mehmet Okur tore his left Achilles tendon while driving towards the hoop and is now out for the rest of the playoffs and likely any summer basketball as well. 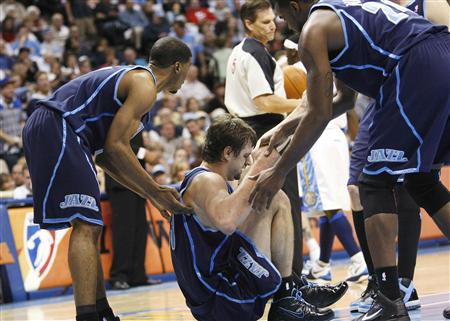 I tuned in to watch the players make plays, not to help them off the floor. Injuries suck.

The injury forces Jerry Sloan to reach into his bench and pull out seldom used Kyrylo Fesenko to replace Okur. Add in the absence of Andrei Kirilenko, who was supposed to match up against Carmelo Anthony, and the Jazz don't have much of a shot at lasting with the Denver Nuggets for tonight's game. That doesn't mean the Jazz will simply lay down. Like our D League team, the Jazz will fight to the bitter end. They just won't have the resources to counter the Nuggets.