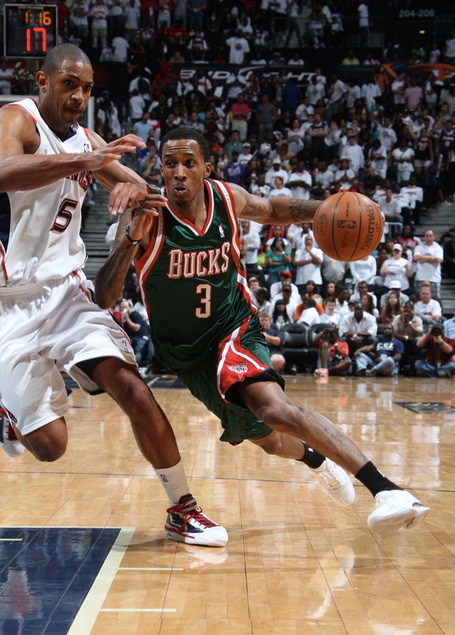 Jennings vs. The Hawks! Wade vs. The Celtics! Durant vs. The Lakers! Stoudemire vs. Camby!

The ritual slaughter of the Bucks continues. Brandon Jennings went for 34 points in the first game, starting the hype machine on spin cycle again. Forgive me if I'm not impressed. For one thing, the Hawks do not have a defensive guard to play on him. They settled for guarding him with Joe Johnson, which should create a tremendous mismatch in Jennings' favor. And second, Jennings was shut down in crunch time (1-5 shooting, 1 assist), when the Hawks got serious about defending him. The bulk of Jennings scoring came in the second and third quarters, when the indifferent Hawks were cruising and showboating with a 20 point lead. And then there's his generalship: 3 assists against 3 turnovers. Jennings simply couldn't find a way to get his teammates involved. Do you think having Andrew Bogut did anything to make him look good this year? 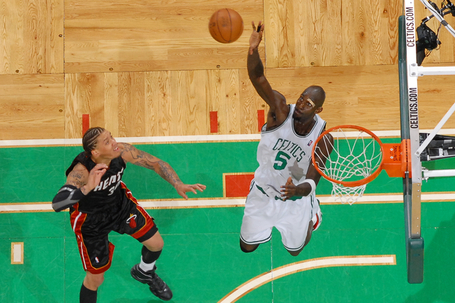 You won't be seeing this.

Game 1 played out mostly as scripted. Dwayne Wade played one on five, and Boston's interior shut down Miami's bigs. Boston looked old and tired, but somehow got the ball through the hoop in the fourth quarter.

There were a few surprises. Tony Allen, playing through flu, was a revelation going against Wade. And then, of course, there was that little suspension thing involving Kevin Garnett. Rasheed Wallace got all of 13 minutes in the opener. This is his chance to shine. Does he have any more big games in him?

Celtics -1. Hmmm. I suppose if I'm picking the Celtics in this series I should take them in this game. But since I already have a series bet, I'll leave this one to others. 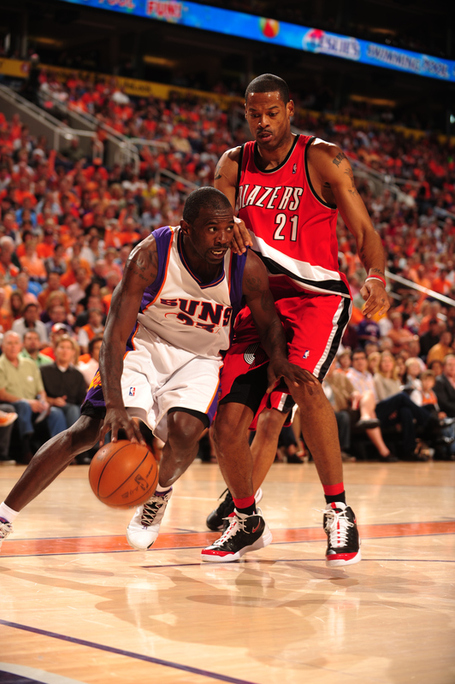 Allow me a little back pat in an otherwise tough season: Anyone else nail this series besides feltbot? Marcus Camby dominates Amare Stoudemire? Check. J-Rich shut down by Portland's rangy wings? Check. Andre Miller unstoppable? Check.
Phoenix is in real trouble in this series. They appear to have no answer for Miller. They did not even try to guard him with Nash, assigning J-Rich to him instead. It didn't make a difference. It's one of the eternal mysteries of basketball that a 6-6" player of the athletic abilities of J-Rich could be such an eternally horrible defender. But there it is.
Portland, on the other hand, has an answer for Amare Stoudemire. Mr. Marcus Camby, one of the great playoff centers in the league. Camby held the Man-Child to 8-19 shooting while picking up 17 boards and 3 blocks.
What's scary for Phoenix is that Portland didn't even play particularly well in the opening game. Rudy Fernandez, who has been whining in the press all season long about his role, got his chance to shine with Roy out. Phoenix guarded him with Steve Nash, which is an epic insult. And Fernandez managed 5 points on 2-7 shooting going against the worst defender in the league, which is an epic fail. If Nate McMillan benches Fernandez for Martell Webster, and switches Batum onto J-Rich, things could get even tougher for the Suns.
Phoenix -8.5. The 8.5 line in the opening game was a gift to bettors. But Portland doesn't need this game, and Phoenix has its back against the wall. No pick. 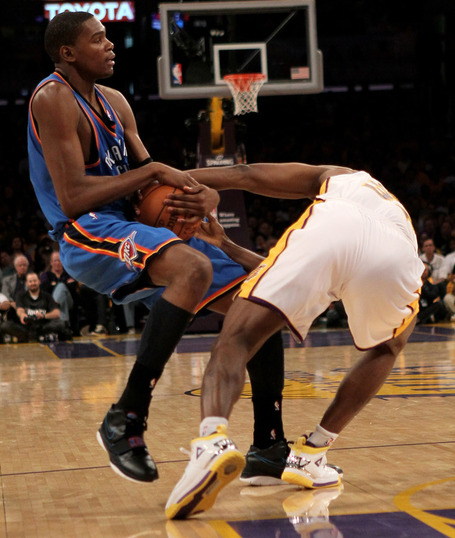 It surprised me that the Lakers couldn't blow out the Thunder in the first game, with the Thunder having such a horrible offensive game plan. It had a lot to do with Kobe Bryant selfishly jacking up a 6-19 on a bad finger. I have the feeling that Kobe would rather lose than let Pau Gasol get credit for carrying the Lakers. Which he is.

Durant was horrible going against Ron Artest in the first game. It was partly his fault, but also partly the fault of his coaching staff. The Thunder need to utilize Durant's speed against Artest. Instead of iso'ing him on the wing, or posting him up, which lets the Lakers' defense get set against him, they need to put Durant in motion, and force Artest to chase him around screens.

And Durant needs to trust his shooters. His shooters can't shoot (I wonder how Stephen Curry would have looked on this squad), but he needs to trust them anyway. Kobe Bryant is playing free safety, not guarding anyone. You can't win a game, let alone a series, if you allow that to happen.