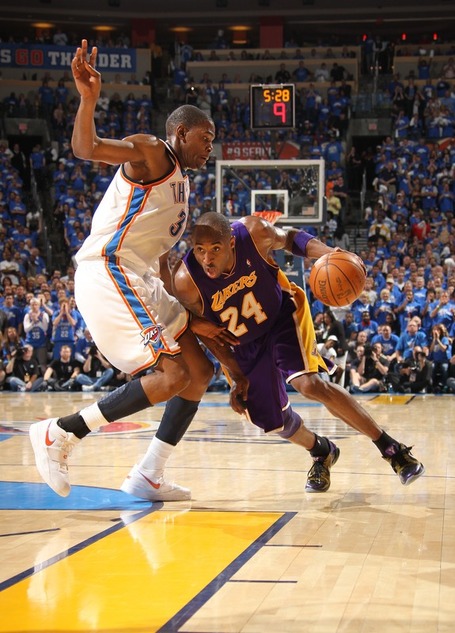 This is it, kid KD. Black Mamba's out for revenge. How do you respond?

TRUTH: Paul Pierce's buzzer beater gives the Boston Celtics a commanding 3-0 series lead against the Miami Heat. Dwyane Wade injured before the last play on a missed jumper, but it turns out to be just a leg cramp.

FUNDAMENTALLY: The San Antonio Spurs grind a 94-90 win over the Dallas Mavericks behind Tony Parker's clutch play and zero three-pointers made.

SALTY: Paul Millsap registers 22-and-19 to give the Utah Jazz a 2-1 series lead over the Denver Nuggets. 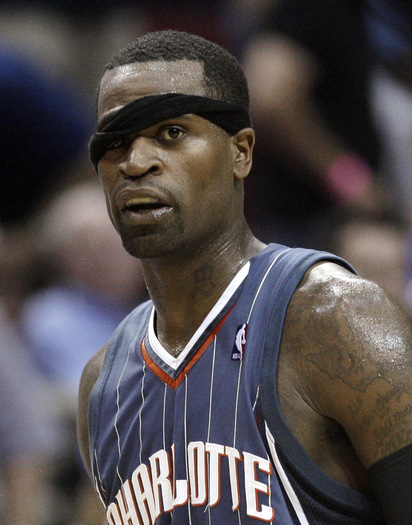 No way that's not called in Charlotte.

Fun fact: Did you know that Dwight Howard is only 6'9" without shoes (scroll to near end of linked article)? Seriously though, is anyone waking up at 11am to watch this? 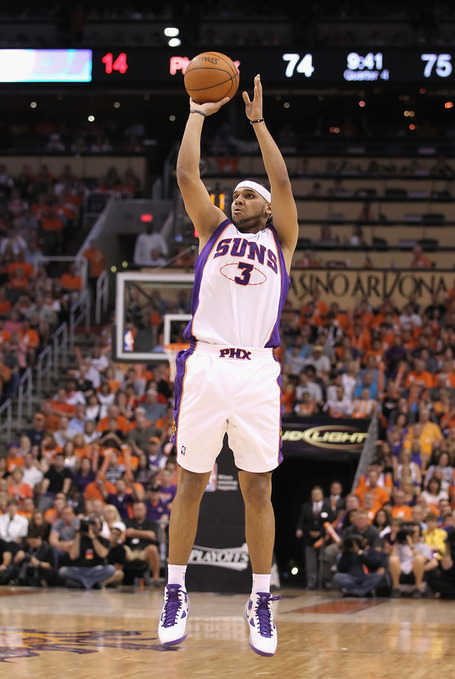 Incidentally, it doesn't seem like 2008 Summer League wonderboy Jerryd Bayless is taking advantage of the opportunity for him as a result of Brandon Roy's injury. Disappointing. I just think he's on the wrong team. 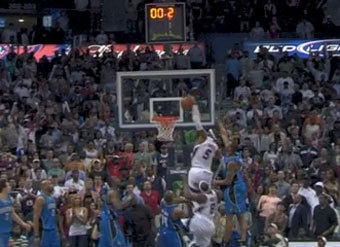 This guy has at least two putback dunk buzzer-beaters, right?

The career progression of Josh Smith is strikingly similar to that of Kenyon Martin. The Hawks need to do the right thing and keep their Big Three together, not like what the New Jersey Nets did with K-Mart. I suppose there is probably an upgrade out there somewhere from Mike Bibby, so the Hawks especially need to keep Smith and Joe Johnson.

This franchise that is on the up-and-up needs to prove a point and sweep the Bucks, who don't have much aside from Brandon Jennings and the injured Andrew Bogut. On a side note, early in the season, the 6'9" Ersan Ilyasova from Turkey was playing well as Jennings carried the team, and now I'm surprised to see that Ilyasova has been inconsistent and is coming off the bench. 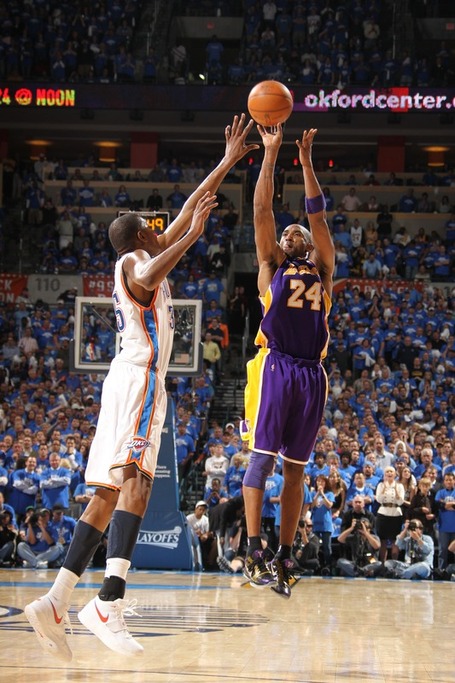 This could be a career-defining game for Kevin Durant. And he's only 21.

So you just stopped Kobe Bryant in a late-game clutch situation. Kobe is now pissed. Believe me, he's taking it personal. He knows that he needs to put a stamp on this series now and not give OKC any hope heading back to LA.

Kevin Durant, do you realize how big this Game 4 is for you?

@MoBrooksESPN (Maurice Brooks of ESPN.com) tweeted after Game 3 that "Kobe had better hope KD doesn't defend him the rest of the series", to which @JonesOnTheNBA (Nate Jones) said it best when he replied that doing so would be like the '91 Finals when Scottie Pippen switched over to guard Magic Johnson.

I hereby submit that OKC coach Scotty Brooks ought to come out in Game 4 and have KD guard Kobe again, from the opening tip. Make a statement.

And I must caution that Kobe going off out of the gate, suggests that the ball won't be pounded into Pau Gasol and Andrew Bynum, as should be the game plan for the Lakers.

Sure, starting off hot on KD could have lingering consequences on KD's late-game confidence on D because, we can all agree, KD must guard Kobe in the 4th quarter, but the kid needs to be put out there to meet his destiny, at some point. The opportunity is here and now. Do it.

Kobe wears down KD? C'mon, the kid's 21. He's supposed to be doing this. It's called "championship-caliber basketball".

Of course, I highly doubt that Brooks would have the guts to play "Chess Master" with Phil Jackson, in this non-hand-check day and age of the NBA (picture Pippen checking Magic all the way down, fullcourt), and in an era where guys don't make moves that jeopardize their jobs.

So, the opportunity will have come and gone for Brooks. Which is why he's not, well, Phil. It's an opportunity to come out and make a statement. To grab the mantle of Alpha Dog.

You take Game 4, now all the pressure's on LA, in LA. Laker fans start to quiver. As a mentor of young NBA players once told me, "an inch of doubt grows to a foot".

But even if that opportunity comes and goes, there could be other variables in play that may allow OKC to steal another one. Take, for example, Russell Westbrook vs Derek Fisher.

Then again, there's Gasol and Bynum down low vs Serge Ibaka and Darren Collison. And Lamar Odom vs no one off the bench. Meh, Lakers in 5.