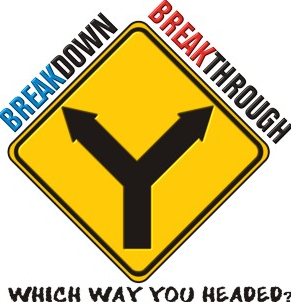 The Bulls, Mavericks, and Nuggets all face this question today.

Unless you're up 3-0 or down 0-3, game 4 represents a fork in the series. If you're down 1-2, a win would bring you back even with your opponent and reduce the series to a "best of 3", while a loss would make the road to victory all that much steeper to climb. Conversely, if you're up 2-1, a win brings victory that much closer to your doorstep, while a loss swings all of the momentum back to your opponent, negating your efforts that gave you the series lead. Today's lineup features a quadruple header of Game 4s, 3 of which are facing this fork.

The Suns didn't look as sharp as they were in Game 3, and with the surprise return of Brandon Roy coming off the bench, the Blazers held off the Suns with a 4th qtr run to even the series at 2-2.

The Bucks/Hawks game was pretty much a yawnfest as the Hawks didn't show up, sparking criticism from the commentators about how bad the Hawks are on the road over the past few postseasons. The Hawks lead the series 2-1.

The Thunder surprised us all with 4 qtrs of aggressive and athletic hustle that held down the Lakers from making any kind of a major surge, eventually turning this game into a total beatdown by the time the 4th qtr started. The decisive win triggered rumblings of the Thunder upsetting the Lakers, who were favored to return to the Finals.

And now, on to today's games!

Down 0-3, Wade might as well dress up and shop around for a new contract.

When we last saw these 2 teams in Game 3, Dwyane Wade had been forced out of the final seconds of the game due to leg cramps. The Miami Heat neglected to commit the foul-to-give, allowing Paul Pierce to hit the game winning dagger, sending the Heat into 0-3 series hole. With Wade being a free agent this summer, today's game could be Wade's last game as a Heat, or at least his last game in front of the Miami crowd. With possible cramps in Wade's leg and a focused Celtics team, I just don't see how the Heat can win this game.

Speaking of free agents, here's another big free agent this summer: Lebron James. Lebron and the Cavaliers are favored to go to the Finals and win it all. But first, they have to show up and beat the Bulls. I missed this game, but according to the gameflow, the Cavs didn't show up and found themselves in a 21 pt deficit, but did stage a comeback and almost took the game away from the Bulls. I expect that loss to be a wakeup call for the Cavs, and I expect them to beat the Bulls tonight.

After stuffing his nose with tissue to stop the bleeding, Ginobili went right back into the game.

I hate Manu Ginobili's flopping, but I don't think he's flopped much in this series. What he has done is play through a hurt and bleeding nose suffered during Game 3 to help the Spurs beat the Mavs and take a 2-1 series lead. It turns out his nose is broken, and he will wear a mask for today's game, but he will definitely play. This is do-or-die time for the Mavs, much like it was when they faced Game 4 with us back in 2007. I don't know if the Mavs will adjust from Game 3, but I hope they lose the series just to silence that smug Mark Cuban. 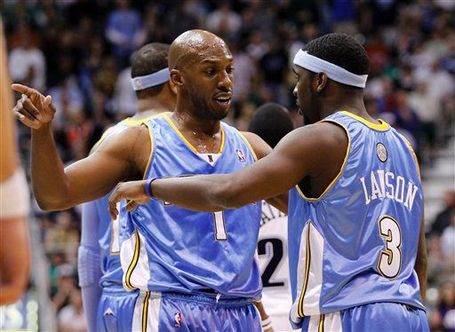 Chauncey Billups explains the "fork in the road" problem to Ty Lawson.

Something's wrong with the Nuggets. Whether it's the absence of George Karl, or adjusting to Adrian Dantley, or the rowdy Jazz crowd, the Nuggets looked sloppy and out of rhythm in Game 3. Like the Mavs, this game is do-or-die for the Nuggets. I'm not rooting for either side, and I have no idea if the Nuggets will adjust and come back for Game 4, but the Nuggets are far from the "Lakers contender" that many thought they were.