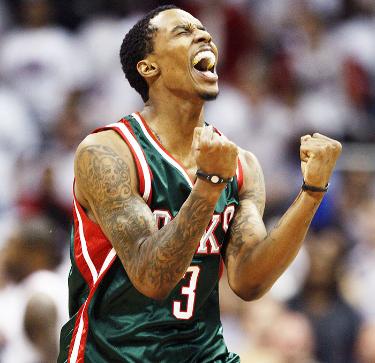 Not minding the headlights one bit. (via media.jsonline.com)

You think the Hawks feel like they've just hit a deer on the road?

...I was on a narrow two lane highway on a drizzly night. The deer literally leapt out of the thick woods into the road. I never saw the deer on the ground, it was airborne as soon as I saw it, and it landed on my windshield, towards the top where it meets the roof. The deer’s body sheared the roof back about two feet, separating the roof from the windshield. The deer’s body and the roof liner hit me square in the face…amazingly, I only have a very sore bump on my forehead, a sore neck from the jolt, and lots of glass splinters. Nothing I won’t recover from in a few days. I count myself very, very lucky. a few more inches lower, and the windshield would have taken the impact instead of the roof, and I would have no face left. instead, I emerged from the car covered in glass, deer fur and blood, with all three materials in my mouth, hair, and eyes. That was more traumatizing for me than the bump on the head. As for the deer, I never saw it again, the driver behind me said it did two or three full flips over my car, landed in the road, and ran off into the woods. CRAZY. I will never know if it ran off to die, ir if it will heal and live to perform more automobile acrobatics…and that will bother me for a very long time. I am going to install a deer whistle on my next car, as I have heard they are quite effective. Everyone is getting them for Christmas, too! I could get angry about the overpopulation of deer in this area, but then I must remind myself they we live in THEIR world, not vice versa.

MELO NOT LONELY: With Melo not doing it by himself, six Nuggets record double-figures in scoring, but Nene goes out with a sprained knee. I guess on a dysfunctional team, pointing fingers is a good thing...

DenverStiffs: a performance we can be proud of | SLC Dunk: Denver decides they would rather lose series in Utah 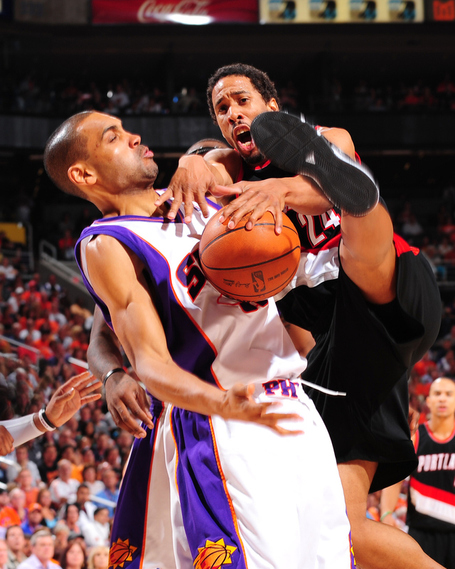 Mistah FAB: "grant hill is out there playin like he 27 that man damn near 40" (image via d.yimg.com)

Wow, the old guys are healthy and the young guys are injured. Who woulda thunk? I love this tweet from Mistah FAB...

Bright Side Of The Sun (no preview up yet) | Blazers Edge: Game 6 Preview 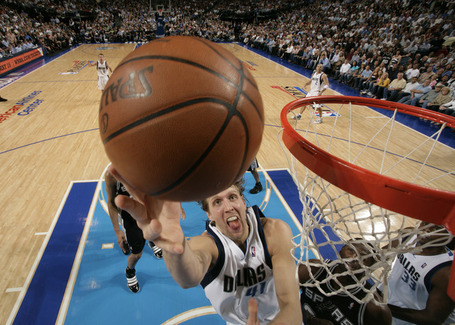 Ironically, he's got MJ's tongue wag (check other pics of him, it's there). (image via d.yimg.com)

It's kind of hard to believe the Spurs are the 7th seed, huh? I just don't know about Dirk Nowitzki. Jemele Hill at ESPN.com tweeted that the Mavs lost their manhood ever since Miami Heat turned the tables a few years back in the NBA Finals...

RT @jemelehill Only reason that DEN & DAL arent most disappointing IMO is bcuz DEN been sliding 4 a min. DAL lost manhood to Miami in '06

I think it's just that Dirk doesn't have a killer instinct, at least not consistently enough.

Just as Michael Jordan developed the mid-range jumper, Dirk needs to do the opposite of MJ. Dirk needs to work on going to the hoop more. He just settles and settles on that outside jumper. I've said it before and I'll say it again: a 40% jumpshooter is a 40% jumpshooter is a 40% jumpshooter. It evens out. The only way to trump that is to mix it up, take your man to the hole more often, draw some fouls. That's why you see superstar field goal percentages more near 50%. Seriously, I don't even need to look that up.

Mavs Moneyball: You wanted Game 6? You got it! | Pound The Rock: Game 6 Preview

Follow me @poormanscommish for occasional retweets of keen observations during the playoff games, like the ones we got from Mistah FAB and Jemele Hill.