Raptor's HQ break it down

Jay Triano could not have drawn up the final play of the game any better.

With Chris Bosh making free-throws 19 and 20 of the night, our Golden State Warriors struggled to in-bound the ball against Toronto's suddenly asphyxiating defense.  With a poor in-bounds pass bouncing into Chris Bosh's hands, Bosh miffed a point-blank layup with the ball skipping across multiple hands which seemed like an eternity until the clock finally hit 0.00.

It was a nail biter for sure and you know Triano wanted to make this game as thrilling as possible for Don Nelson's record-tying win for most wins ever.  I imagine the huddle, Triano telling Bosh:

"Hey Bosh, let's keep this game close.  I want Toronto to give Nellie a special gift for Easter.  I want to put Toronto on the hoops map as the place where Nellie makes history."

Bosh, a team-player and a respecter of the game, then acknowledges his coach's desire and does what he needs to do to secure the win for Nellie.  Triano probably whispered to him, too, "That playoff spot can wait one more game, we still got a few left and I like our odds."

The group hug afterwards was quite a sight to witness as I bet Nellie never imagined that this win would come with a team stocked with undrafted players.  For a coach who has consistently coached and developed all-stars and future hall-of-famers,  who would have thought this 23 win team, would bring him his record? 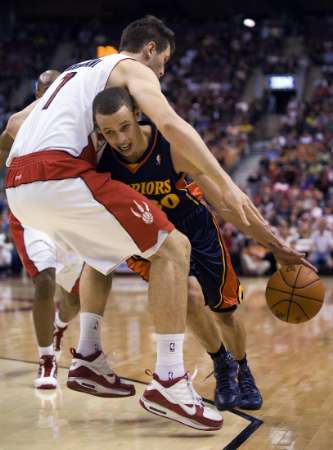 (Curry takes a moves from Bosh and learns to initiate contact)

The game was difficult to watch at times; then I remember that I'm watching a Warrior team with d-leaguers and I learn to temper my expectations.  Once that happens, I'm suddenly fascinated by how this team continues to find some semblance of success.

Stephen Curry, Anthony Morrow, and Corey Maggette got hot at the right times throughout the game, managing to stretch their meager leads of 1 to 2 points at just the right times to keep the Toronto Raptors beyond reach.  Maggette consistently hit 15 foot jumpers from the wing, only missing 4 shots en route to a 31 point effort.  He kept the Warriors afloat as Andrea Bargnani and Chris Bosh suddenly transformed into the most unstoppable twin towers, pounding it over and over again against tiny Warriors.  There was definitely an effort situation as Bargnani, a 7-footer who averages a measly 6.2 rebounds a game, could grab a rebound even when surrounded by 4 Warriors. 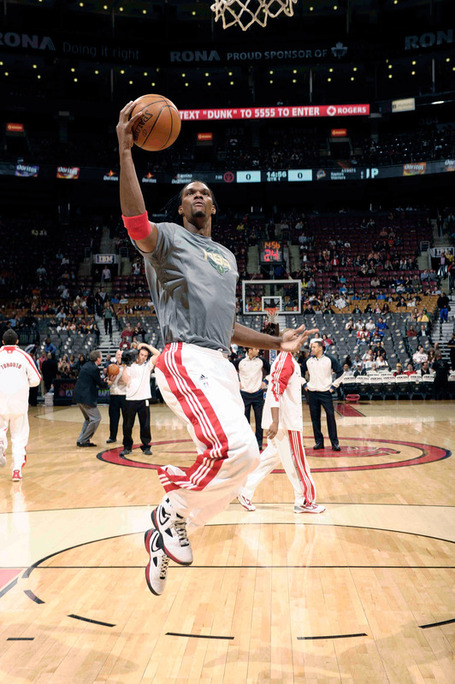 (Chris Bosh is so good at drawing fouls, the refs are currently deliberating on whether the Warriors already fouled him during warm-ups)

I would like to ask our readers and Raptors fans what the deal is with this former #1 pick.  From watching this game (and remember, Bargnani played against the undersized Warriors), this purported Dirk Nowitski-clone had several moments where he was more Shaquille O'Neal as he threw down one-handed dunks in the grills of almost every Warrior.  At other moments, he seemed more Andray Blatche...and I mean that in a bad way if you know what I mean.  You would think with Chris Bosh around, Bargnani would learn about how to use his size to his advantage.  Bargnani probably could have gotten to the line 23 times the way the refs were calling it. 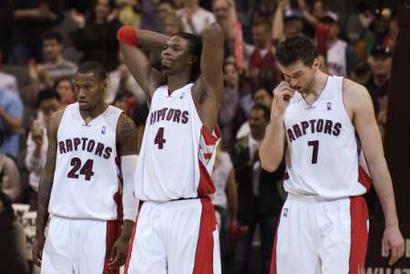 But Stephen Curry got super hot at the right time jump starting a 9-0 run midway through the 3rd quarter, hitting 4 consecutive jumpers.  Anthony Morrow, too, put it another consistent effort showing off a wider repertoire of moves, mixing up 3 pointer jumpers with his floaters to notch 25 points.  He and Curry should be called the "teardrop twins" for the way they both use their 10-15 foot floaters in the lane. 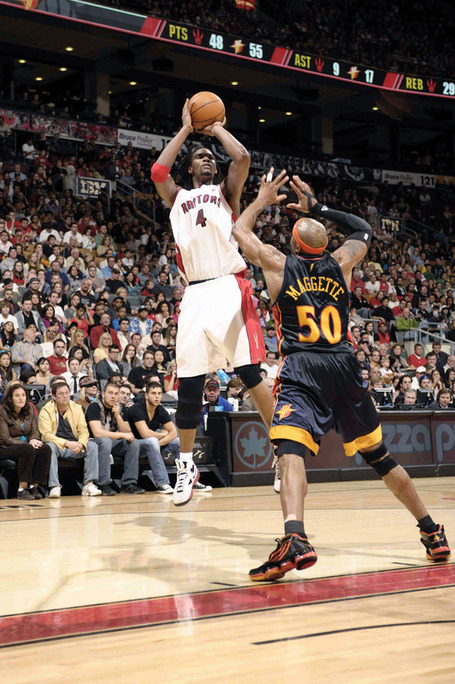 (Chris Bosh draws another foul when Maggette looked at him funny)

This little team continues to do the ‘unthinkable,' Alicia Keys.  They manage to pull off thrilling wins against the league's subterranean teams and then go back to being unbearable when facing playoff mainstays like the Utah Jazz.   Even crazier? They're beating teams without Monta Ellis.  I'm not implying anything, I'm just sayin... 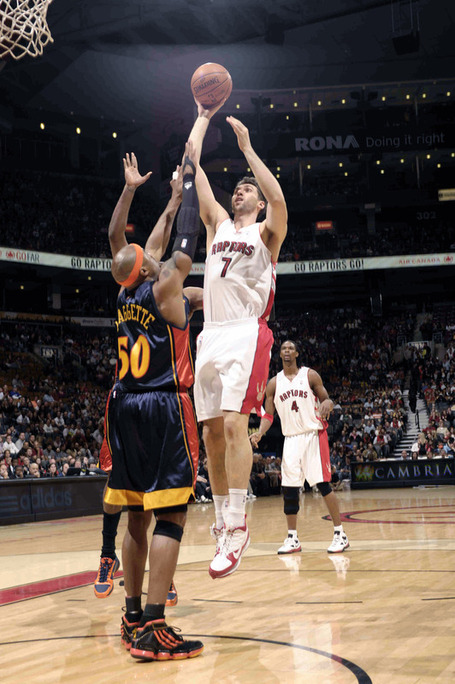 My recommendation for the rest of the season?  Just watch the games when the Warriors play a really bad team.  As you noticed today, you won't be (too) disappointed.

And where is Monta anyway?  Is the same "flu" that Hedo Turkoglu had?  Let's hope it doesn't reach epidemic proportions with the rest of the squad.  Unless freaky dancing and long island ice-teas is what the doctor ordered.

Y'all can hate if you want, but I want to give it to Corey Maggette.  Did you see this man's post-game interview?  Thanking god and giving props to his teammate for making the game easier for the rest of the Warriors.  That's classy.  Oh yea, shooting 71.4% from the field is pretty awesome too.