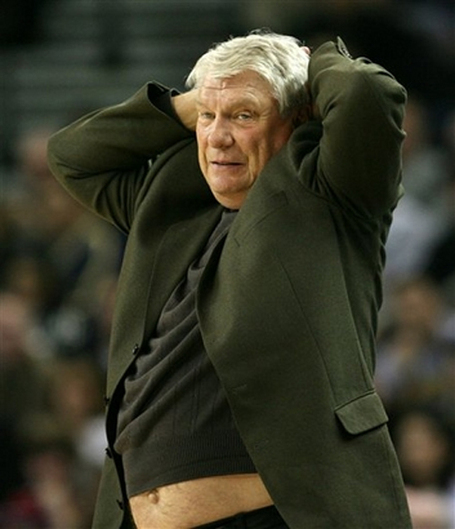 Don Nelson did not capture the all-time coaches wins record last night with the bad loss to the Wiz. So I'm going to be selfish. I'm going to the home game on Sunday when the Warriors play the Thunder and I want Don Nelson to break the record then. not today. I want to witness history in person. Unfortunately, the Warriors play the Wizards, Twolves, and Clippers prior to that game. They've already lost to the Wizards (we know how to tank better than you!) so the Warriors just have to suck 2 more games in a row against 2 of the worst teams in the league and then beat the Thunder at home. Just one flaw in my plan, the Warriors will have trouble losing to both the Clippers and Twolves, and beating a very very good Thunder team. Hmmmm, well whatever happens, happens. I want Nellie to break the record and the Warriors to lose the rest of the games for more ping pong balls - I hear Larry Riley is a table tennis master.

So about this Twolves game...I'm really pumped for it. Chris Hunter vs Ryan Hollins is like Wilt vs Russell. Al Jefferson vs Anthony Tolliver. Corey Maggette vs Ryan Gomes. Reggie Williams vs Corey Brewer. And the matchup you've all been waiting for, Stephen Curry vs Jonny Flynn. Steph's going to go bananas and make the Twolves regret again that they passed him up for Ricky Rubio (0 pts per game, 0 asts per game) and Jonny Flynn (13.5 pts, 4.4 asts).

One thing that's been going through my mind is that we all wish we had one or two really good or with potential to be really good big men. Minnesota has 2, Al Jefferson and when he isn't hurt, Kevin Love. Not that it would happen, but I'd trade our 2 big men for their 2 big men asap. Biedrins has been bad and Anthony Randolph was regressing prior to getting injured. The Warriors on the other hand have 2 very nice, though undersized guards - Stephen Curry and when he isn't hurt, Monta Ellis. I'm sure the Twolves would love our 2 guards to pair with their big men.

So, I wonder if you'd rather have one bad team's big men or the other bad team's guards. Which bad team is better off? It's not really a fair question given that the other guys on the team matter too but if you were to start a team based on Al Jefferson and Kevin Love or Monta Ellis and Steph Curry, who would you take?

The rest of the Timberwolves team is pretty ordinary, if not awful. They don't even have D-Leaguers on their team, how good could they be? Jonny Flynn and Corey Brewer have turned in decent seasons, but nothing special. The Ramon Sessions signing has been a disaster. Ryan Hollins? Wayne Ellington? Damien Wilkins? Any takers?

To be honest, the only other Timberwolf (?) that I'd have on my team is Ryan Gomes. He could be my 10th man, but the problem is he's starting for the Twolves. I thought he was a Warrior killer but in 2 games against the Dubs, he's averaged 25 minutes, 6 points, and 5 boards - quite underwhelming to be a Warrior Killer. Who will be the Warrior Killer tonight? I'm going with Corey Brewer.