From a franchise standpoint, the Oklahoma City Thunder are getting their due, despite getting eliminated by the Los Angeles Lakers last night on a Pau Gasol tip-in with 0.5 seconds left. I'd even go so far as saying that OKC has got to be the shoo-in favorite to win the Western Conference next season, after this gutsy performance against a championship-ready roster like the Lakers.

They started calling the Ford Center the "Thunderdome" last week after they got really excited that it reached 109 decibels. Last night, ESPN posted the graphic showing Russell Westbrook's late-game clutch and-one resulted in a 112-decibel reading. Then columnist Arash Markazi tweeted that the Thunder fans were "easily the best fans in the NBA". 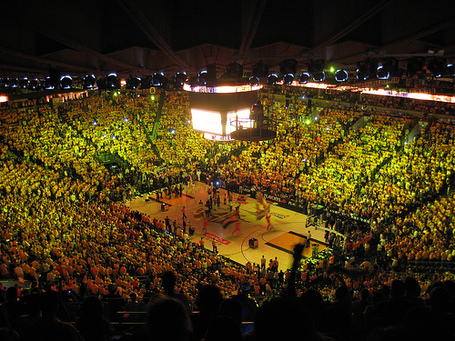 According to the someone's posting in the comments from the recap of May 3, 2007, KNBR said that the decibel meter that night reached 121, which I suppose would be difficult to fully confirm. The record is still Arco Arena's cowbell-induced 130.

That night at the Roaracle, it was most probably at least 112 decibels, if not 121.

Here's the graphic from last night's game showing you how deafening that is... 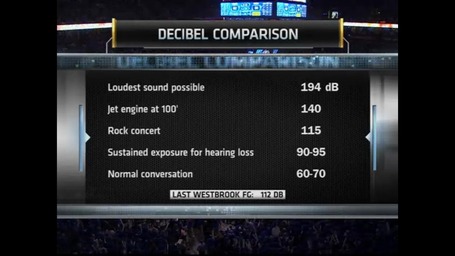 The difference is this. We at Oracle Arena actually averaged more per game this year than the Ford Center: 18,027 to 18,003, despite having the fourth-worst team in the league.

I'm sorry, but while the Thunder do have great fans, they are not "easily" the best in the NBA.