There's that je ne sais quois about Kobe Bryant that we Warriors fans can't stand. I sure hope LeBron James isn't trending in that direction. The video above via North Station Sports blog doesn't help.

SIXED!: NBA Sixth Man of the Year and one of the many guys the Warriors front office has outkast (spelled with a "k" because, of course, he in the A-T-L now), Jamal Crawford, leads the Hawks with 24 points, forcing Game 7 tomorrow.

Peachtree Hoops: You had me at hello | BrewHoop: Hawks in driver's seat, deer in the headlights

But before we move onto today's BOS-CLE preview for Day 15 of the 2010 NBA Playoffs, let me just say a few words about Kevin Durant... 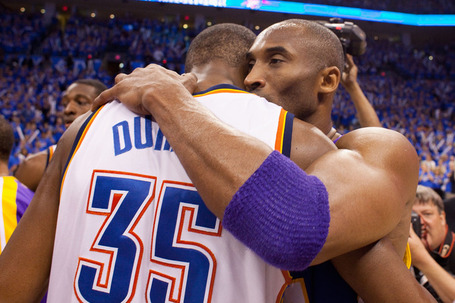 He shakes hands after losing, too. (via d.yimg.com)

"A lot of kids come to my door asking for autographs or just want to talk,'' Durant said before Friday's Game 6 of a West first-round series against the Lakers at the Ford Center. "That's pretty cool, especially around playoff time. A lot of kids like to come around and stuff. I guess they're on spring break.''

When he is home, Durant said it would never occur to him to tell kids stopping by he can't be bothered during the playoffs.

"No,'' he said. "Because if I was a little kid and I knew an NBA player lived down the street, I'd do the same thing."

There's been a lot of talk about KD being the best player in the NBA in three years, as Kenny Smith said on TNT last week. Well, I'll say this much...

At the rate we are going, Kevin Durant will be the most liked player in the NBA in three years.

There are even some folks in New York who aren't exactly clamoring for the King to come to the concrete jungle where dreams are made of... 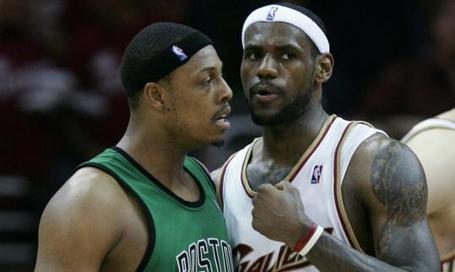 Truth vs King. Should be a good one. (via cache.boston.com)

This one's about to get testy!