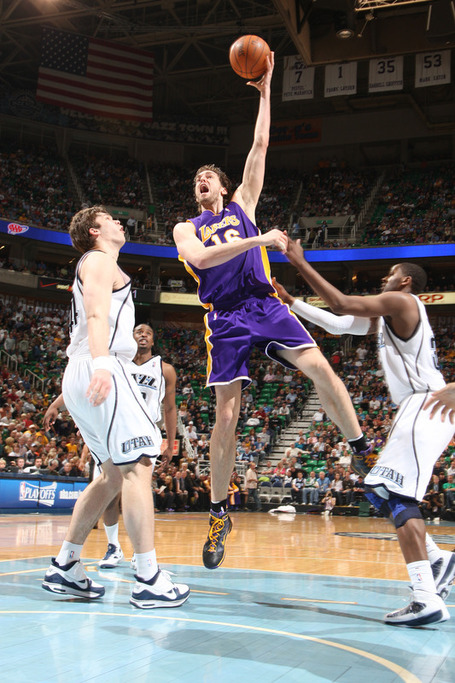 I've been betting against my heart and against the Suns every series so far this playoffs. This series will be no different. I absolutely love Steve Nash -- I watched virtually every one of his games with the Mavericks. I love Alvin Gentry, the Suns coach. I love Suns basketball, which is the closest you can get to Don Nelson basketball without having Nellie himself. I was very impressed by how the Suns picked apart the Spurs in the last series.

But I don't see any way they can beat the Lakers. Jump for the reasons why the Lakers meet the Celtics in the 2010 NBA Finals:

I'm not even sure the Suns will be able to keep Stoudemire on the court. How can he keep Bynum, Gasol and Odom off the boards without fouling?

Nash v. Fisher: This looks like a solid win for Phoenix, but is it? Fisher will get a lot of help, obviously. The Lakers front line will limit Nash's penetration. Expect Nash to shoot a lot of jumpers.

The Lakers also have the wildcard in this matchup: Kobe Bryant. Expect to see him guard Nash in the fourth quarter, when necessary.

Jason Richardson: Richardson has shined so far in these playoffs, largely because his three point shot has been on, and the Suns' opponents had trouble guarding either Stoudemire or Nash. The Lakers will have no trouble single-covering Stoudemire, and should be able to keep Nash out of the lane. That spells trouble for Richardson, who cannot create his own shot against a good defender.

He'll be defended by Kobe and Artest. Good night.

Grant Hill v. Kobe Bryant: I'm pretty sure this is how Gentry will use Hill, since Richardson is worthless as a defender. Hill might cause Byant problems, but I'm not sure it will matter. On offense, I don't expect Hill to be the factor he was against the Spurs. He hasn't seen anything like the Lakers' length and quickness so far. He will also be far less of a factor on the boards.

Amundsen, Dudley and Dragic v. Reality: The much-hyped Suns bench has had a good run so far in these playoffs, because of some favorable matchups. That's over now. Amundsen and Dudley can't overpower or outquick anyone on the Lakers' frontline. Their sky is about to go dark. 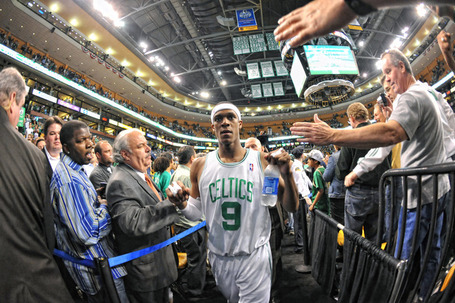 This series is very difficult to handicap, due to the fact that the Celtics were injured for much of the season, and the two teams haven't played each other in three months. I think I like the Celtics for a small bet against the price. Here's why:

Dwight Howard v. Kendrick Perkins, Big Baby Davis, Rasheed Wallace and Kevin Garnett: I think you see where I'm going with this. The Celtics have 24 fouls to throw at Howard, who is a 59% FT shooter. Which means they'll be able to single guard him much of the time. Which means the Magic's vaunted three point shooters will be far less open.

Dwight Howard v. Rajon Rondo: This may be the single biggest key to this series. Howard is the Magic's last line of defense against Rondo's penetration. Howard was in constant foul trouble against Charlotte, which had no choice but to penetrate on every possession. If the Celtics use Rondo and Pierce to follow Charlotte's gameplan, can Howard keep himself on the floor?

It is the Celtics who are deepest on the front line.

Rondo v. Jameer Nelson: Nelson has been the Magic's unsung hero so far in these playoffs, averaging 20 points and 5 assists. He's going against an all-world defender now, who is at the top of his game and full of confidence.

A huge matchup. I'm not completely confident that Rondo will dominate, as I was in his last matchup against Mo Williams. But I am confident that Nelson will not have anything close to the free ride he's had so far.

I think the Magic need a huge series from Nelson to beat the Celtics. Is that possible?

Pierce and Allen v. Carter, Barnes and Pietrus: I put both matchups together because they will be cross-matched much of the time. Stan van Gundy has already indicated that he will putting Barnes on Ray Allen. Carter simply can't chase Allen around those screens.

I think this works in Boston's favor. I don't think Carter can guard Paul Pierce either, if Pierce is healthy. And Pierce is a tremendous defender who can guard Carter. We've seen what he can do against Kobe and Lebron. How much trouble can Carter give him?

Van Gundy may have to capitulate on this matchup later in the series. I think he will need Barnes' toughness against Pierce.

Garnett v. Lewis: This is an intriguing matchup because the players are so obviously different. Lewis will pull Garnett out of the lane, which obviously works in the Magic's favor. But will he be able to guard Garnett's post-ups on the other end? Garnett looked pretty good against Antwan Jamison. Lewis is longer, but no less soft. I think for Lewis to win this matchup, the Magic's fastbreak must seize control. Which brings me to:

The Magic's fastbreak: It's no secret (except to Mike Brown and Phil Jackson) that the way to beat this Celtics' team is to run their old men off the court. The Magic have the coach and the personnel to do it. But can they control the glass?

If Dwight Howard can stay out of foul trouble, and the Magic can get their fast-break going, many of the Magic's matchup problems will simply disappear. The team that controls the pace will control this series.

Championship toughness v. Marshmallow softness: On the one side, Kevin Garnett, Rasheed Wallace and Paul Pierce. On the other, Rashard Lewis and Vince Carter. Who would you take in a WWE death match?

If this series is as closely matched as it appears, this factor should not be underrated.

I'm willing to bet a case of Fat Tire against two cases and a six pack that the Celtics shock the world.