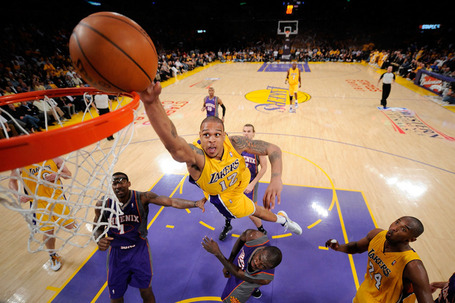 Half an inch from immortality

Jump for a rewind of Game 1 between the Suns and Lakers, and a preview of tonight's Celtics - Magic warfare!

The high-flying Phoenix Suns, facing for the first time in these playoffs a team whose best player is not injured (err... wait a second...), came crashing down to earth in Game 1 against the Lakers.  Despite some terrific lineup adjustments by Coach Alvin Gentry -- trying to hide JRich (a team leading -24) on Ron Artest, and trying to hide Amare Stoudemire (-23) on Andrew Bynum -- the Suns could find no answers against Kobe Bryant and the long and talented Lakers frontline.

Commentator Doug Collins said we should expect to see the Suns go to a zone defense in Game 2.  I don't think it will help much. Phil Jackson has indicated a desire to attack the porous JRich wherever he is on the court, and Stoudemire is second on the list. In addition, Dudley and Amundsen are powerless against the quickness and length of Lamar Odom. Grant Hill is the obvious choice to guard Odom, but then who would guard Kobe?

The Suns don't have enough fingers for this dike. 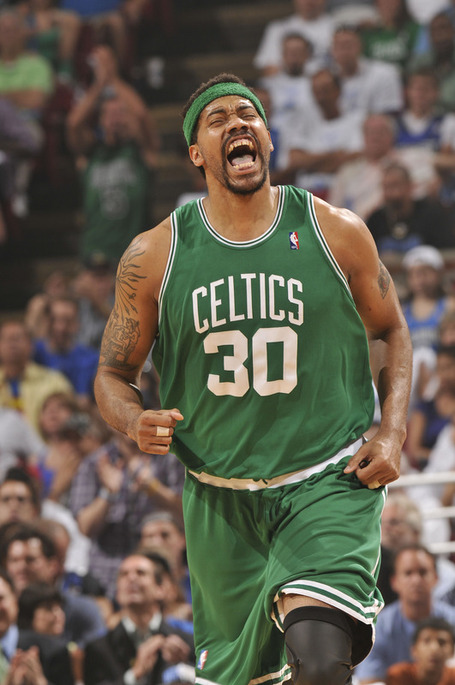 Game 1 was a simple beat-down. Kendrick Perkins and Rasheed Wallace played Dwight Howard one on one, and shoved, hacked and scowled him into a dreadful performance. Kevin Garnett's length and quickness forced Rashard Lewis into a 2-10 (0-6 from three) shooting night. And in general, Boston's ability to guard every one of Orlando's players without giving help allowed them to smother Orlando's vaunted three point shooting (5-22, the exact line the Suns put up from three, which is less of a coincidence than it looks).

A lot of questions face the Orlando Magic going into game 2:

Have we seen the best that Dwight Howard can manage against Perkins and Wallace? He looked unpolished, discombobulated and frustrated in game 1.

Can the Magic actually initiate offense by throwing the ball in to Howard in the post? If not, then where will they turn? Jameer Nelson did a nice job creating his own shot against Rondo, but he failed to create any easy buckets for his teammates, getting a mere 2 assists. The same thing occurred with Vince Carter.  The ball didn't move when these two players touched it.  That's a recipe for disaster against the stifling Celtics defense.

Much has been made about the Magic's offseason "upgrade" from Hedo Turkoglu to Vince Carter. I beg to differ. We're seeing right now just how much the Magic miss Turkoglu's ability as a point-forward distributor.

The Celtics, by contrast, have beautiful ball movement.  Rondo is a great point-guard, but the special ability of Pierce, Allen and Garnett to set up their teammates should also not be overlooked.  The Celtics had 21 assists as a team in the first game, to 10 for the Magic.

Game 2 is an obvious must-win for the Magic, and they should prevail against a Celtics team that has already seized home-court advantage.  But will the Magic find the answers they need to get them a win in Boston?