NBA Draft Lottery: The best and worst #6 picks of all time -- Golden State Warriors are in a better position than we thought?

Share All sharing options for: NBA Draft Lottery: The best and worst #6 picks of all time -- Golden State Warriors are in a better position than we thought? 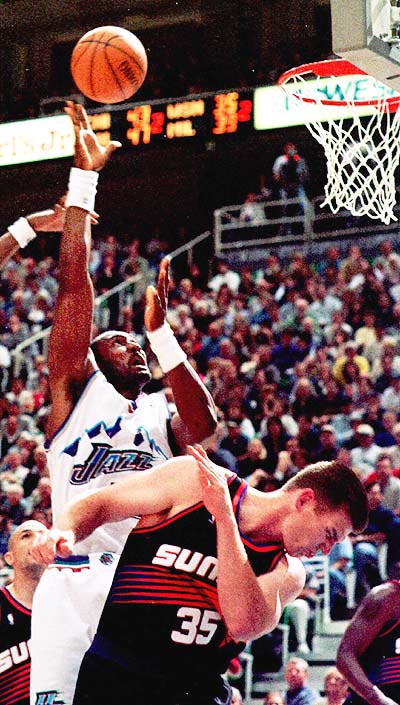 (Will the Warriors take Cole Aldrich with the 6th pick and end up with Joe Kleine 2?)

While we lament about the Warriors perennial poor fortune when it comes to the lottery (and everything in general), draft history has shown that the 6th pick has not been as bad as it may seem.  In fact, last time Nellie had his hand in the 6th pick, he transformed Robert "Tractor" Traylor into Dirk Nowitzki.  Maybe Nellie will transform Cole Aldrich into John Wall?  All I'm saying is that the 6th pick maybe be a blessing in disguise.

After sifting through over 50+ years of lottery drafts on NBA.com, the #6 pick has been equally bad as it has been equally good.  And there's even a few surprises along the way.  In fact, one might say that a decent or average player at #6, as opposed to the top 5, may end up always exceeding expectations given the low expectations for a "star" in the mid-lottery.  Click more to see the top 6 #6 picks as well as the worst 6 #6 picks (in my opinion of course) to cheer you up.

2. Adrian Dantley (1976) - Scoring titles, all-star appearances, and several winning seasons for the Pistons.  Most notable as being the reason why the Pistons got over the hump to win back-to-back championships.  That meaning, he was trade bait for Mark Aguirre.

3. Kenny Smith (1987) - Two championship rings, one of the most inventive dunks in a dunk contest, and, more importantly, a hilarious and insightful member of the TNT Inside the NBA cast.

6. Lionel Hollins (1975) - Up until this season, Lionel Hollins has been quite a bust as a coach.  But his ability to revive Zach Randolph's career and make Marc Gasol look like Pau Gasol is definitely up there.  Perhaps the Nellie will draft a future coach, a successor, with this pick?

The Bad News (in no particular order):

1. Yi Jianlian (2007) - After all the hype about being more culturally westernized for liking hiphop and driving a shiny SUV, Yi Jianlian was supposed to be the answer for the belief that international players were soft and lacked attitude.  In reality Yi has been China's worst import, far exceeding the toys with the chemicals that can make kids sick.  Lightening quick flashes of brilliances amidst huge puddles of suck, Yi makes Wang Zhizhi seem like an all-star.

2. Ron Mercer (1997) - I put Mercer on this list not because he was necessarily horrible.  In fact, he statistically was pretty productive.  But, Mercer was one-dimensional and never seemed all that excited to be playing basketball.

3. Joe Kleine (1985) - Joe Kleine went on to have a long career, contributing to several solid, playoff teams.  But I am annoyed and confused by big men like Kleine and his contemporaries like Adonal Foyle and Chris Mihm, big tall guys that manage to collect pension when folks in the d-league (or elsewhere) could be just as good if not better insurance policies when your #1 or #2 center goes down (Chris Hunter comes to mind).

4.  Stacey King (1989) - King was an important part of a several Chicago Bulls teams.  But I really expected a lot more out of him given that he put up monster stats his senior year in college.  Plus, Stacey was a tough guy's name back in the eighties and early nineties.  He should have milked that for all that was worth during that era!

5. Martell Webster (2005) - You know, the Pacific Northwest is a surprising hot bed for hoops, to me at least.  But as far as pros go, I wouldn't say that they have been that phenomenal.  Webster, considered the next Dale Ellis of sorts given the Pacific Northwest connection where Ellis spent his career and because Webster had a great shooting touch, has hardly been what they expected him to be.  Although he's a decent 37% 3-point shooter, proving to be quite good this past season on occasion, he's still a a 40% shooter on average.  You could also blame the overstocked Blazers and their wacky rotation as part of the reason for Webster's stunted development.

6. Dajuan Wagner (2002) and DerMarr Johnson (2000) - I hate to put unfortunate circumstances as reason for someones "bust" label.  They're more disappointments more than anything.  Wagner was supposed to be the next Allen Iverson and he had the celebrity mythology to carry him to stardom.  Johnson was a tall, long, and versatile point guard who, as we all know, put his career in jeopardy after crashing his car into a tree nearly causing paralysis.  After bouncing around the d-league, europe, and the NBA, DerMarr Johnson did not learn his lesson yet in 2008 the problems of driving wrecklessly.  He was pulled over for driving 20 miles over the speed limit, which he then failed a breathalyzer test.

I'm sure there are bigger busts and better stars than the ones that I have listed.  Hey Fuzzy, what about Orlando Woolridge in your top 6?  What about Sharone Wright in your bottom 6??  We could probably argue that Wally Szczerbiak deserved to be on either of the lists - a bust and a decent player.  There is no right or wrong answer.  BUT, my point is perhaps hope is not all lost.  There has been as many notable #6 picks that have gone on to have decently successful careers.  Josh Childress anyone? We could even argue that #6 pick might even be pretty great if it wasn't for the freak injuries and diseases that cost the careers of Dajuan Wagner and Bryant Reeves.  So, look on the bright side Warrior fans, we didn't get #1 pick, but we didn't get Michael Olowakandi, Kwame Brown, Kenyon Martin, Andrea Bargnani, Pervis Ellison...right?