Still two weeks before the draft lottery, aka "Our Playoffs" — May 18, mark your calendars — but I thought now would be as good a time as any to start trying to visualize our odds. If this graphic is worth a damn, it should speak for itself, so I'm going to throw it out there without further ado. (Further ado below, for people who enjoy hearing me babble). 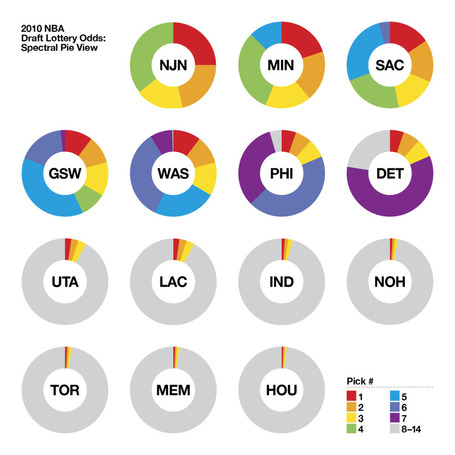 First off, thanks to genesic, whose excellent diary on this subject was the, er, genesis for this one. Without his mad math skills, I don't think I would have been able to figure out how the three ties (GS/WAS, PHI/DET, UTA/LAC) affected the overall odds for everyone. (Two minor corrections for you, genesic: you transposed Philly and Detroit in your table — Philly won their coin toss battle — and missed a decimal place in your listing of Detroit's chances of landing #8).

The other inspiration for this was a board game I used to play somewhat fanatically as a kid called All-Star Baseball. 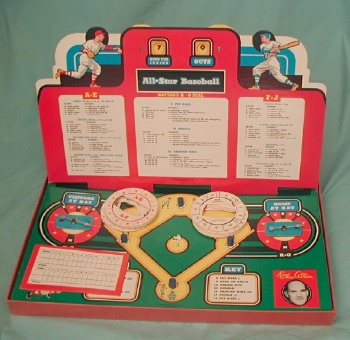 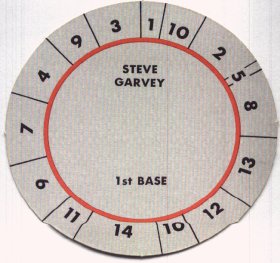 Setting aside the game's (rather major) flaw that it failed to factor in pitching, I always thought it was really well-designed and fun. Each player was converted into a disc – basically a pie chart of their career statistical output, with numbers representing various results (1 = Homerun, 5 = Triple, 10 = K, etc.) You would stick the disc in the game-board, and spin a little metal arrow to generate a result. In retrospect, the disc was a masterpiece of graphic design, in that once you knew what the numbers represented, you could get a really good overall sense of how valuable a player was — their ratio of out-to-hit, homer-to-single, etc. — at a very quick glance. Before the era of SABR, the discs gave my brother and me a keen sense of the value of the base on balls: bigger BB segments meant smaller out segments, which meant greater likelihood of extending innings and piling up runs.

My favorite part of the game was always draft time, when my brother and I would lay all the players out on the floor and pick teams for the upcoming "season." Because of the graphic simplicity of the pies, you could look at all the players and make snap global judgments about who was better than whom. The game's more sophisticated counterpart, Strat-o-Matic, never really captured our imagination, in large part I suspect because its use of spreadsheet rather than graphic chart didn't allow for this kind of elegant visual comparison.

Back on topic ... I'm curious to see whether people find this chart illuminating or confusing compared to just looking at the spreadsheet that genesic provided. One of my graphic design idols is the cranky genius Edward Tufte, whose handsomely illustrated books have kind of become the bibles of good information design. One of the things that irks him to no end is what he terms "chartjunk" — basically, misplaced use of cheezeball graphics where the visual aspect adds nothing, or even subtracts, from the data presented. The poor graphic designer will frequently try to "spruce up" information that would be clearer as a simple, unadorned list of numbers.

Personally, I think looking at the odds in this form allows a depth, breadth, and speed of understanding that a simple spreadsheet doesn't. I think that the spatial comparison of odds reads more clearly than a numerical one; that the hot-to-cool color range gives a quick-and-dirty sense of "good pick" v. "bad pick;" and that the pie chart shows clearly that each team's odds at picking in various slots, must, by definition, total one (which seems obvious enough, but some GSoM old-timers may remember some rather heated debates on the subject). Anyway, I'm curious to hear what others think. Are the pies any clearer than the spreadsheet? Less clear? Funner and more colorful, but not really any different?

So ... what can we see from these pies that might not be quite as obvious in numerical form? Well, for one thing, in a draft that looks to be about 5 or 6 studs deep, our Warriors look rather well-placed. If you compare our current position to the #8-12 range where we habitually pick, the contrast is stark. Imagine sticking us in a spinner, All-Star Baseball style, and spinning away. Chances of landing on picks #1, 2, 3, or 4 seem pretty decent, right? Now imagine doing the same for Indiana or the Clips ... much less decent. Indeed, for a team like Indiana, it wouldn't be at all surprising to spin 20 or 30 times in a row without hitting lotto. For those who like to imagine the Warriors have been cursed in the lottery, I hope the pies from #8-14 open some eyes. We're not cursed; we've just tended not to tank hard enough (or if you prefer, suck badly enough) to have realistic odds at a lottery pick.

Looking a bit more closely at our chart — 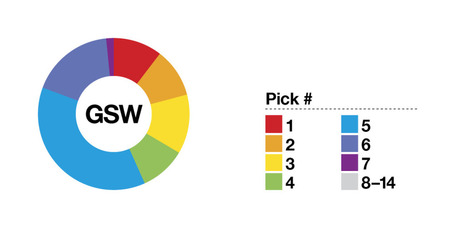 — I think another thing the pie does a good job of highlighting is that, while the #5 pick is our most likely single scenario, it's still not overwhelmingly likely. Indeed, our chances at picks #1-4 marginally outweigh our chances at #5. Number 6 is worrisomely big, but Number 7 is pretty reassuringly small [knocking wood furiously].

All in all, I think it's a pretty tasty-looking pie, especially when you consider how easily we could have lost the epic coin toss v. the Wiz; or the fact that by point differential, we were only the 9th worst team in the league (much better than the #9 seed Clippers, for example). Yeah, it might have been nice to have slid into Sacramento's spot, but, hey ... they richly deserved their delicious pie by sucking even worse than Steph and the D-Leaguers. I think in the end we managed a pretty neat trick by closing the season on a semi-cheery note while still avoiding too many meaningless late season wins. Bravo, team! Now let's get a new owner and knock one out of the park on 18 May.

Which could you least live without?