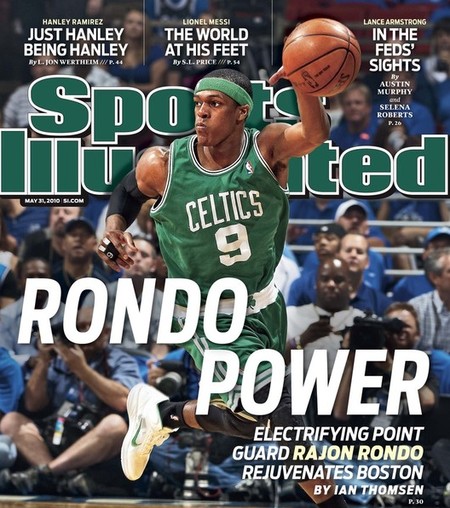 Wow, Rondo gets the Sports Illustrated cover and immediately suffers debilitating back spasms.  Spooky.  Rondo bore no resemblance to the player that has dominated the playoffs yesterday.  Couldn't run the court, couldn't drive the lane, couldn't finish, couldn't stay in front of Jameer Nelson.

Not to take anything away from the Magic. Stan van Gundy has made several nice adjustments that finally have the Magic looking like a team on the offensive end.  After two games of watching van Gundy use JJ Redick as the provisional point guard, Nelson finally got the message and started looking to set up his teammates.  The Magic abandoned trying to post Dwight Howard up in the teeth of the Celtic defense, and started hitting him on the move in the pick and roll, exploiting his superior mobility. (Are you taking notes, Big Chief Triangle?)

And on defense, van Gundy finally abandoned the Vince Carter on Paul Pierce experiment.  This is a job for former Warrior co-captain Matt Barnes, whom Jeff van Gundy called the Magic's fiercest competitor. I agree.

But to my eyes, the greatest difference between this game and the previous three was Rondo.  His limited mobility turned Nelson loose, and opened up the floor for the Magic's offense.  So long as Rondo is hampered by his back spasms, the Celtics are in trouble. And the longer this series goes, the more the aged Celtics will begin to wear down.

Don't look now, but this could turn into an electrifying series.  I fully expect the newly confident Magic to dominate in game 5 at home, while the ossifying Celtics take another game off.  Which means game 6 in Boston will be for all the marbles.

Personally, although I have a bet on the Celtics, I would love this series to go seven, just so I can hear Jeff van Gundy call Vince Carter a spineless dog on national TV a few more times.  I just can't get enough of that. 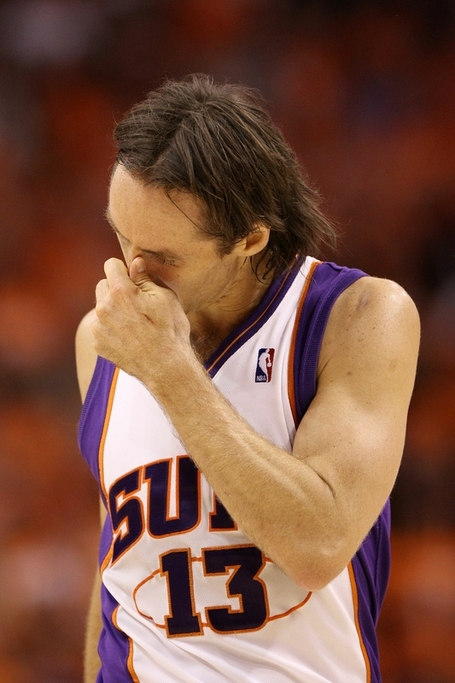 What happened in game 3?  Did Robin Lopez join the ranks of the league's elite centers? Did Amare Stoudemire reawaken for good?  Did Alvin Gentry's latest defensive "gimmick," the 2-3 zone, really expose a Lakers' Achilles heel?  Or did the Lakers simply take a game off?

We'll get some answers tonight, as the Lakers and Suns meet for game 4.  Including whether Steve Nash can play effectively through the broken nose he suffered in game 3, courtesy of an "inadvertent" Derek Fisher head-butt. (Am I the only one who is getting sick of watching Fisher play?  Not content with rearranging Nash's face, Fisher also delivered a forearm shiver to Amare Stoudemire's dome, opening up a nice cut between his eyes.  Fisher has a well-earned reputation as a hard-nosed player.  Is it time to regard him as simply dirty?)

Other answers we'll be looking for:

Blood has been drawn.  This one's getting testy.  Let's get ready to rumble!