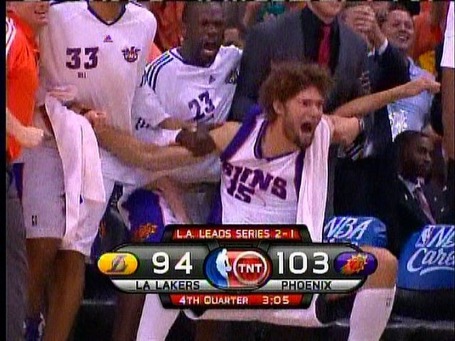 To hold us over until tomorrow, we have the Eastern Conference Game 5 between the Celtics and the Magic. Make the jump for some more reading.

I completely missed Game 4, so pardon me for grabbing bits and pieces of info from here and there. Somehow, the Magic hung on to beat the Celtics in overtime in Game 4. I heard that Rajon Rondo suffered from back spasms, or muscle spasms, or cramps. Whatever it was, the story I heard is that he didn't look like himself, and that weakened the Celtics enough to let the Magic edge out the win in Game 4.

It turns out that Rondo isn't the only one suffering. On the Magic side, Rashard Lewis has been fighting his own health issues this series: a viral infection. He says he's been sick the entire series against the Celtics. He's been throwing up and feeling weak with no energy. The word is he'll take some IVs and go no matter what.

In any case, I've read a couple of comments about a Magic comeback in this series. It's too early to talk about the Magic being the first NBA team to come back from an 0-3 deficit. If the Magic win today, well, maybe they can. If they win Game 6, hoo boy it really could happen. Until then, I'm not ready to put the Magic and historic comeback in the same sentence.