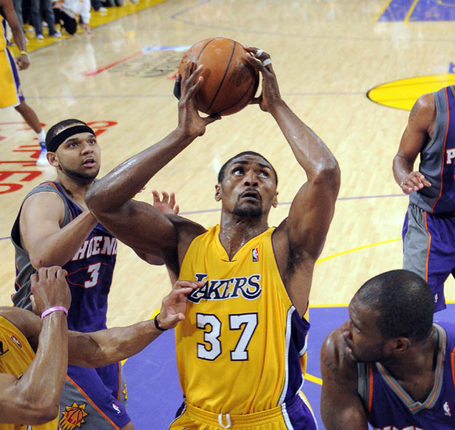 If only the buzzer had sounded at THIS moment.

That was a hard lesson learned last night: Never stop playing until the whistle is blown or the buzzer sounds. Until then, keep playing, keep defending, keep rebounding, keep boxing out, keep moving. It's too bad it was JRich who had to demonstrate that lesson to the rest of us, especially after he had just banked in a 3 to tie the game.

I'm sure he feels terrible about letting his man Ron Artest clean up the airball for the win. Hopefully one of the Suns fans show him the JRich ad that esco41510 placed in the Arizona Republic that Warriors fans paid for. That should remind him that we still support him and that there's still a Game 6.

Meanwhile, on the other side of the US, the Magic won 2 in a row and are halfway to a historic comeback. They play Game 6 tonight in Boston. Make the jump for some more reading.

Big Baby Davis was so woozy, referee Joey Crawford had to catch him and hold him up.

The task today will not be easy. Injuries are a concern for the Celtics. Big Baby Davis suffered a concussion in Game 5 from Dwight Howard's elbow, but he is likely to play tonight, though I won't take that to mean he's fully recovered from the concussion. Marquis Daniels also suffered a concussion, and he is out. Rasheed Wallace is a game time decision with a stiff back. He had looked uncomfortable late in Game 5 and went into the locker room. And then there's always a few lingering questions about Rajon Rondo's back spasms from Game 4, but the word is that he's OK.

At least Perkins' T was rescinded, so no suspension for him. Nevertheless, this adds up to a weakened Celtics team, and a better chance at the Magic making history. Let's do this.