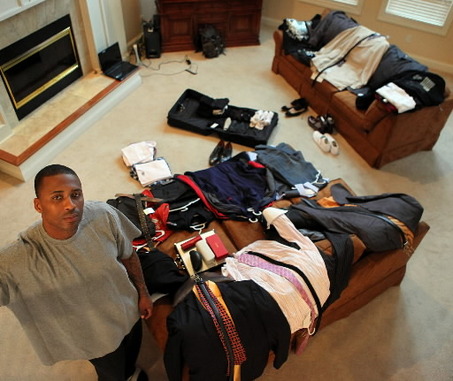 Think there's a "low-speed" Moped track in the backyard?

Jump for the details!

Words by Ronald Tillery from The Commercial Appeal with comments inserted:

Golden State guard Monta Ellis' decision to purchase an Eads home formerly owned by Memphis native Lorenzen Wright does not mean the Griz and Warriors have re-ignited trade talks from earlier this season.
The Griz are not trading for Ellis, according to a team insider.

Sure they're not- I love the posing by the Grizz front office.

Ellis, a Jackson, Miss. native, purchased the home along with Juanika M. Amos (reportedly a Memphis-area native) after Wright and his wife, Sherra, defaulted on a $2.7 million construction loan last year.

A $2.7 million loan in the Bay Area buys you a nice 5-6 bedroom house in an "uppity neighborhood". I can only imagine with $2.7 construction loan buys you in Memphis. MTV Cribs easily.

The teams never came close to a deal.

Correction. If it hadn't been for Robert Rowell (who stubbornly and ignorantly holds onto this false notion that Ellis sells tickets) this deal would probably be done. People who know basketball (ahem, Don Nelson) would have done the rumored deal "in a heartbeat". I'm willing to bet money (not $2.7 of course!) that this is just the Griz sending out vibes via the media to: a) understandably try to mitigate any annoyance the rumors caused Mayo and b) potentially try to get the Warriors to up their offer.

Don't believe for a second that the Grizzlies wouldn't love to have local talent Monta Ellis playing on their team.

Don't believe for a second that the Warriors wouldn't love to send Monta Ellis and his low hoops IQ, ball-hoggery, league-leading turnover rate, and "can't do it" attitude about fan fav Stephen Curry on a moped to Middle of Nowhere, USA.

Don't believe for a second that this team wouldn't be better without him for a multitude of reasons. Hey, there's a reason my man JAE gave Ellis and his gaudy and inflated 25.5 ppg this past season a big, fat, solid D.