Bringing awareness to the disturbing Arizona anti-immigration law (via i2.cdn.turner.com )

LIVIN' LARGE. Dwight Howard had 5 blocked shots as a varsity team beat up on a JV squad in a scrimmage that somehow made it on TV. FYI, Atlanta Hawks frontline: Al Horford a generous 6'10", Marvin Williams a generous 6'9", Josh Smith a generous 6'9". So So Def Small.

The Orlando Magic take a 1-0 series lead over the Hawks.

LIVIN' LARGER: Why hasn't anyone used the term "twin towers" with these Los Angeles Lakers? Is it because, back in the day, the original twin towers (Ralph Sampson and Akeem Olajuwon, later changing his name to "Hakeem") tore the Lakers' hearts out that one year?

Anyways, it's simply unfair: Pau Gasol (7'0") and Andrew Bynum (7'0") vs slow-footed Kyrylo Fesenko or Kosta Koufos (7'0") and Carlos Boozer (6'9"). I do enjoy watching Wes Matthews, C.J. Miles, Ronnie Price, and Paul Millsap overachieve. The series should get better as Andrei Kirilenko is expected to come back for Game 3.

Lakers lead the series over the Utah Jazz, 2-0.

Silver Screen And Roll: A walk in the park | SLC Dunk: The downbeat 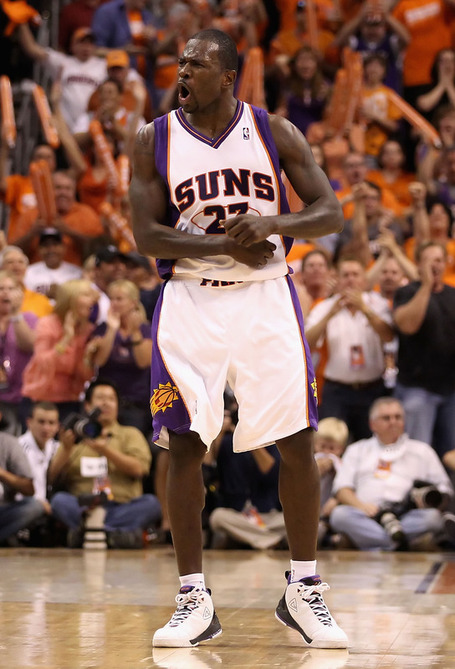 It's just great to see J-Rich pouring in 24.0 ppg in these playoffs. On any other website, we would say "unstoppable baby!!!"

The buckets are mostly in transition so you can't really blame Manu Ginobili. Speaking of which, I just have to say, this Manu is incredible. Any other era, they'd be talking Top 50 all-time great. I love how he hardly lets the referees ever affect him (i.e., the late charge call in Game 1 that looked a bit questionable in real time, and then they never replayed it so we won't ever know for sure, but Manu just moved onto the next play after that).

And did you see that dribble-drive from the right elbow, going past one man, then behind-the-back to his right hand to avoid the next, then a fake kick out to the corner, at which point he froze the 3rd line of defense and got a layup, righthanded? Wow.

Pounding The Rock: Noteworthy optimism | Bright Side Of The Sun: Throat-stepping time

Finally, a tip of the hat to Robert Sarver, owner of the Suns, as well as David Stern and Gregg Popovich...

"Our players and organization felt that wearing our 'Los Suns' jerseys on Cinco de Mayo was a way for our team and our organization to honor our Latino community and the diversity of our league, the State of Arizona, and our nation," Sarver said in a statement released by the team. "We are proud that 400 players from 36 countries compete in the NBA, and the league and the Suns have always considered that to be a great strength of the NBA.

"The frustration with the federal government's failure to deal with the issue of illegal immigration resulted in passage of a flawed state law. However intended, the result of passing this law is that our basic principles of equal rights and protection under the law are being called into question, and Arizona's already struggling economy will suffer even further setbacks at a time when the state can ill afford them."

"We think it's appropriate what the Suns are doing," NBA commisioner David Stern told NBA.com.

San Antonio coach Gregg Popovich would have gone with the "Los Spurs" jerseys if possible. The team only has one set of that uniform back in San Antonio, having sent the second back to the NBA. (Teams need two sets of uniforms for a game.) Popovich added that the Spurs had talked about addressing the immigration topic with Phoenix later in the series.

"It's a great idea," Popovich said. "I think that came from Mr. Sarver and it's a wonderful idea because it kind of shows what we all should be about. Sure there needs to be a lot of work done, obviously. A lot of administrations have done nothing about the immigration deal and now everybody is paying the price, especially a lot of people in Arizona.

"That's a bad thing, but the reaction is important, too. And this reaction, I agree with Mr. Sarver, is inappropriate. It's kind of like 9-11 comes and all of a sudden there's a Patriot Act, just a kneejerk sort of thing that changes our country and what we stand for. This law smacks of that to some degree, so I think what he's doing tomorrow night is very wise and very correct."

When was the last time you saw such a political statement made in sports?