RUMOR: The new Golden State Warriors logo looks like this...

GSoMer BritWarriorGSW revealed in his FanPost about his "Exclusive Evening with the Warriors" this past September that the Golden State Warriors would indeed be changing their logo/ jerseys for the upcoming 2010-2011 season. The new Warriors "look" is slated to officially drop during the 2010 NBA Draft on June 24, 2010. If you head over to Warriors.com or if you've received any of the Warriors mailings recently, it doesn't exactly take the services of Sherlock Holmes and Watson to figure out the coloring and lettering.

But what is the actual logo? 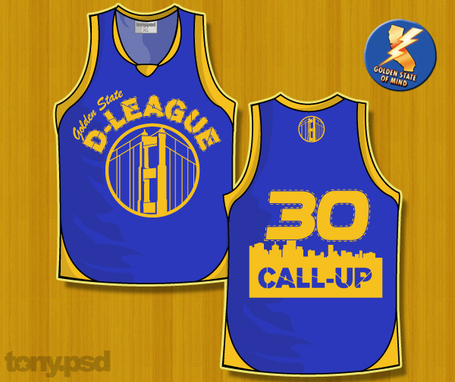 (This isn't it, but have a good laugh in Golden State Warriors to sport Alternate Golden State D-League Jerseys in 2010-2011)

There seem to be a bunch of leaks- see The Golden One's FanShot and GSoM friend KNBR's Damon Bruce just posted it on his Facebook page. (Add/ Like GSoM on Facebook).

Jump for a look at what is heavily rumored to be THE NEW GOLDEN STATE WARRIORS LOGO!