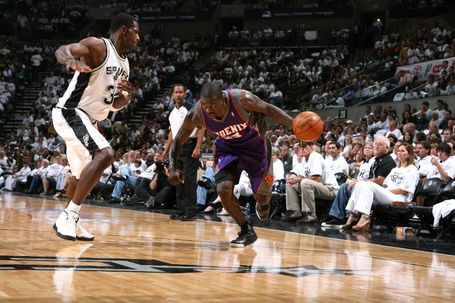 Take care of business, and JRich will go where he's never been before: WCF.

In yesterday's action, the Magic destroyed the Hawks, blah blah blah. And the Lakers wiped off the Jazz, blah blah - wait! Although the Lakers did beat the Jazz yesterday, the Lakers really had to earn that one, as the Jazz were merely INCHES away from a successful tip-in to beat the Lakers. And before that, there was the clutch shot after clutch shot from both teams to set up this game for the nail biter finish.

On this Mother's Day action, the early day game has the Celtics need to show that they can defend their home court and even this series up after that statement performance from LeBron James. Later in the late afternoon game, the Suns seek to close off the Spurs and finally beat them in the playoffs. 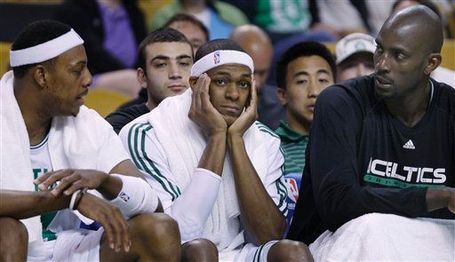 Those long faces will get longer if the Celtics don't show up today.

This is the only series in Round 2 that isn't at a decisive 3-0 standing. The Celtics blew out the Cavs in Game 2, though the Cavs did make a decent run in the 4th. But the Cavs completely obliterated the Celtics in Game 3 behind LeBron's my-elbow-is-fine performance, taking back home court advantage. I've heard that the Celtics have been inconsistent all season, and Game 3 showed it. Today we'll see if the Celtics show up and make this a series. If not, it will be a rematch of the Cavs and the Magic in the Eastern Conference Finals.

I guess Richard Jefferson didn't work out after all.

How disappointing it must be for the Spurs fans to see their team embarrassed on their home floor by some backup no name point guard named Goran Dragic and go down 0-3. Suns don't care. They know they need to close this series NOW and get plenty of time to rest for the Lakers. Warriors fans will be happy for JRich in making it to the Western Conference Finals.