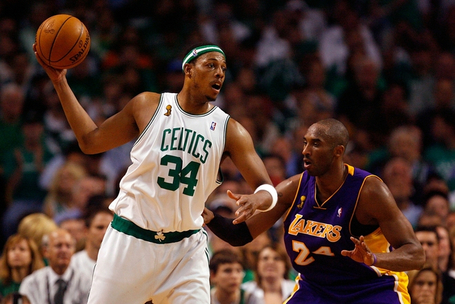 Two correct calls in the Conference Finals have got me back in the black for these playoffs, although it would have been better if I hadn't hedged my Celtics bet in the last game. C'est la vie, I think it was the right play, and in sports wagering as well as in poker, all you can do is make the right play. You can't control that river card.

Now what to do in these Finals? The pundits seem to agree that this time around the Lakers have what it takes to beat the Celtics. They point to the fact that the Lakers have added Andrew Bynum and Ron Artest to the core that faced the Celtics in 2008. They think Pau Gasol is now "tougher," and that the Lakers now "know what it takes" to win in the finals. They think the Celtics are going to miss a couple of key bench players from the 2008 Finals, Leon Powe and James Posey.

I'm not so sure. Jump for my opinion of the key factors in this series:

Phil Jackson: Yes, that's right, I believe the presence of Phil Jackson on the Lakers' bench is a reason to like the Celtics in this series. Because, come hell or high water, Phil Jackson will run the triangle. The slowest, most laborious, and to my mind, most ineffective offense in the league.

When I watched Kobe Bryant launch those ridiculous shots that clinched the Lakers' victory in game 6 against Phoenix, I didn't think to myself: "Boy, is that Kobe Bryant an amazing player!" What I was thinking was: "Is that the best shot that Phil Jackson's triangle can get for Kobe or Gasol against this porous Suns defense?"

Unfortunately for the Lakers, the answer to that is yes. And I don't need to tell you that the Celtics' defense is nothing like the Suns'.

After the game 6 victory against the Suns, Derek Fisher told the TNT crew that Kobe Bryant could easily average 40 points a game in a conventional NBA offense, "running pick and roll and things like that." I agree completely with Fisher's comment, but think it stopped short. He left out Pau Gasol.

Pau Gasol is one of the most gifted offensive big men this league has ever seen. With his mobility, ambidextrous shot-making, and terrific passing ability, Gasol would be absolutely devastating running pick and roll with Kobe Bryant. Unstoppable. He could quite conceivably get 30 points and 8 assists a game himself, to go with Kobe's 40.

But that's not how we are going to see Gasol used by Phil Jackson. On every possession, we are going to see Gasol furiously trying to post up with his back to the basket, expending his energy banging against Garnett, against Wallace, against Perkins, against Davis, right in the very teeth of the Celtics defense. Yes, the very same strategy that netted Gasol a grand total of 12 points a game -- and a completely undeserved label as "soft" -- in the previous series against the Celtics. It was horrible to watch in 2008, and it will be horrible to watch now. A terrible misuse of Gasol's talents. A crime against basketball.

But don't expect Phil Jackson to adjust, to suddenly switch to pick and roll. If he did that, he would no longer be Big Chief Triangle. 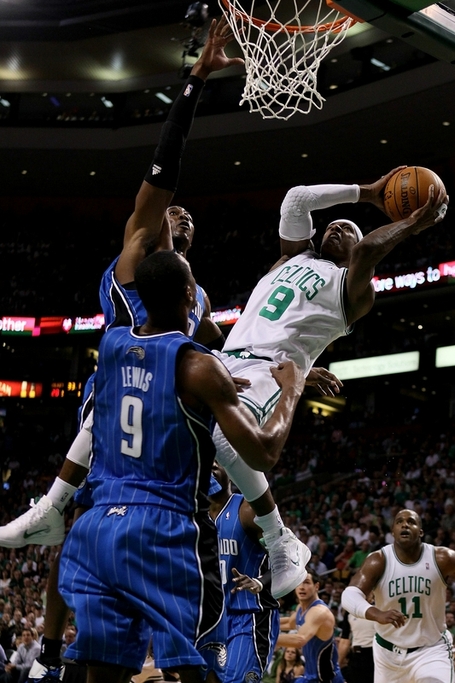 Ready to enter the pantheon?

Rajon Rondo: We've heard a lot about how Pau Gasol will be better this time around, now that he's had two years in the Lakers' system. Well, how about Rajon Rondo? Anyone think he's gotten better since he beat the Lakers as a rookie? And how about Derek Fisher? Is he better able to stop Rondo than he was two years ago?

The Celtics best player is their point guard, which just so happens to be the Lakers' Achilles heel.

Paul Pierce: My pick for the most underrated player of his generation, or perhaps any generation. It is astonishing to me how little credit Pierce gets for his performance against Kobe Bryant in the finals two years ago. He destroyed Kobe in that series. Held him to 41% shooting. Lit him up mercilessly on the other end.

Ate his heart. Made him quit.

The Lakers picked up Ron Artest this season, which means that Kobe will no longer have to guard Pierce. But that doesn't necessarily mean that Pierce will no longer be guarding Kobe. If Doc Rivers is smart, he will leave Pierce on Kobe, and cross-match Ray Allen on Artest.

Ray Allen: Kobe won't have this series off on defense just because he won't be guarding Pierce. He will be chasing Ray Allen around screens all game long.

The Lakers got away with not guarding JRich in the last series (except at crunch time). I don't think they can get away with leaving either Pierce or Allen unguarded. Which means Artest and Kobe will not be able to give help against Rondo and the Celtics' pick and roll. 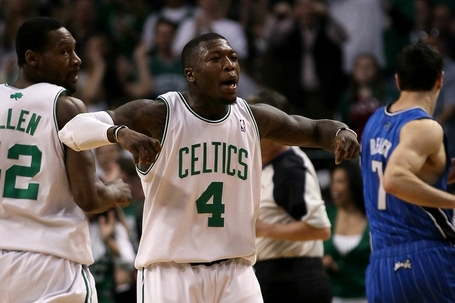 The Bench: I've seen some commentators give the edge to the Laker bench over the Celtic bench. Better than Rasheed Wallace, Big Baby Davis, Tony Allen and Nate Robinson? Hmmm. I think I'd have to disagree. Odom is the only player off the Lakers' bench that I like, and we already have seen him struggle against the length and heft of the Celtics.

Rasheed Wallace, if healthy, will be a very tough defender against Gasol. Tony Allen and Glen Davis are terrific defenders as well. And Nate Robinson? Fisher and Farmar can't guard him. He might very well be a difference-maker in this series.

Andrew Bynum: Bynum was unable to play due to injury in the 2008 finals. This time around he is also injured, but has been playing through it. Regardless of his effectiveness, his mere presence on the floor will be a huge boost to the Lakers' frontline. Gasol and Odom will have to do far less banging against Perkins and Davis, and thus will be far fresher, and less prone to foul trouble, than in the last series.

Now that we're in the finals, I look for Bynum to do something in this series that he hasn't done so far in these playoffs: give everything he has. We've already seen signs that he intends to do that. He's gotten his knee drained, and gone to a less restrictive knee brace. 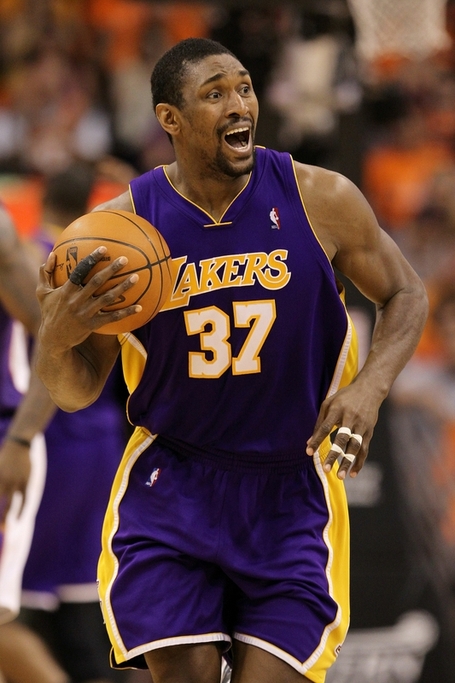 Ron Artest: See Paul Pierce, above. Artest did a great job shutting down Kevin Durant earlier in these playoffs, and he will be given the same task against Pierce. Even if he's successful, I'm not sure how much this will bother the Celtics. Unlike Kobe, Pierce has no problem playing second fiddle on offense in pursuit of the championship. His series against Lebron and the Cavs was evidence of that. If Artest is denying his shot, Pierce won't force, he will work to set up his teammates, at which he is very underrated.

Age and injuries: Several of the Celtics, including Rajon Rondo (bad back), Big Baby Davis (ringing ears and missing teeth) and Rasheed Wallace (bad back), got beat up in the last series; we also saw signs that Kevin Garnett and Kendrick Perkins (bad knees both) were getting worn down. It is not unlikely that the Celtics' injury problems will decide this series. Can Garnett go the distance?

How to Play It:

Unlike the last time these two teams met in the finals, there seems to me to be very little edge in the series line. It reflects two very closely-matched teams, with the difference in the price being the Lakers' homecourt advantage. I don't see a good reason to bet against this line.

If I did, though, this is how I would play it: If I liked the Lakers, I would go ahead and bet the series line, laying the -180. But if I liked the Celtics, I don't think I would take the +160 on the series. Even if the Celtics are the better team at the beginning of the series, there is a considerable risk that some of their key players may break down before the series is over. So why not look at the game lines in games 1 and 2 (currently +5.5 in game 1) instead? If the Celtics are to win the series, they need to win a game in LA. And if they're the best team, it is likely that they will win one of the first two games.