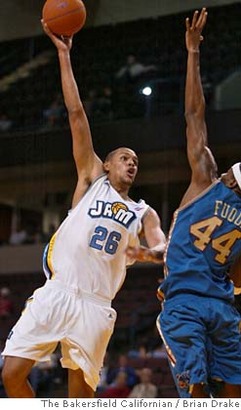 (Will this be the fate of the Warriors' #6 pick this year?)

Is it sad to say that the greatest "big man" in Warriors history might be Tyrone Hill?

Tyrone Hill, the final lottery pick of the 1990 draft, only played three seasons with the Warriors and went on to have a productive career epitomized by his one all-star appearance in 1995.

The development and production of the latter three -- Biedrins, Wright, and Randolph -- have had an polarizing effect on Warriors fans, who either think that they should be ready made by now or are All-Stars-to-be if they could just get more playing time or stay healthy. Given the volatile landscape that is the Warriors front office and coaching staff -- what I would call the basketball equivalent of the movie "2012" -- what is the fate of the Warriors #6 pick if they were to grab a big man? What do we make about the kryptonite-ish effect the Warriors have on big men?

Here at Golden State of Mind, we debated about the return and future of Brandan Wright, a former lottery pick who the Warriors have continued to financially invest in despite all his injuries, bringing up the idea that Don Nelson is just not able to develop big men. It is difficult to blame Nelson for Wright's injuries, but is there some truth to the idea that the coaches and the Warriors team in general lacks the proper "culture" to develop big men?

There's a stereotype about big men as having personality issues such as laziness, arrogance, and not even enjoying the game of basketball. That is, they just sort of fell into the game and career of basketball. By their body language on and off the court and their work-ethic, you would think they were being socially oppressed by their size, forced into the stardom like teen-stars. Their failures as comparably tragic.

Several of the college players who are entering this years NBA draft have been marked by these labels. Worse yet, they've also been described as projects.

Players like Los Angeles Lakers Andrew Bynum and New York Knicks Eddy Curry, however, seem to be possible examples of how the "culture" of teams can largely shape the long-term careers of talented yet troubled big men. Bynum, who many have already dubbed the next "Joe Barely Cares" for his seemingly nonchalant attitude to the game, has thrived when healthy with the Lakers. When healthy and willing, Bynum dominates with an array of jump hooks and fade away jump shots so smooth you would think you were watching big men of the 70s and 80s, who used finesse more than power. His recent attempt to get some minutes in during the finals series in spite of the swelling in his knee has shown that he has more heart than advertised by critics.

But to what extent do we take into account the structure that Bynum has been groomed in? With Kareem Abdul Jabbar as his personal big man coach, Phil Jackson at the helm, and Kobe Bryant to throw towels at him if and when he messes up, that's pretty good company (and a whole lot of wins) to help discipline and convince you to be a winner. There's no statistical evidence that I could crunch that could show how having hall-of-famers grooming you will necessarily translate into wins and better skills. But it is hard to deny that having someone like Kobe getting into your a$ about miscues and Jackson's holistic, if not spiritual, approach to the game can make a player want to eat, sleep, and breathe basketball greatness.

Eddy Curry seems to have lacked all of this. Akin to giving a teenager the keys to the Bentley at too young of an age, Eddy Curry and fellow teenager Tyson Chandler were propped up by the Chicago Bull franchise as the faces of the future, probably more as a temporary publicity stunt than anything else. The Bulls, much like the Warriors of the last decade-plus, had a revolving door of coaches and a roster full of young underachieving players. Once called "Baby Shaq," Curry has had some productive seasons. But he has also battled through a lot during his short career, including weight issues, financial problems, and tragedies with his family. Granted not all of this is his fault, but Curry has been a player that has seemed to disavow discipline and defense. You could argue that it wasn't until New York Knicks coach Mike D'Antoni came along where Curry beagn to take his conditioning seriously, which sadly has ended in failure so far as his body the last few seasons couldn't keep up with his comeback work-out regiment. Curry hasn't had the privilege of having a stable system around him like Bynum and you wonder what Curry's present and future might look like if he did. Would Curry have lived up to his nick name "Baby Shaq" for the right reasons (not the fluctuating weight problems)?

As the Warriors look towards some big men to possibly snag at the number 6 pick, you wonder if they necessarily have the infrastructure to develop their big men to be well-rounded players. Is Don Nelson really able to develop big men? Do they really figure largely into Nelson's offensive schemes? Do the Warriors really have a winner, like Kobe, to put a lazy player in check? If Bynum has Kareem, who do the Warriors have? Is it time to bring someone in to help Biedrins on his touch? Or to help Anthony Randolph, Mr. Two-Left-Feet, to work on his balance and footwork?  Don Nelson proposing to Biedrins that Rick Barry should teach him how to shoot free-throws is not enough, in my opinion.

Given the situation with the Warriors -- new ownership, Nelson's coaching career possibly coming to an end in the near future -- perhaps the Warriors should steer clear of snagging a project.