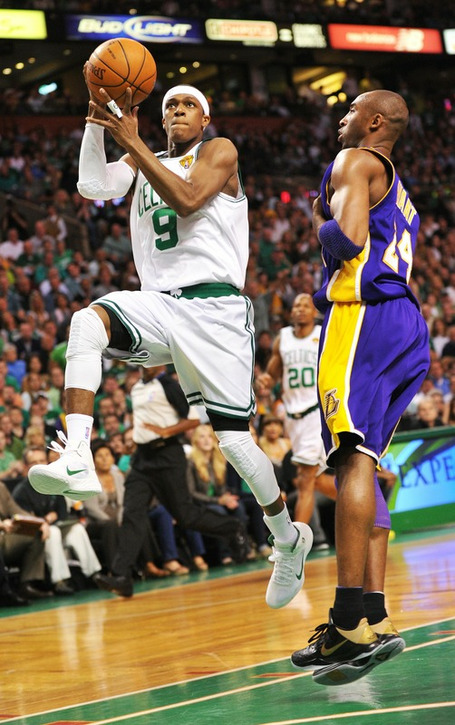 Nothing at stake but immortality.

Home: Los Angeles Lakers (Silver Screen and Roll)
Away: Boston Celtics (Celtics Blog)
Series: Celtics lead 3-2
Time: 6:00PM PST
TV: ABC
Who is not loving this series? This is shaping up as one of the greatest Finals battles in history. As the series heads back to LA with the Lakers down 3-2 and their backs to the wall, there are almost too many great matchups, and too many great storylines to count. Almost.
Jump for game 6 matchup madness!

Rajon Rondo v. Kobe Bryant: The Lakers unveiled the biggest surprise of the series in game 1, when they guarded Rondo with Bryant. Since that moment Rondo has played like the Karate Kid: he's waxed on, and he's waxed off.

And most importantly, he needs to beat him on the greatness meter.

Kobe v. Pau Gasol: After witnessing Kobe's third quarter performance in game 5, the great T.J. Simers of the LA Times has taken to calling Kobe "Our Ball Hog." Check it out. The bottom line is that if you enjoyed that performance, as amazing as it was, then you hate basketball. It was perhaps the most selfish display I have ever witnessed on the Finals stage. Bryant openly disrespected his teammates, as well as his coaches, and the useless energy he expended and the lack of confidence he bred in his team led directly to the Lakers' loss.

Kobe has pointedly refused to get the ball to Pau Gasol in scoring position for several games now. It has made me wonder, as I have frequently wondered over the years, whether Kobe would rather lose than let a teammate outshine him. In this series, I think we're going to find out.

Phil Jackson v. Big Chief Triangle: After watching game 1, I thought the lightbulb had gone on for Phil Jackson. I saw Kobe Bryant running pick and roll with Pau Gasol, and it led to a beautiful and ruthlessly efficient Lakers' attack. Since that time, Kobe has gone into hero mode, the pick and roll has disappeared, and the gears of the Lakers' triangle offense have ground to a sickening halt.

Phil Jackson needs to grab Kobe by the ears and give him a good shake. But is that the Lakota way? 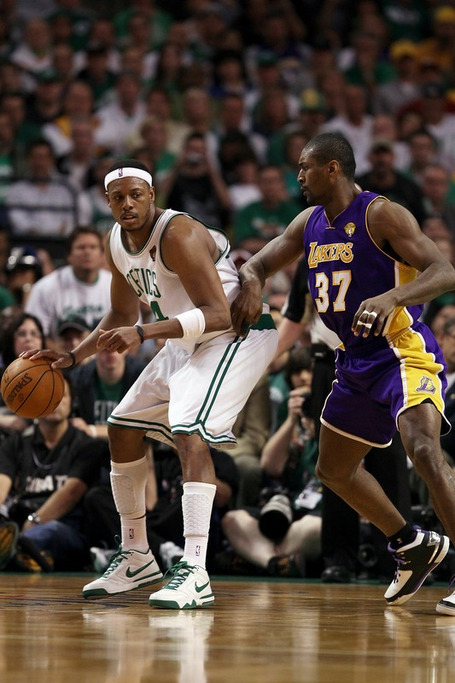 Paul Pierce v. Ron Artest: Pierce was content to be quiet in the opening games of this series, and move the ball to the open man. And then Artest opened his mouth. Has the 2008 Finals MVP awoken? 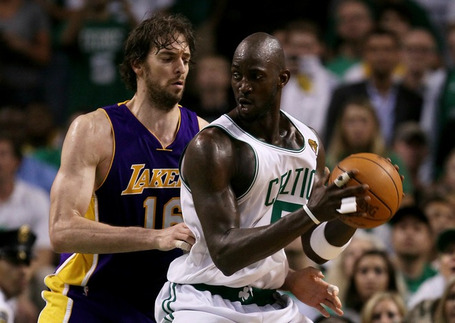 Kevin Garnett v. Pau Gasol: Garnett looked like a mere shadow of himself as this series opened. And then Gasol opened his mouth.

Gasol has the edge in health and game. But the deciding edge could be this: the Celtics actually get Garnett the ball. 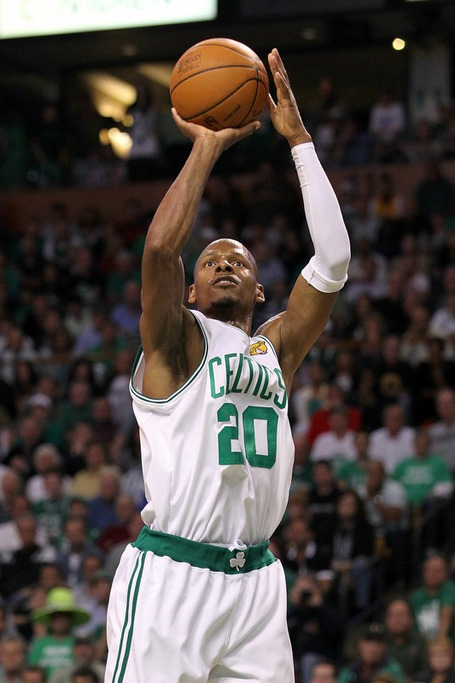 On his last leg?

Ray Allen v. His Quadricep: Allen broke the Finals record for three pointers in game 2, with eight. In game 3, Ron Artest gave him an "accidental" charley horse that would have ripped the leg off a mortal man. Ray Allen is no mere mortal, but since that time he has gone 0-18 from three. Oh for eighteen!???

Allen has continued to play fantastic defense on Kobe Bryant. And he's found other ways to contribute on offense. He is already a quiet unspoken hero of these finals. But to get the Celtics over the top, he'll have to hit another three.

Garnett's knees v. Andrew Bynum's knees: Bynum was stellar in LA, but plagued by swelling and pain in Boston. For Garnett, it was the opposite. Which raises an ancient NBA question: Why is it that knees hurt more on the road than at home?

Kendrick Perkins and Rasheed Wallace v. The Zebras: They are both one tech away from bye-bye. And they will be tested.

Ron Artest v. The Heebie Jeebies: Y'all know what I mean. 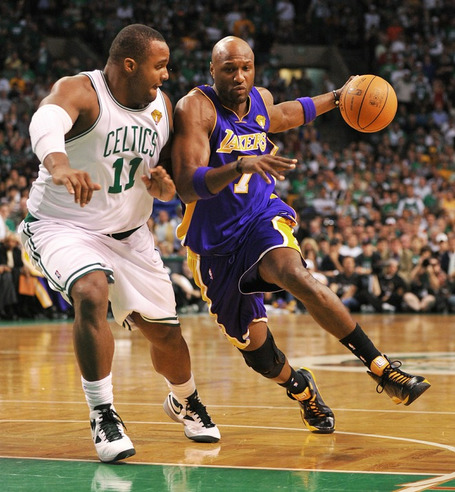 Battle of the Cartoon Characters.

Shrek and Donkey v. The Kardashian Krew: The Celtics bench have pwned their Lakers' counterparts in this series. Nate Robinson and Big Baby Davis have seized the spotlight and become bigger than life, and in the process given themselves nicknames that will stick for as long as they remain Celtics. Tony Allen is playing superb defense on Kobe. And Rasheed Wallace always shows up big in big games. You know he will hit that three. 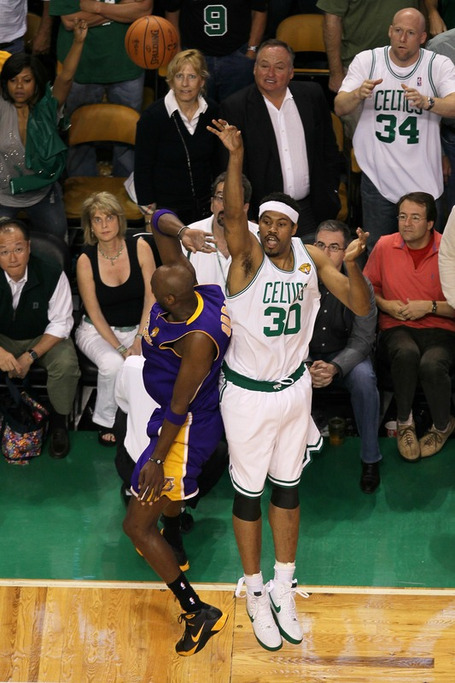 As for the Lakers' bench: Mr. Kardashian has disappeared under Big Baby's onslaught, and been reduced to mumbling about reality television profits (yes, I'm serious). His Krew has been worse. Farmar, Vujacic and Walton are seriously outclassed, and Shannon Brown appears to have completely lost Phil Jackson's confidence, if not his own. 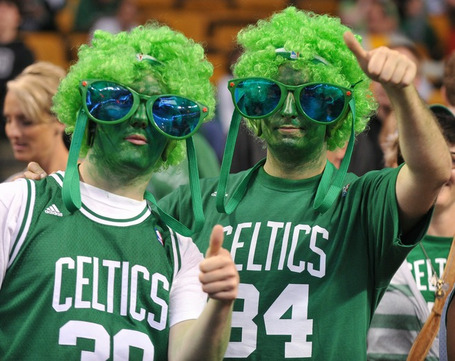 Lakers fans v. Celtics fans: Can the Lakers fans come up with a free throw chant to match the gem the Celtics' fans tossed at Mr. Kardashian?

Nah, of course they can't. They're Lakers fans. And that may well have been the greatest chant of all time.

Feltbot v. The Bookies: This match-up is over for the season. The Lakers are -6.5 favorites, and I have no idea.

But like any self-respecting Warriors fan -- and any fan of all that is right and good about California -- I'm rooting like hell for the Celtics.