Share All sharing options for: Golden State Warriors Logo Gets Updated for La-La-Land

The classic "The City" logo that the Warriors recently updated and unveiled has found a new home in a place you least expect it:

Should Warrior fans be worried?

The Warriors have not given much to the NBA in the last 20-30 years.  But the Warriors "The City" logo may be the greatest gift to hip-hop fashion than anything else any NBA team has ever inspired (san Michael Jordan's "Air Jordan" Line).  The colors and concept are timeless and apparently adaptable to any place or location. Villainy, an urban wear brand that emphasis what looks to be southern California style (v-necks and lots of shirts with huge words printed on them), gives "The City" logo a new twist: 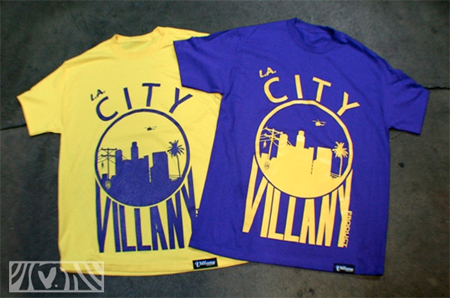 I don't know how Bay Area natives would feel about LA swagger-jackin' the iconic style of bay area hoops if not THE emblem that easily identifies the "heart" of the bay area, what once was the bridge linking major hubs of Bay Area culture now the cityscape of downtown LA.  Rivalries never die (as the NBA finals is clearly indicative of) but I might shell out the twenty five bucks to pick this up until the Warriors come out with some actual wearable team gear that doesn't make you feel like you found bootleg sportswear in a Chinatown gift shop or Ross.

Would you cop this Golden State Warriors inspired gear?