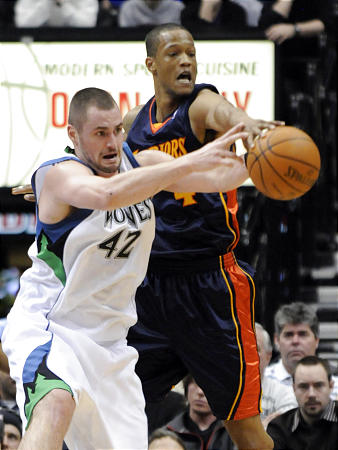 Which forward would you rather have... going forward?

GSoM friend Tim Kawakami breaks it down in Warriors and Minnesota cool off Randolph trade talks.

I found this part this the most interesting:

But one source said that Warriors GM Larry Riley is telling the truth about being inundated with is-Randolph-available? calls from other teams once word broke about the talks with Minnesota.

I really wonder how many of these other NBA front offices have actually seen Randolph play. I seriously wonder if they're basing their thoughts on his game solely on the absurd media over-hype of his game. I really hope Randolph gets there (meaning a starting caliber NBA player), but right now he has a long, long, long way to go before he reaches that level. His hoops IQ, build, and fundamentals are lacking like former Warrior "fan favorite" Mike Dunleavy in the playoffs.

But back to the Randolph vs Love topic. Count me in the camp that would more than happy to swap Randolph for Love. Just imagine what the Dubs could do with Love's exceptional rebounding and hoops IQ. Hoops junkies already salivate over this guy's outlet passes, but if he was playing Nellieball? Can you imagine Love grabbing the rebound and QBing a pass down court to a fast-breaking Monta Ellis or Stephen Curry? I'll take that over a wild rebound followed by a sioppy attempt to push the ball up court and then a haphazard wild jumper. (Again MONTA ELLIS of all people was screaming at this guy for making mistakes on the court last season- take that however you want.) There's even the possibility of a nice screen and jumper 4-1 play between Love and Curry like Chris Webber and Mike Bibby during the Sacramento Kings' (unfortunately) short-lived golden age. I'll take that over some ridiculous forced shot attempt any day.

Would you be up for sending the T-Wolves Randolph for Love? Think Randolph will ever be a solid starter in this league?

Thanks for GSoM community member dubzfan for posting this in a Fanshot.