Ekpe Udoh: Did Don Nelson Get the Player He Wanted?

Share All sharing options for: Ekpe Udoh: Did Don Nelson Get the Player He Wanted? 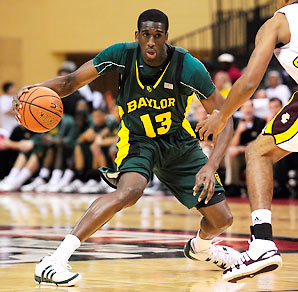 Don't answer until you check out this profile of Udoh. I note several characteristics of a quintessential Don Nelson player. First of all, "he has an incredible basketball intelligence." Secondly, he has a love of doing the dirty work, which is something Nellie desperately wants from his four, and which has been sadly lacking in both Brandan Wright and Anthony Randolph. Third, he has versatility, or as Nellie puts it, the ability to do more than one thing well.

Jump for the full Nightmare!

Udoh has the beef, at a full 40 lbs. over what BWright and Randolph weighed coming into the league. They were 200 dripping wet. He's 240. Udoh plays above the rim. He loves to defend and rebound and block shots. He has a 7'5" wingspan.

On offense, he has some low post moves (say what?!!). He shoots the jumper out to at least the college three point line. He handles well, and can face up and beat his man off the dribble. He runs the court.

And he's "an underrated passer." Baylor played him at point forward, for heaven's sake:

Drew had used a three- or four-guard, dribble-drive attack the past few seasons but now often circulates the ball through Udoh in the post, where he has terrific awareness and passing skills. "Defenses have to be honest with Ekpe, which opens up driving lanes," Morefield says. When Sam Houston State came out in a triangle-and-two to lock down the Bears' backcourt of Tweety Carter and LaceDarius Dunn, Udoh shifted to point forward and scored 20 points while handing out five assists and grabbing 13 rebounds.

Did I mention that "he has an incredible basketball intelligence?"

I've never seen him play, but I have to say that Udoh sounds like a Don Nelson wet dream.

I have a funny feeling brewing. A sneaking suspicion...

That The Nightmare has already beaten out Brandan Wright and Anthony Randolph.