Doctor Strangepick or: How I Learned to Stop Griping and at Least Not Hate Drafting Ekpe Udoh

Share All sharing options for: Doctor Strangepick or: How I Learned to Stop Griping and at Least Not Hate Drafting Ekpe Udoh

I won’t pretend that I’m all that different from the bulk of you who look at selecting Ekpe Udoh as something between a puzzle and a failure.  I won’t pretend that this isn’t yet another piece of evidence that Larry Riley should look for other employment.  I *can’t* pretend I’m excited by this year’s draft.  I’m not.

In fairness, it’s not as though Ekpe is certainly destined to disappoint.  This isn’t the Fuller pick.

But it still sits wrong.  In fact, I’m probably more underwhelmed than I have been with any pick since Todd Failure heard his named called, a case where there was virtually no chance that the pick would pan out as anything worthwhile.  This is not that sort of pick, but I’m still underwhelmed.  I won’t pretend that those feelings are all gone.  But on closer inspection, I’ve found a way to squeeze some sense into the pick.  I’ve found cause to couple this into the hope that keeps a Warriors fan a Warriors fan.  Follow the jump to find out why.

I’m underwhelmed because it’s just hard to let this pick catch one’s imagination. When our Warriors picked the POB, I knew it was a foolish "need" pick and was sure that he was destined to do nothing.  But somehow it wasn’t as initially deflating.  Perhaps, even knowing better as I should, some part of me still holds that glimmer hope that a "true 7 footer" will solidify the center position, something that most teams almost always need.  When ’s name was called, I similarly thought that we were more than likely seeing a bust. Nothing he’d done in college or high school suggested that he’d boost the team.  But his combination of size and athleticism was tantalizing. He was young, still brimming with ‘potential’ as a result, and at the tail end of the lottery, with sure things gone and in a spot where picks are as likely to be practice fodder and garbage time filler as they are contributors, it was a defensible move that could generate real excitement.  [I have been pleasantly surprised by , even if he is still far from a sure thing and remains a ‘work in progress’.]

Drafting Udoh trumped the underwhelming feel that came with either of these picks.  Both the POB and Randolph were taken later in the draft.  Both had at least a glimmer of appeal.  I have had a hard time getting past ‘disparaged’ this time. It didn’t seem to make sense. It didn’t spark visions of ‘potential’ and ‘upside’. It wasn’t exciting.  I immediately longed for the 2011 draft to find a new place to hang my hopes.

But with despair having run its course, a cooler head has me thinking about how and why this pick makes sense

At 23, Udoh will be much closer to his prime than the younger players.  We’ll know what we have in him much, much sooner than with a 20 year-old with "upside".  If he turns out to be a useful player, and in this particular draft a useful player from the slot we picked should be considered a success, he’ll be on the rookie scale for the whole of his peak.  No, it’s unlikely that he’ll become a star, and that’s the sort of thing that you can dream of with the youngsters, but if you’re investing 4 years in the 19 year old with only marginal contribution in those years anyhow, by the time the kid is up for his new contract, you’re lucky if you really know that he’ll be worth the further, likely much, much larger investment that it will take to keep him around.  You could just as likely wind up going into contract negotiations still weighing "potential".  In essence, the gigantic contracts that some rookies used to command before ever stepping foot on the court that eventually led to the rookie scale have been pushed out for 5th year players.  While there’s time in the NBA to better evaluate, there’s not much evidence that management has learned the lesson.  They still pay for bad gambles.  Now they do it with evidence from a few years’ play in the league that really *should* make them know better.

As a value proposition, Udoh may make more sense than the younger players.  While there is little chance of a homerun with Udoh, there is far less chance that you’ll pay $10+mil to watch a guy continue to strike out, hoping that the pretty (but ultimately unsuccessful) swing will eventually turn into a parade of home runs.  Marginally (in)-competent bigs tend to be costly.  Finding a reliable front court contributor to come in and do dirty work with even marginal success is tough, even when you wave around a full MLE.  If Udoh manages to fill that role, it’s not a failure of a pick.  Obviously, you can’t expect to go tremendously far with a team constructed entirely of value propositions (although last year’s Rockets suggest it’s quite a bit further than conventional wisdom would tell us) but you’re not likely to go far taking long-shot bet after long-shot bet, especially when you start to pay them like they’re sure things.  Given that the picks later were not just long-shots, but long shots that didn’t look like home-runs if by chance they panned out, taking a value proposition seems far more palatable.

Udoh was not drafted for his ability to put the ball in the basket. A post player who cannot connect on 50% of his shots in college is a bit of a concern. And while he was a good college rebounder, he certainly wasn’t a vacuum cleaner.  It remains to be seen if he can be effective on the glass against professionals.  To believe the scouting reports and a rather impressive blocked shot total that came without a tendency to commit fouls, Udoh is being brought in for his defense.

Defense is half the game.  Players, coaches and execs pay lip service to this all the time, though when it comes contract time, defense is an afterthought, falling far, far short of points per game in deciding who gets paid what.  GMs will open up an owner’s checkbook for a guy who puts points on the scoreboard, even if he allows more than he scores (and prevents teammates from scoring by firing up an inordinate number of shots to get those points).  It’s the rare player to parlays defensive work into a payday.  But defense is more than just lip service in terms of real impact on wins and losses.  Empirical evidence indicates that a team’s defensive performance has as much impact on the final score as the team’s offensive performance.  While just acquiring individual defenders is no guarantee that of a revolution in a team’s defensive performance, it can help.  This has certainly been true with Don Nelson.  He’s had good defensive teams in the past, but only when he had good individual defenders going on and doing their job.  Leave him with guys who don’t show up on that end of the court and his teams do poorly on defense.  And from the perspective of team defense, that case where 5 guys working together being more than the sum of their parts, this sends a signal that defense is something valued, something important and something that won’t be ignored.  At some tipping point, putting enough guys on the court who care makes the rest of the team try that much harder. Is Udoh such a player?  That remains to be seen.  Normally, I find analogies to other players to be rather ridiculous.  The "NBA comparisons" on draft sites favor superficial similarities (talk/short, fat/thin, white/black, same would-be-alma-mater-if-the-guys-actually-graduated) that mean far less in terms of actual impact on the game.  But if it’s true that he can guard multiple positions, he could fall into the mold of George Lynch or Shane Battier. 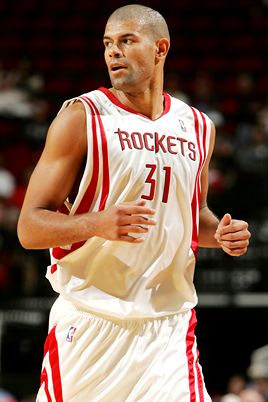 Battier at #6 didn't excite many, but there is a reason he's won more often than he's lost.

Battier was more heralded in college, winning the Naismith award (though largely because he got more exposure going to Dook).  Battier has never looked particularly impressive on an NBA court, but when he’s consistently made the teams he’s joined better when he’s played than they were without him.  At some point, that has to stop looking like coincidence.  Battier has the ability to match up in the front court and on the wings, making it that much more difficult to isolate and exploit his teams.  Lynch similarly made a living by closing in on traps and by making sure that when he found himself switched on D, an easy basket was far from a foregone conclusion.  Though conventional wisdom rarely rewards him, he found himself playing substantial roles on winning teams.  Closer to home, the last time the Warriors had a guy who presented similar defensive versatility was when Stephen Jackson was here (and cared, a venn set that unfortunately did not completely overlap).  It was also the last time that the team played anything that resembled effective defense. 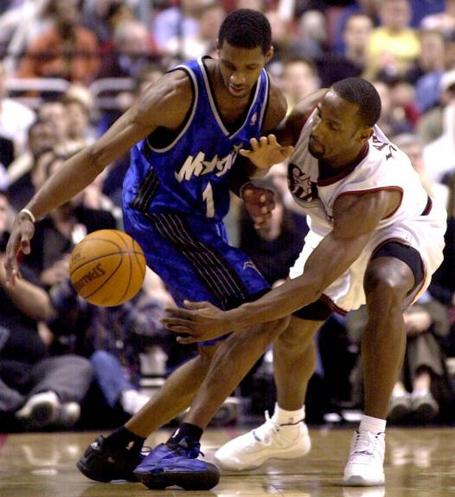 George Lynch quietly made life difficult for anyone he was tasked with guarding.

Neither nor Battier have been tasked with stopping opposing 4s and 5s as their primary mission. (However, while listed a couple of inches shorter than Udoh, Battier was only a half an inch shorter at the combine.)  Lynch gave up enough inches that you’d rather his exposure to another team’s center be limited.  Udoh projects to be someone expected to give opposing big men trouble and block shots when guards dare to enter the pain. Being able to take on the tough assignment at a number of positions can better hide the individual shortcomings of guys like Biedrins or Randolph who, while effective on the glass, have trouble in isolation against a big with any sort of offensive game. His versatility comes from taking the tough big man and putting up a reasonable fight when drawn out and switched onto the opposition’s 3.  We haven’t seen this in a while, but it’s far from crazy and it just might work!

Are you convinced now?