The Golden State Warriors selected Ekpe Udoh out of Baylor with the 6th pick in the 2010 NBA Draft and the reviews are in. 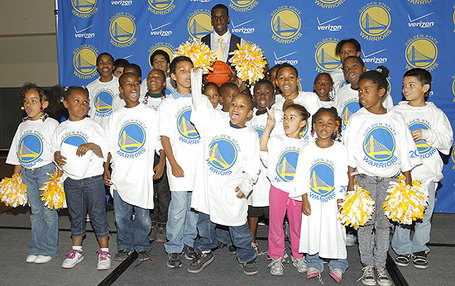 As The Game and 50 Cent would say, people either "Hate It or Love It". Jump to see what I mean!

Golden State Warriors: Ekpe Udoh (6). Udoh is a fine prospect whose shot-blocking prowess should carry over to the pros. But he's already 23 years old and Golden State passed on Greg Monroe, whose preternatural playmaking ability would've seemed a natural fit for Don Nelson's offense, and Al-Farouq Aminu, who, though raw, has nearly as much upside as anyone in the draft

Draft Grade: "One Headlight" - The Wallflowers

Udoh is a lot like the 1996 track in that it isn't going to blow you away upon first listen. But then you'll catch yourself thinking about it later, think of it when you're going to sleep, think of it when you're supposed to be paying attention at a meeting. Then you'll start planning the next time you're going to listen to it. And all of a sudden he's your 6th pick in the draft and you're giving up on Brandan Wright and building a defense around it. A lot like that.

ESPN.com- Chad Ford: Draft Grades: How all 30 teams did

I like Ekpe Udoh and so do a lot of NBA scouts and general managers. But taking him at No. 6 seems like a major reach, especially when you consider the Warriors' current roster. In previous years, the Warriors have selected Brandan Wright and Anthony Randolph in the lottery -- and both are thin, athletic players like Udoh who can rebound and run the floor.

Udoh may be more polished than Wright and Randolph. He's an accomplished shot-blocker and rebounder, and he has a more sophisticated offensive game. But he's also already 23 years old, while Wright is just 22 and Randolph is only 20. Given all that, and given the uncertainty in the Warriors organization, Udoh looks like a classic candidate to disappoint.

5:07: Golden State grabs Baylor shot-blocker Ekpe Udoh. It's going to be fun when Don Nelson plays him for three weeks, Udoh puts up huge rebounding/blocks stats, there's a fantasy hoops stampede for him and then Nellie inexplicably benches him for the next three months.

Ekpe Udoh is a 6-foot-10, 240-pound pseudo-center who isn't especially tough and isn't especially strong. The Warriors have plenty of those with Anthony Randolph, Brandan Wright and Andris Biedrins on the roster. Udoh possesses some offensive moves (he averaged 13.9 points last season at Baylor) and has a decent touch from the perimeter. But a more traditional big man like Greg Monroe might have been a better fit.

The Warriors took Ekpe Udoh with the No. 6 pick, which isn't terribly great value; he could have slipped beyond the No. 12 pick had the Warriors not taken him. The team traded away its No. 44 pick, which it had traded down to from No. 34 earlier in the week. Apparently, the team thinks it can get whatever low-level prospects it wants from the NBA D-League. It worked last year.

Fox Sports: Handing out grades for the 2010 NBA Draft / NBADraft.net

The draft's biggest riser, Udoh simply is not good enough to be drafted No. 6 overall. He's awkward and not particularly skilled, but tested out well in workouts thanks to his length and good matchups - he told NBADraft.net he was most often paired with centers Cole Aldrich and Hassan Whiteside instead of power forwards. In addition, the Warriors have a pair of young, athletic forwards in Anthony Randolph and Brandan Wright, both of whom have more potential than Udoh should they ever stay healthy. To sum it up, the Warriors took the 20th-best player in the draft with the sixth pick. The only saving grace was they didn't have a second-round pick to mess up.

With Anthony Randolph, Brandan Wright and Udoh, the Warriors have taken the power out of the power forward position. 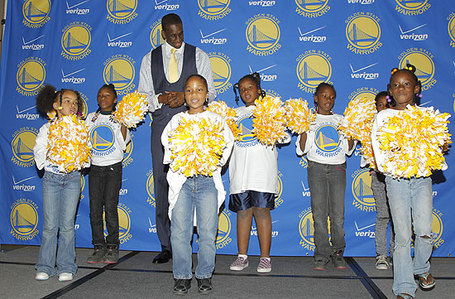 The draft pundits might not be cheering, but at least these guys are.

These folks seem to really love the pick:

"I think he will flourish in the Golden State situation." -- Steve Smith

"The Warriors actually went a little defensive with this pick- I can't believe it!" -- Rick Kamla

Ekpe on the Mic

You know you've made it big when Craig Sager and his "interesting fashion sense" are interviewing you. 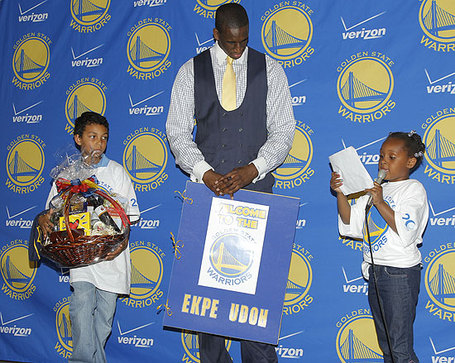 WHOA! The next Franco Finn!

Yet another awkward press conference brought to you by the Golden State Warriors.

First thing's first, there's the age issue. Udoh is 23 years old. That makes him about 3 years older than Anthony Randolph, a year older than Brandan Wright, and only a year younger than Andris Biedrins. A lot of people are knocking the pick based on age alone, but as my man JAE has astutely noted older isn't always a negative.

I'll also take you back to when Nellie and the Mavericks selected Josh Howard in the 2004 NBA Draft after he completed his senior year at Wake Forest. Straight from Wikipedia:

Coming into the league, Howard was projected as a mid to late 1st round pick in the 2003 NBA Draft because of his apparent lack of upside.

Howard was drafted with the 29th selection in the first round by the Dallas Mavericks. He started his career coming off the bench until he caught a break in 2004. Howard won his spot in the lineup after Marquis Daniels became injured. Consistent performances by Howard have led him to becoming an integral part of the Mavericks, leading them in several games. Howard's defensive ability has led him to feature on a defensive team in college, and a call up to the United States national basketball team. Howard's performances also helped him become an All-Star in 2007.

I'm not saying it will happen, but I'm perfectly fine with that type of trajectory. Josh Howard was (and possibly still is) a very, very good basketball player and the Mavericks didn't have to wait for him to develop.

I won't front like some of these draft "pundits". Aside from some YouTube clips (which can make guys like Kosta Perovic look studly) I have never actually seen Ekpe Udoh play an entire game of basketball.

Having said (and admitted) that, I think it's critical to contextualize this pick. It really seems like this was a 5 player draft. The Warriors didn't get any favors in the 2010 NBA Draft Lottery (although I think it's foolish to blame those last season wins- those good old Golden State D-Leaguers were giving it their all- do you really want to be the person to tell them to tank it? See Golden State of Heart). Beyond John Wall, Evan Turner, Derrick Favors, Wesley Johnson, and DeMarcus Cousins, you're just left with the rest. In other words is there really that much of a difference between Udoh, Greg Monroe, and Al Farouq Aminu? I doubt it, but we shall see.

Going into the draft I was hoping Cousins would fall and if he didn't the Warriors would take Hoyas big man Greg Monroe. It's a moot point since Cousins went one pick before the Warriors got a chance, but I'll admit I'm a little happy we won't have to hear about his "coachability issues" next season. Anthony Randolph and Monta Ellis are enough to handle and we just got over the Stephen Jackson aka Captain Fraud drama. As for Monroe, I'm a sucker for passing big man (dreaming of Vlade Divac or Chris Webber in the high/ low post), but word around The Town is the Georgetown big man had a spectacularly unimpressive workout for the Warriors and got played to a standstill by St. Mary's big man Omar Samhan. That's a BIG red flag. Going forward, it really seems like GM Larry Riley's proclamation that Monroe was the best passer in the college basketball was a smokescreen to entice the Kings to take Monroe and let Cousins slip past them. It didn't work obviously, but I give him credit for trying.

Most importantly, let's not forget that the Warriors surrendered the most points per game in the association last season. Defense is half the game and the Warriors are absolutely horrible at that side of the game. Although Coach Don Nelson has had some good defensive squads in the past, this latest incarnation of the Warriors have ZERO claim to playing good D. A large part of that comes down to individual defenders. Look up and down this roster. Aside from Stephen Curry, Ronny Turiaf (who simply isn't a good NBA player), and call-ups Anthony Tolliver and Chris Hunter, I have a hard time believing that any of these guys are even mentally committed or willing to playing good D. The Warriors desperately need a guy that is, especially down low. They need someone to give opposing offenses nightmares.

Will Udoh bring it on D and contribute enough on offense in the next year or two to make an impact?

I honestly have no idea, but I sure hope so. I'd love nothing more than for Udoh (who seems like a good guy), Riley (who also comes across as a nice and smart guy who is left to clean Chris Cohan, Robert Rowell and Chris Mullin's mess), and the Warriors (who doesn't root for them?) to prove EVERYONE wrong... including me. 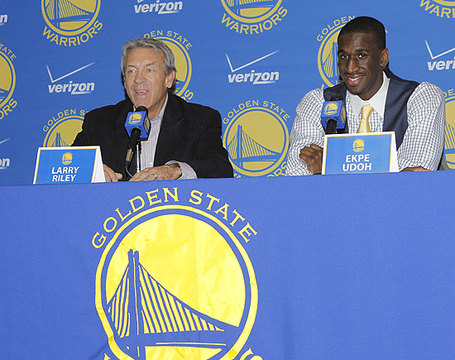 Prove them wrong guys. Show them how we do it. 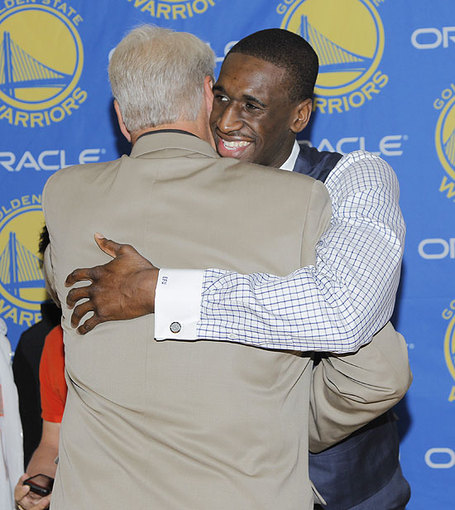 Here's hoping this works out. 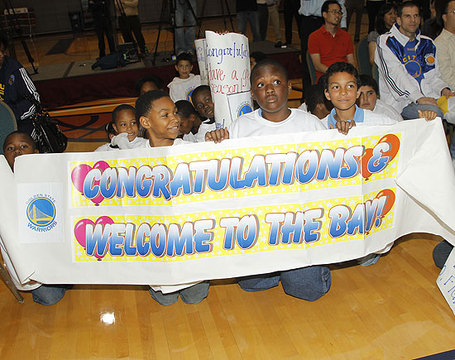