The Golden State Warriors new logo and colors have now been officially released (check out Warriors.com), but for some reason the team didn't release their actual jerseys as expected on draft day 2010. 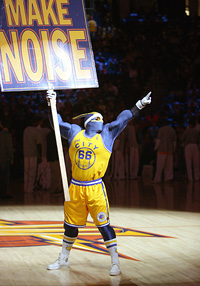 But it's all good. Your friends at GSoM got you covered. Jump for an early look! 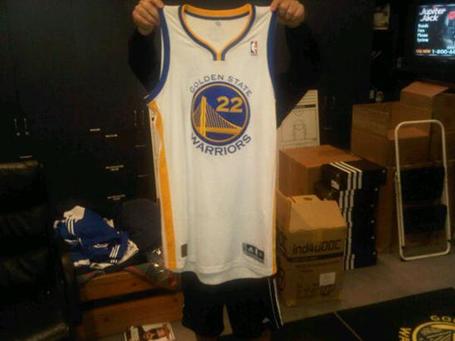 Thanks to GSoM reader AR4 IS A CRYBABY (interesting screen name) for the FanShot.

I was really hoping for some yellow home jerseys like The City, San Francisco Warriors, and Golden State Warriors jerseys of yester-year. I don't think these home whites aren't hot necessarily, but yellow would have been really fresh.

I could also do without the Indiana Pacers-like collar, but I guess we should give them a little shout out for taking Mike Dunleavy off our hands. Call it a memoriam of some sort. Come to think of it, maybe we should incorporate the Indy Cornrows logo somehow in the next GSoM look (hint, hint).

What are your thoughts on the Golden State Warriors new home jersey?