Home: Los Angeles Lakers (Silver Screen and Roll)
Away: Boston Celtics (Celitcs Blog)
Series: Lakers lead 1-0
Time: 5:00PM
TV: ABC
Boston looked bad in Game 1. They lacked energy and fire. None of the players seemed to be able to get into a rhythm and play with any sense of urgency. Much credit to the Lakers though. Once they got the big lead, they never gave the Celtics any hope. Will today be different?

So is this a must win for the Celtics? It's so hard to win the middle 3 games for the visiting team in this 2-3-2 format. Which means if they lose this game, they'll need to win 4 of 5 against the Lakers with possibly two of those wins being game 6 and 7 in LA.

The big difference from the 2008 Finals? Pau Gasol and Ron Artest. Gasol didn't play soft against KG. He dominated that matchup. Artest made a huge impact without taking too many shots. He made his presence known defensively and he even hit a huge nail-in-the-coffin 3. If Kobe gets support like this from his 2 other main guys, this series will be over quickly.

About Gasol, the big "controversy" since Game 1 have been his comments about his matchup with KG.

"[Garnett] is more of a jump shooter now you could say. He comes off the lane," Gasol responded. "On Kevin's part, he's also lost some explosiveness. Before he had a really, really quick first step and was getting to the lane and he was more aggressive then. Time passes and we all suffer it one way or another, but he's still a terrific player, a terrific competitor and he's going to bring everything he's got."

This is bulletin board material that should fire up KG. He'll ignore the last part of the comment saying KG is a terrific player and focus on the first part, the loss of explosiveness and aggressiveness. I can't imagine that a competitor like KG is going to not take this and get fired up about it. It seems pretty innocuous and what everyone already knows, but I'm sure some guys will take anything to help it fire them up. 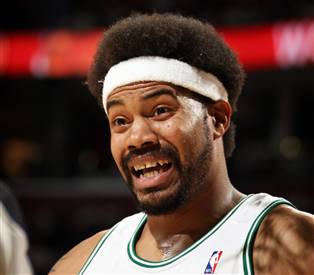 Just a random thought: Rasheed Wallace may not have been the reason the Celtics lost, but he certainly didn't help much. He may be one of the dumbest (and talented) players out there. In that 3rd quarter where the Celtics need stops to get back in the game, what does he do? 2 stupid fouls and a technical. Sweet.