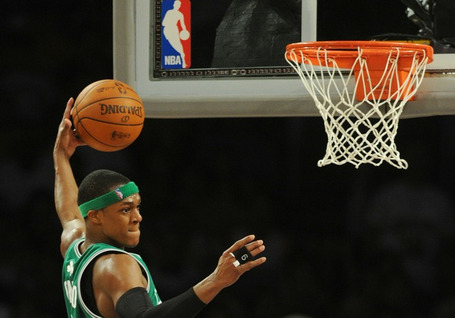 His to win now.

Wow, if someone had told you that the Celtics would win in LA without Kevin Garnett, what would you have thought? Garnett sat for most of game 2 with foul trouble, and finished with 6 points and 4 rebounds. And yet the Celtics looked throughout like the better team. What a difference a game makes. What happened?

Jump for rants, ravings, and a possible answer:

Well, to start, Doc Rivers owned Phil Jackson in this game. Phil using Kobe on Rondo, and trying to hide Fisher on Ray Allen? It worked in game 1, but not in game 2. Rivers attacked the Allen-Fisher matchup unmercifully, resulting in Allen breaking the Finals record for three-pointers en route to 32 points. When Jackson finally capitulated and switched Kobe to Allen, and Fisher back to Rondo, the focus of the Celtic offense switched immediately to Rondo, who commanded the floor in the second half. Brilliant, dynamic coaching. 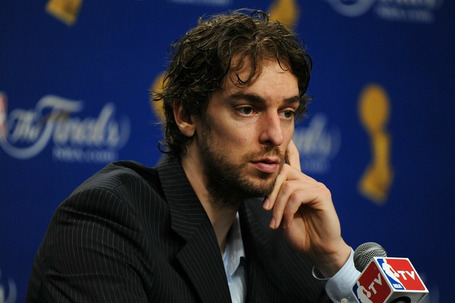 Just give me the damn ball.

Instead, we were treated to the spectacle of Kobe Bryant and Ron Artest in hero mode. Kobe quite understandably simply gave up on the triangle in the last six minutes, taking the ball at the top of the key and playing one-on-one. It worked great against Phoenix: he got to be the hero. Against the tough Celtics defense, he shot the Lakers out of the game, going 3-8 in the fourth quarter.

Ron Artest unveiled his own version of hero mode: He dribbled around the court like a light-maddened moth.

While Pau Gasol stood and watched. You have to look long and hard at Phil Jackson and his triangle offense after a fourth quarter performance like this one. Is there one other coach in the league who could have failed to get Pau Gasol one single shot in the fourth quarter of this game?

This is not Indiana high-school basketball (which produced Tex Winters). I love Hoosiers as much as anyone, but this is not the time nor place for Norman Dale, and "We're going to pass the ball three times." This is the NBA Finals, where the prescription for winning crunch-time offense is tried and true, and extraordinarily simple:

You run pick and roll for the two best basketball players on the planet, and then high-five your assistants.

The Lakers ran a considerable amount of pick and roll in Game 1, with devastating results. I thought the lightbulb had finally gone on for Phil Jackson. But it disappeared again in Game 2, with devastating results of the opposite kind. This to me is the biggest emerging theme of this series. Will Phil Jackson put the ball in Pau Gasol's hands, and use him the way God meant him to be used? If so, the Lakers can put enormous pressure on the Celtics weakest link, Kevin Garnett, and find a way to win a game in Boston and again take control of this series. If not, the Lakers are headed towards crushing defeat, and Phil Jackson towards ignominy.

Another emerging theme of this series is the obvious dominance of the Celtics bench. The Celtics hardly seemed to miss Garnett in the last game. The play of Rasheed Wallace and Big Baby Davis has been outstanding. I love watching Big Baby play defense: his ability, at his size, to move his feet and stay in front of Odom and Gasol is amazing. It's like watching The Incredible Hulk dance ballet. The Celtics big men have dominated Lamar Odom, who is averaging 4 points, 4.5 rebounds and 5 fouls so far in this series.

Tony Allen and Nate Robinson have also dominated their Lakers' counterparts, Jordan Farmar and Sasha Vujacic. Allen is a terrific defender and open-court player who is giving great minutes on Kobe Bryant. And Nate Robinson once again made a fourth quarter his own in the last game. He is playing with extraordinary fearlessness and poise, and giving Farmar fits on both sides of the ball. The Lakers bench simply cannot match up.

Which makes it even more imperative that Phil Jackson figures out how to use his starters.