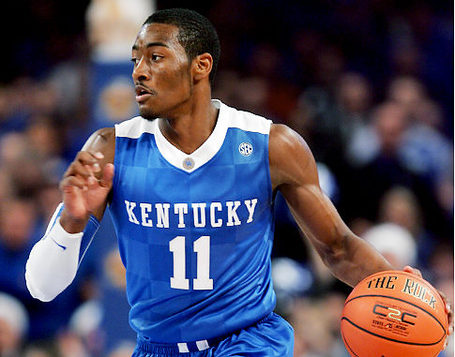 Had the ping pong balls not been so mean to us, we would have had John Wall.

Congratulations to Spain for beating the Netherlands in today's World Cup Final game! Since I spent the afternoon watching the World Cup game, and with game time approaching fast, I'll make this quick today. It was an ugly game yesterday as the Summer League Warriors got into garbage time by the 4th qtr. They ultimately lost to the Pistons by 20. Brandan Wright didn't play in the 2nd half yesterday. According to the Stephen Silas post game interviews, BWright had a minor shoulder bruise in the 1st half and was kept out for precautionary reasons since BWright hasn't played for very long, so no big worries there (as far as we know).

Otherwise, Summer League marches on today with the 3rd game in 3 days with another afternooner from Las Vegas. Today, we get to see the Summer League debut of the #1 draft pick, John Wall. (It's the Wizards' first Summer League game.) Too bad we won't get to see Stephen Curry school, er, play against John Wall.

Postgame: Stephen Silas in the hallway.